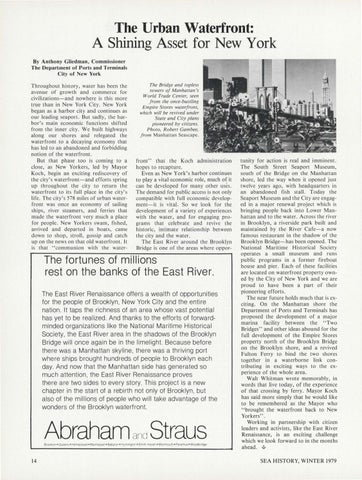 The Urban Waterfront: A Shining Asset for New York By Anthony Gliedman, Commissioner The Department of Ports and Terminals City of New York

Throughout history, water has been the avenue of growth and commerce for civilizations-and nowhere is this more true than in New York City. New York began as a harbor city and continues as our leading seaport. But sadly, the harbor's main economic functions shifted from the inner city. We built highways along our shores and relegated the waterfront to a decaying economy that has led to an abandoned and forbidding notion of the waterfront. But that phase too is coming to a close, as New Yorkers, led by Mayor Koch, begin an exciting rediscovery of the city's waterfront-and efforts spring up throughout the city to return the waterfront to its full place in the city's life . The city ' s 578 miles of urban waterfront was once an economy of sailing ships, river steamers, and ferries that made the waterfront very much a place for people. New Yorkers swam, fished, arrived and departed in boats, came down to shop, stroll, gossip and catch up on the news on that old waterfront. It is that "communion with the water-

The Bridge and topless towers of Manhattan 's World Trade Center, seen from the once-bustling Empire Stores waterfront, which will be revived under State and City plans pioneered by citizens. Photo, Robert Gambee, from Manhattan Seascape.

front" that the Koch administration hopes to recapture. Even as New York's harbor continues to play a vital economic role, much of it can be developed for many other uses. The demand for public access is not only compatible with full economic development-it is vital. So we look for the development of a variety of experiences with the water, and for engaging programs that celebrate and revive the historic, intimate relationship between the city and the water. The East River around the Brooklyn Bridge is one of the areas where oppor-

The fortunes of millions rest on the banks of the East River. The East River Renaissance offers a wealth of opportunities for the people of Brooklyn, New York City and the entire nation . It taps the richness of an area whose vast potential has yet to be realized . And thanks to the efforts of forwardminded organizations like the National Maritime Historical Society, the East River area in the shadows of the Brooklyn Bridge will once again be in the limelight. Because before there was a Manhattan skyline, there was a thriving port where ships brought hundreds of people to Brooklyn each day. And now that the Manhattan side has generated so much attention, the East River Renaissance proves there are two sides to every story. This project is a new chapter in the start of a rebirth not only of Brooklyn, but also of the millions of people who will take advantage of the wonders of the Brooklyn waterfront.

tunity for action is real and imminent. The South Street Seaport Museum, south of the Bridge on the Manhattan shore, led the way when it opened just twelve years ago, with headquarters in an abandoned fish stall. Today the Seaport Museum and the City are engaged in a major renewal project which is bringing people back into Lower Manhattan and to the water. Across the river in Brooklyn, a riverside park built and maintained by the River Cafe-a now famous restaurant in the shadow of the Brooklyn Bridge-has been opened. The National Maritime Historical Society operates a small museum and runs public programs in a former fireboat house and pier. Each of these faci lities are located on waterfront property owned by the City of New York and we are proud to have been a part of their pioneering efforts . The near future holds much that is exciting. On the Manhattan shore the Department of Ports and Terminals has proposed the development of a major marina facility between the "Two Bridges" and other ideas abound for the full development of the Empire Stores property north of the Brooklyn Bridge on the Brooklyn shore, and a revived Fulton Ferry to bind the two shores together in a waterborne link contributing in exciting ways to the experience of the whole area. Walt Whitman wrote memorably, in words that live today, of the experience of that crossing by ferry. Mayor Koch has said more simply that he would like to be remembered as the Mayor who "brought the waterfront back to New Yorkers". Working in partnership with citizen leaders and activists, like the East River Renaissance, is an exciting challenge which we look forward to in the months ahead. w SEA HISTORY, WINTER 1979