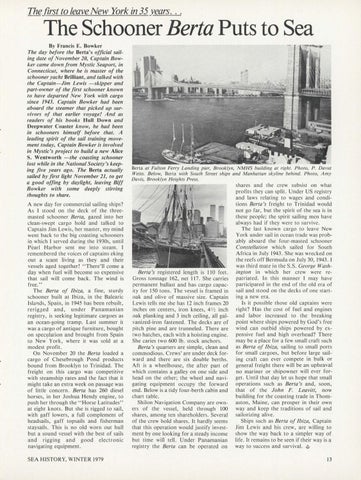 The Schooner Berta Puts to Sea By Francis E. Bowker The day before the Berta&#39;s official sailing date of November 20, Captain Bowker came down/rom Mystic Seaport, in Connecticut, where he is master of the schooner yacht Brilliant, and talked with the Captain-Jim Lewis -skipper and part-owner of the first schooner known to have departed New York with cargo since 1943. Captain Bowker had been aboard the steamer that picked up survivors of that earlier voyage! And as readers of his books Hull Down and Deepwater Coaster know, he had been in schooners himself be/ore that. A leading spirit of the sail training movement today, Captain Bowker is involved in Mystic&#39;s project to build a new Alice S. Wentworth -the coasting schooner lost while in the National Society&#39;s keeping five years ago. The Berta actually sailed by first light November 21, to get a good offing by daylight, leaving Bi// Bowker with some deeply stirring thoughts to share. A new day for commercial sailing ships? As I stood on the deck of the threemasted schooner Berta, gazed into her clean-swept cargo hold and talked to Captain Jim Lewis, her master, my mind went back to the big coasting schooners in which I served during the 1930s, until Pearl Harbor sent me into steam. I remembered the voices of captains eking out a scant living as they and their vessels aged together! &quot;There&#39;ll come a day when fuel will become so expensive that sail will come back. The wind is free.&quot; The Berta of Ibiza, a fine, sturdy schooner built at Ibiza, in the Balearic IslaTJds, Spain, in 1945 has been rebuilt, rerig ged and, under Panamanian registry, is seeking legitimate cargoes as an ocean-going tramp. Last summer it was a cargo of antique furniture, bought on speculation and brought from Spain to NewÂˇ York, where it was sold at a modest profit. On November 20 the Berta loaded a cargo of Chesebrough Pond products bound from Brooklyn to Trinidad. The freight on this cargo was competitive with steamship rates and the fact that it might take an extra week on passage was of little concern. Berta has 260 diesel horses, in her Joshua Hendy engine, to push her through the &quot;Horse Latitudes&quot; at eight knots . But she is rigged to sail, with gaff lowers, a full complement of headsails, gaff topsails and fisherman staysails. This is no old worn out hull but a sound vessel with the best of sails and rigging and good electronic navigating equipment. SEA HISTORY, WINTER 1979

Berta&#39;s registered length is 110 feet. Gross tonnage 162, net 117. She carries permanent ballast and has cargo capacity for 150 tons . The vessel is framed in oak and olive of massive size. Captain Lewis tells me she has 12 inch frames 20 inches on centers, iron knees, 4 Yi inch oak planking and 3 inch ceiling, all galvanized-iron fastened . The decks are of pitch pine and are trunneled. There are two hatches, each with a hoisting engine. She caries two 600 lb. stock anchors. Berta&#39;s quarters are simple, clean and commodious. Crews&#39; are under deck forward and there are six double berths . Aft is a wheelhouse, the after part of which contains a galley on one side and head on the other; the wheel and navigating equipment occupy the forward end. Below is a tidy four-berth cabin and chart table. Shilon Navigation Company are owners of the vessel, held through 100 shares, among ten shareholders . Several of the crew hold shares. It hardly seems that this operation would justify investment by one looking for a steady income but time will tell. Under Panamanian registry the Berta can be operated on

shares and the crew subsist on what profits they can split. Under US registry and laws relating to wages and conditions Berta&#39;s freight to Trinidad would not go far, but the spirit of the sea is in these people; the spirit sailing men have always had if they were to survive. The last known cargo to leave New York under sail in ocean trade was probably aboard the four-masted schooner Constellation which sailed for South Africa in July 1943. She was wrecked on the reefs off Bermuda on July 30, 1943. I was third mate in the S.S . George Washington in which her crew were repatriated . In this manner I may have participated in the end of the old era of sail and stood on the decks of one starting a new era. Is it possible those old captains were right? Has the cost of fuel and engines and labor increased to the breaking point where ships powered by God&#39;s free wind can outbid ships powered by expensive fuel and high overhead? There may be a place for a few small craft such as Berta of Ibiza, sailing to small ports for small cargoes, but before large sailing craft can ever compete in bulk or general freight there will be an upheaval no mariner or shipowner will ever forget. Until that day let us hope that small operations such as Berta&#39;s and, soon, that of the John F. Leavitt, now building for the coasting trade in Thomaston , Maine, can prosper in their own way and keep the traditions of sail and sailorizing alive . Ships such as Berta of Ibiza, Captain Jim Lewis and his crew, are willing to show the way back to a simpler way of life. It remains to be seen if their way is a way to success and survival. w 13