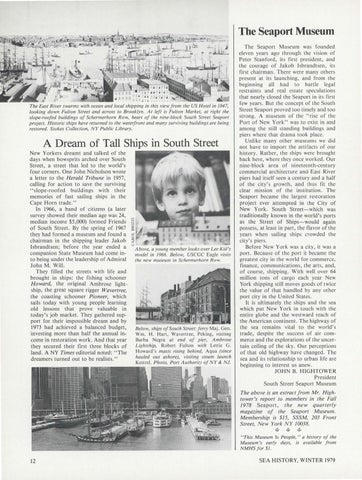 A Dream of Tall Ships in South Street New Yorkers dreamt and talked of the days when bowsprits arched over South Street, a street that led to the world&#39;s four corners. One John Nicholson wrote a Jetter to the Herald Tribune in 1957, calling for action to save the surviving &quot;slope-roofed buildings with their memories of fast sailing ships in the Cape Horn trade.&quot; In 1966, a band of citizens (a later survey showed their median age was 24, median income $5,000) formed Friends of South Street. By the spring of 1967 they had formed a museum and found a chairman in the shipping leader Jakob Isbrandtsen; before the year ended a companion State Museum had come into being under the leadership of Admiral John M. Will. They filled the streets with life and brought in ships: the fishing schooner Howard, the original Ambrose lightship, the great square rigger Wavertree, the coasting schooner Pioneer, which sails today with young people learning old lessons that prove valuable in today&#39;s job market. They gathered support for their impossible dream and by 1973 had achieved a balanced budget, investing more than half the annual income in restoration work. And that year they secured their first three blocks of land. A NY Times editorial noted: &quot;The dreamers turned out to be realists.&quot;

Above, a young member looks over lee Kiil&#39;s model in 1966. Below, USCGC Eagle visits the new museum in Schermerhorn Row.

The Seaport Museum was founded eleven years ago through the vision of Peter Stan ford, its first president, and the courage of Jakob lsbrandtsen, its first chairman . There were many others present at its launching, and from the beginning all had to battle legal restraints and real estate speculations that nearly closed the Seaport in its first few years. But the concept of the South Street Seaport proved too timely and too strong. A museum of the &quot;rise of the Port of New York&quot; was to exist in and among the still standing buildings and piers where that drama took place. Unlike many other museums we did not have to import the artifacts of our history. Rather, the ships were brought back here, where they once worked. Our nine-block area of nineteenth-century commercial architecture ancJ. East River piers had itself seen a century and a half of the city&#39;s growth, and thus fit the clear mission of the institution . The Seaport became the largest restoration project ever attempted in the City of New York. South Street-which was traditionally known in the world&#39;s ports as the Street of Ships-would again possess, at least in part, the flavor of the years when sailing ships crowded the city&#39;s piers. Before New York was a city, it was a port. Because of the port it became the greatest city in the world for commerce, finance, communications, the arts, and, of course, shipping. With well over 64 million tons of cargo each year New York shipping still moves goods of twice the value of that handled by any other port city in the United States. It is ultimately the ships and the sea which put New York in touch with the entire globe and the westward reach of the American continent. The highway of the sea remains vital to the world&#39;s trade, despite the success of air commerce and the explorations of the uncertain ceiling of the sky. Our perceptions of that old highway have changed. The sea and its relationship to urban life are beginning to interest us anew. JOHN B. HIGHTOWER President South Street Seaport Museum

The above is an extract from Mr. Hightower&#39;s report to members in the Fall J978 Seaport, the new quarterly magazine of the Seaport Museum. Membership is $15, SSSM, 203 Front Street, New York NY 10038.

&quot;This Museum Is People, &quot; a history of the Museum &#39;s early days, is available from NMHSfor$1.