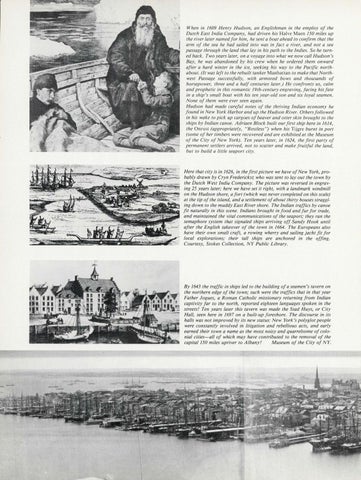 When in 1609 Henry Hudson, an Englishman in the employ of the Dutch East India Company, had driven his Hal ve Maen 150 miles up the river later named for him, he sent a boat ahead to confirm that the arm of the sea he had sailed into was in fa ct a river, and not a sea passage through the land that lay in his path to the Indies. So he turned back. Two years later, on a voyage into what we now call Hudson &#39;s Bay, he was abandoned by his crew when he ordered them onward after a hard winter in the ice, seeking his way to the Pacific northabout. (It was left to the rebuilt tanker Manhattan to make that Northwest Passage successfully, with armored bows and thousands of horsepower, three and a half centuries later.) He confronts us, calm and prophetic in this romantic 19th-century engraving, facing his fate in a ship&#39;s small boat with his ten year-old son and six loyal seamen. None of them were ever seen again. Hudson had made careful notes of the thriving Indian economy ht! found in New York Harbor and up the Hudson River. Others followed in his wake to pick up cargoes of beaver and otter skin brought to the ships by Indian canoe. Adriaen Block built ourfirst ship here in 1614, the Onrust (appropriately, &quot; Restless&quot;) when his Tijgre burnt in port (some of her timbers were recovered and are exhibited at the Museum of the City of New York) . Ten years later, in 1624, the first party of permanent settlers arrived, not to scatter and make fruitful the land, but to build a little seaport city.

Here that city is in 1626, in the first picture we have of New York, probably drawn by Cryn Fredericksz who was sent lo lay out the town by the Dutch West Indiu Company. The picture was reversed in engraving 25 years later; here we have set it right, with a landmark windmill on the Hudson shore, a fort (which was never completed on this scale) at the tip of the island, and a se//lement of about thirty houses straggling down to the muddy East River shore. The Indian traffics by canoe fit naturally in this scene. Indians brought in food and fur for trade, and maintained the vital communications of the seaport; they ran the semaphore system that signaled ships arriving off Sandy Hook until after the English takeover of the town in 1664. The Europeans also have their own small craft, a rowing wherry and sailing Jach/ fit for local explorations; their tall ships are anchored in the offing. Courtesy, Stokes Collection, NY Public Library.

By 1643 the traffic in ships led to the building ofa seamen&#39;s tavern on the northern edge of the town; such were the traffics that in that year Father Jogues, a Roman Catholic missionary returning from Indian captivity far lo the north, reported eighteen languages spoken in the streets! Ten years later this tavern was made the Siad Huys, or City Hall, seen here in 1697 on a built-up foreshore. The discourse in its halls was not improved by its new status: New York&#39;s polyglot people were constantly involved in litigation and rebellious acts, and early earned their town a name as the most noisy and quarrelsome of colonial cities-al/ of which may have contributed to the removal of the capital 150 miles upriver to Albany! Museum of the City of NY.