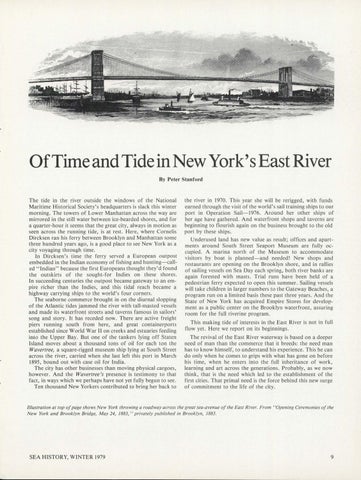 Of Time and Tide in New York&#39;s East River By Peter Stanford

The tide in the river outside the windows of the National Maritime Historical Society&#39;s headquarters is slack this winter morning. The towers of Lower Manhattan across the way are mirrored in the still water between ice-bearded shores, and for a quarter-hour it seems that the great city, always in motion as seen across the running tide, is at rest. Here, where Cornelis Dircksen ran his ferry between Brooklyn and Manhattan some three hundred years ago, is a good place to see New York as a city voyaging through time. In Dircksen&#39;s time the ferry served a European outpost embedded in the Indian economy of fishing and hunting-called &quot;Indian&quot; because the first Europeans thought they&#39; d found the outskirts of the sought-for Indies on these shores. In succeeding centuries the outpost became gateway to an empire richer than the Indies, and this tidal reach became a highway carrying ships to the world&#39;s four corners . The seaborne commerce brought in on the diurnal slopping of the Atlantic tides jammed the river with tall-masted vessels and made its waterfront streets and taverns famous in sailors&#39; song and story. It has receded now . There are active freight piers running south from here, and great containerports established since World War II on creeks and estuaries feeding into the Upper Bay. But one of the tankers lying off Staten Island moves about a thousand tons of oil for each ton the Wavertree, a square-rigged museum ship lying at South Street across the river, carried when she last left this port in March 1895, bound out with case oil for India. The city has other businesses than moving physical cargoes, however. And the Wavertree&#39;s presence is testimony to that fact, in ways which we perhaps have not yet fully begun to see. Ten thousand New Yorkers contributed to bring her back to

the river in 1970. This year she will be rerigged, with funds earned through the visit of the world&#39;s sail training ships to our port in Operation Sail-1976. Around her other ships of her age have gathered . And waterfront shops and taverns are beginning to flourish again on the business brought to the old port by these ships. Underused land has new value as result; offices and apartments around South Street Seaport Museum are fully occupied. A marina north of the Museum to accommodate visitors by boat is planned-and needed! New shops and restaurants are opening on the Brooklyn shore, and in rallies of sailing vessels on Sea Day each spring, both river banks are again forested with masts. Trial runs have been held of a pedestrian ferry expected to open this summer. Sailing vessels will take children in larger numbers to the Gateway Beaches, a program run on a limited basis these past three years. And the State of New York has acquired Empire Stores for development as a public center on the Brooklyn waterfront, assuring room for the full riverine program . This making tide of interests in the East River is not in full flow yet. Here we report on its beginnings. The revival of the East River waterway is based on a deeper need of man than the commerce that it breeds: the need man has to know himself, to understand his experience . This he can do only when he comes to grips with what has gone on before his time, when he enters into the full inheritance of work, learning and art across the generations . Probably, as we now think, that is the need which led to the establishment of the first cities. That primal need is the force behind this new surge of commitment to the life of the city.

Illustration a/ lop of page shows New York throwing a roadway across the great sea-avenue of the East River. From &quot;Opening Ceremonies of the New York and Brooklyn Bridge, May 24, 1883, &quot;privately published in Brookly n, 1883.