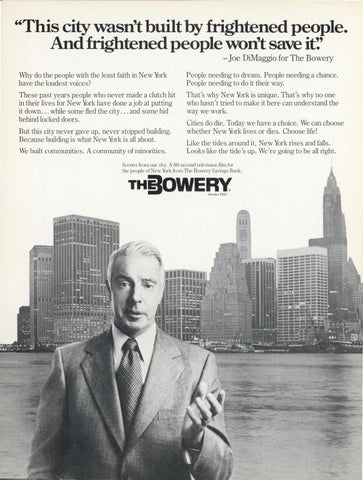 &quot;This city &quot;Wasn&#39;t built by frightened people. And frightened people \Von&#39;t save it~&#39; - Joe DiMaggio for The Bowery Why do the people with the least faith in New York have the loudest voices?

These past years people who never made a clutch hit in their lives for New York have done a job at putting it down ... while some fl ed the city ... and some hid behind locked doors.

But this city never gave up, never stopped building. Because building is what New York is all about. We built communities. A community of minorities.

Cities do die. Today we have a choice. We can choose whether New York lives or dies. Choose life! Like the tides around it, New York rises and falls. Looks like the tide &#39;s up. We &#39;re going to be all right.

Scenes from our city. A 90-second television film for the people of ew York from Th e Bowery Savings Bank .