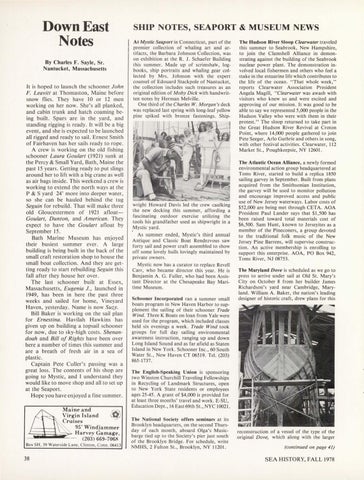 By Charles F. Sayle, Sr. Nantucket, Massachusetts It is hoped to launch the schooner John F. Leavitt at Thomaston, Maine before s now flies. They have 10 or 12 men working on her now. She&#39;s all planked, and cabin trunk and hatch coaming being built. Spars are in the yard, and standing rigging is ready. It will be a big event, and she is expected to be laun ched all rigged and ready to sail. Ernest Smith of Fairhaven has her sails ready to rope. A crew is working on the old fishing schooner Laura Goulart (1921) sunk at the Percy &amp; Small Yard, Bath, Maine the past 15 years. Getting ready to put slings around her to lift with a big crane as well as air bags inside. This weekend a crew is working to extend the north ways at the P &amp; S yard 24&#39; more into deeper water, so she can be hauled behind the tug Seguin for rebuild . That will make three old Gloucestermen of 1921 afloatGoulart, Dunton, and American. They expect to have the Goulart afloat by September 15 . Bath Marine Museum has enjoyed their busiest summer ever. A large building is being built in the back of the small craft restora tion shop to house the small boat collection. And they are getting ready to start rebuilding Seguin this fall after they hou se her over. The last schooner built at Essex, Massachusetts, Eugenia J., launched in 1949, has been in here the past three weeks and sailed for home, Vineyard Haven, yesterday. Name is now Suzy. Bill Baker- is working on the sail plan for Ernestina. Havilah Hawkins has given up on building a topsail schooner for now, due to sky-high costs. Shenandoah and Bill of Rights have been over Âˇ here a number of times this summer and are a breath of fresh air in a sea of plastic . Captain Pete Culler&#39;s passing was a great loss . The contents of hi s shop are going to Mystic, and 1 understand they would like to move shop and all to set up at the Seaport. Hope you have enjoyed a fine summer.

At Mystic Seaport in Connecticut, part of the premier collection of whaling art and artifacts, the Barbara Johnson Collection, was on exhibition at the R. J. Schaefer Building this summer. Made up of scrimshaw, logbooks, ship portraits and whaling gear collected by Mrs. Johnson with the expert counsel of Edouard Stackpole of Nantucket, the collection includes such treasures as an original edition of Moby Dick with handwritten notes by Herman Melville. One third of the Charles W. Morgan&#39;s deck was replaced last spring with long-leaf yellow pine spiked with bronze fastenings. Ship-

The Hudson River Sloop Clearwater traveled this summer to Seabrook, New Hampshire, to join the Clamshell Alliance in demonstrating against the building of the Seabrook nuclear power plant. The demonstration involved local fishermen and others who feel a stake in the estuarine life which contributes to the life of the ocean. &quot;That whole week,&quot; reports Clearwater Association President Angela Magill, &quot;Clearwater was awash with visitors who knew us a nd were excited and approving of our miss ion. It was good to be able to say we represented 5,000 people iri the Hudson Valley who were with them in their protest.&quot; The sloop returned to take part in the Great Hudson River Revival at Croton Point, where 14,000 people gathered to join Pete Seeger, Ario Guthrie and others in song, with other festival activities. Clearwater, 112 Market St., Poughkeepsie, NY 12601. The Atlantic Ocean Alliance, a newly formed environmental action group headquartered at Toms River, started to build a replica 1850 saili ng garvey in September. Built from plans acquired from the Smithsonian Institution, the garvey will be used to monitor pollution a nd encourage improved access and public use of New Jersey waterways. Labor costs of $52,000 are being met through CETA. AOA President Paul Lander says that $1,500 has been raised toward total materials cost of $6,500. Sam Hunt, known to Jerseyites as a member of the Pineconers, a group devoted to the traditional folk music of the New Jersey Pine Barrens, will supervise construction. An active membership is enrolling to support this enterprise. AOA, PO Box 942, Toms River, NJ 08753. The Maryland Dove is scheduled as we go to press to arrive under sail at Old St. Mary&#39;s City on October 8 from her builder James Richardson&#39;s yard near Cambridge, Maryland. William A. Baker, the nation&#39; s leading designer of historic craft, drew plans for this

The English-Speaking Union is sponsoring two Winston Churchill Traveling Fellowships in Recycling of Landmark Structures, open to New York State residents or employees ages 25-45. A grant of $4,000 is provided for at least three months &#39; travel and work. E-SU, Education Dept., 16 East 69th St., NYC 10021. The National Society offers seminars at its Brooklyn headquarters, on the seco nd Thursday of each month, aboard Olga&#39;s Musicbarge tied up to the Society&#39;s pier just south of the Brooklyn Bridge. For schedule, write NMHS, 2 Fulton St., Brooklyn, NY 11201.

reconstruction of a vessel of the type of the original Dove, which along with the larger