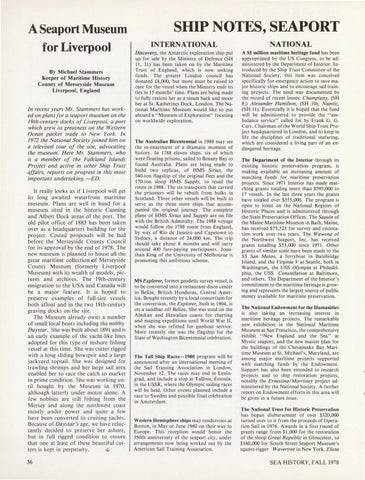 In recent years Mr. Stammers has worked on plans for a seaport museum on the 19th-century docks of Liverpool, a port which grew to greatness on the Western Ocean packet trade to New York. In 1972 the National Society joined him on a televised tour of the site, advocating the museum. Here Mr. Stammers, who is a member of the Falkland Islands Project and active in other Ship Trust affairs, reports on progress in this most important undertaking.-ED. It really looks as if Liverpool will get its long awaited waterfront maritime museum. Plans are well in hand for a museum sited in the historic Canning and Albert Dock areas of the port. The old pilot office of 1883 has been taken over as a headquarters building for the project. Costed proposals will be laid before the Merseyside County Council for its approval by the end of 1978. The new mu se um is planned to hou se all the great maritime collection &lt;&gt;f Merseyside County Museum (formerly Liverpool Museum) with its wealth of models, pictures and archives. The 19th-century emigration to the USA and Canada will be a major feature. It is hoped to preserve examples of full-si ze vessels both afloat and in the two 18th-century grav ing docks on the site. The Museum already owns a number of small local boats including the nobby Daystar. She was built about 1891 and is an early example of the yacht- lik e lines adopted for this type of inshore fishing vessel at this time. She was cutter rigged with a long sliding bows prit and a large jackyard topsail. She was designed for traw ling s hrimps and her large sail area enabled her to race the catch to market in prime condition. She was working until bought by the Museum in 1970, although latterly under motor alone. A few nobbies are still fishing from the Mersey and along the northwest coast mostly under power and quite a few have been converted to cruising yachts. Because of Daystar&#39;s age, we have reluctantly decided to preserve her ashore, but in full rigged condition to ensure that one at least of these beautiful cutters is kept in perpetuity.

Discovery, the Antarctic exploration ship put up for sale by the Ministry of Defence (SH 11 , 31) has been taken on by the Maritime Trust of England, which is now seeking funds. The greater London council has donated ÂŁ4,000, but more must be raised to care for the vessel when the Ministry ends its ties in 15 months&#39; time. Plans are being made to fully restore her as a steam bark and moor her at St. Katherines Dock, London . The National Maritime Museum would like to put aboard a &quot;Museum of Explorat ion&quot; focusing on worldwide exploration.

A $5 million maritime heritage fund has been appropriated by the US Congress, to be administered by the Department of Interior. Introduced by the Ship Trust Committee of the National Society, this item was conceived specifically for emergency action to save major historic ships and to encourage sail training projects . The need was documented by the record of recent losses: Champigny, (SH 8;) Alexander Hamilton, (SH 10); Niantic, (SH 11). Essentially it is hoped that the fund will be administered to provide the &quot;ambulance service&quot; called for by Frank G. G. Carr, Chairman of the World Ship Trust Project headquartered in London, and to keep in life the disciplines of traditional seafaring, which are considered a living part of an endangered heritage.

The Australian Bicentennial in 1988 may see the re-enactment of a dramatic moment of history. In 1788 eleven ships. six of which were floating prisons, sailed to Botany Bay to found Australia. Plans are being made to build two replicas, of HMS Sirius, the 540-ton flagship of the original fleet and the 170-ton sloop HMS Supply, to resail the route in 1988. The six transports that carried the prisoners will be rebuilt from hulks in Scotland . Three other vessels will be built to serve as the three store ships that accompanied the original journey. The complete plans of HMS Sirius and Supply are on file with the British Admiralty. The 1988 voyage would follow the 1788 route from England, by way of Rio de Janeiro and Capetown to Sydney, a distance of 24,000 km. The trip should take about 8 months and will carry around 400 fare-paying participants. Jonathan King of the University of Melbourne is promoting this ambitious scheme.

MS Explorer, former geodetic survey vessel, is to be converted into a restaurant-disco center in Belize, British Honduras, Central America. Bought recently by a local consortium for the conversion, the Explorer, built in 1904, is on a sandbar off Belize. She was used on the Alaskan and Hawaiian coasts for charting and maping expeditions until World War II, when she was refitted for gunboat service. More recently she was the flagship for the State of Washington Bicentennial celebration.

The Tall Ship Races-1980 program will be announced after an international meeting of the Sail Training Association in London, November 12. The races may end in Leningrad , and include a stop at Tallinn, Estonia, in the USSR, where the Olympic sailing races will be held . Other events planned include a race to Sweden and possible final celebration in Amsterdam.

Western Hemisphere ships may rendezvous at Boston, in May or June 1980 on their way to Europe. This reception would honor the 350th anniversary of the seaport city, under arrangements now being worked out by the American Sail Training Association.

The Department of the Interior through its existing historic preservation program, is making available an increasing amount of matching funds for maritime preservation projects. Since 1971 Interior has made matching grants totaling more than $595,000 to 17 vessels. In the last three years the grants have totaled over $355,000. The program is open to items on the National Register of Historic Places and is administered through the State Preservation Offices. The Saguin of the Maine Maritime Museum in Bath, Maine, has received $73,523 for survey and restoration work over two years. The Wawona of the Northwest Seaport, Inc. has received grants totalling $53,000 since 1971. Other grants of sim ilar scale have been made to the SS San Mateo, a ferryboat in Bainbridge Island, and the Virginia Vat Seattle, both in Washington, the USS Olympia at Philadelphia, the USS Constellation at Baltimore, and others. The Department of the Interior&#39;s commitment to the maritime heritage is growing and represents the largest source of public money available for maritime preservation. The National Endowment for the Humanities is also taking an increasing interest in maritime heritage projects. The remarkable new exhibition in the National Maritime Museum at San Francisco, the comprehensive exhibit &quot;New England and the Sea&quot; at Mystic seaport, and the new master plan for the buildings of the Chesapeake Bay Maritime Museum at St. Michael&#39;s, Maryland, are among major maritime projects supported with matching funds by the Endowment. Support has also been extended to research projects and to ship restoration projects, notably the Ernestina/ Morrissey project administered by the National Society. A further report on Endowment efforts in this area will be given in a future issue. The National Trust for Historic Preservation has begun disbursement of over $320,000 turned over to it from the proceeds of Operation Sail in 1976. Awards in a first round of grants range from $1,000 for the restoration of the sloop Great Republic in Gloucester, to $160,000 for South Street Seaport Museum&#39;s square-rigger Wavertree in New York. Elissa SEA HISTORY, FALL 1978