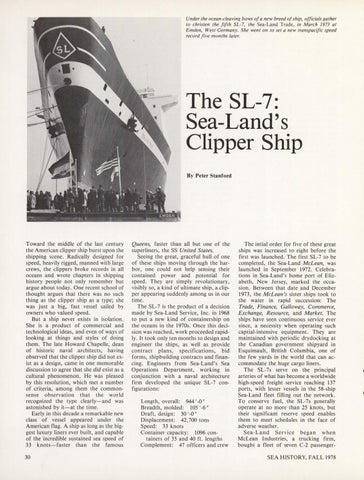 Under the ocean-cleaving bows of a new breed of ship, officials gather to christen the fifth SL-7, the Sea-Land Trade, in March 1973 at Emden, West Germany. She went on to set a new transpacific speed record five months later.

Toward the middle of the last century the American clipper ship burst upon the shipping scene. Radically designed for speed, heavily rigged, manned with large crews, the clippers broke records in all oceans and wrote chapters in shipping history people not only remember but argue about today. One recent school of thought argues that there was no such thing as the clipper ship as a type; she was just a big, fast vessel sailed by owners who valued speed. But a ship never exists in isolation. She is a product of commercial and technological ideas, and even of ways of looking at things and styles of doing them. The late Howard Chapelle, dean of historic naval architects, having observed that the clipper ship did not ex. ist as a design, came in one memorable discussion to agree that she did exist as a cultural phenomenon. He was pleased by this resolution, which met a number of criteria, among them the commonsense observation that the world recognized the type clearly-and was astonished by it-at the time. Early in this decade a remarkable new class of vessel appeared under the American flag. A ship as long as the biggest luxury liners ever built, and capable of the incredible sustained sea speed of 33 knots-faster than the famous 30

Queens, faster than all but one of the superliners, the SS United States. Seeing the great, graceful hull of one of these ships moving through the harbor, one could not help sensing their contained power and potential for speed. They are simply revolutionary, visibly so, a kind of ultimate ship, a clipper appearing suddenly among us in our time. The SL-7 is the product of a decision made by Sea-Land Service, Inc. in 1968 to put a new kind of containership on the oceans in the 1970s. Once this decision was reached, work proceeded rapidly. It took only ten months to design and engineer the ships, as well as provide contract plans, specifications, bid forms, shipbuilding contracts and financing. Engineers from Sea-Land&#39;s Sea Operations Department, working in conjunction with a naval architecture firm developed the unique SL-7 configurations: Length, overall: 944 &#39;-0&quot; Breadth, molded: 105 &#39;-6&quot; Draft, design: 30 &#39;-0&quot; Displacement: 42, 700 tons Speed: 33 knots Container capacity: 1096 containers of 35 and 40 ft. lengths Complement: 47 officers and crew

The intial order for five of these great ships was increased to eight before the first was launched. The first SL-7 to be completed, the Sea-Land McLean, was launched in September 1972. Celebrations in Sea-Land&#39;s home port of Elizabeth, New Jersey, marked the occasion. Between that date and December 1973, the McLean&#39;s sister ships took to the water in rapid succession: The

Trade, Finance, Galloway, Commerce, Exchange, Resource, and Market. The ships have seen continuous service ever since, a necessity when operating such captial-intensive equipment. They are maintained with periodic drydocking at the Canadian government shipyard in Esquimault, British Columbia, one of the few yards in the world that can accommodate the huge cargo liners. The SL-7s serve on the principal arteries of what has become a worldwide high-speed freight service reaching 137 ports, with lesser vessels in the 58-ship Sea-Land fleet filling out the network. To conserve fuel, the SL-7s generally operate at no more than 25 knots, but their significant reserve speed enables them to meet schedules in the face of adverse weather. Sea-Land Service began when McLean Industries, a trucking firm, bought a fleet of seven C-2 passengerSEA HISTORY, FALL 1978