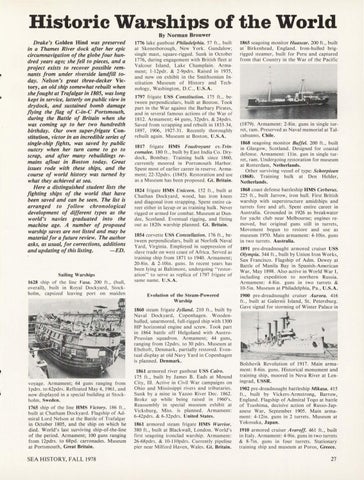 Historic Warships of the World By Norman Brouwer

Drake's Golden Hind was preserved in a Thames River dock after her epic circumnavigation of the globe four hundred years ago; she fell to pieces, and a project exists to recover possible remnants from under riverside landfill today. Nelson's great three-decker 路 Victory, an old ship somewhat rebuilt when she fought at Trafa/gar in I 805, was long kept in service, latterly on public view in drydock, and sustained bomb damage flying the flag of C-in-C Portsmouth, during the Battle of Britain when she was coming up to her two hundredth birthday. Our own super-frigate Constitution, victor in an incredible series of single-ship fights, was saved by public outcry when her turn came to go to scrap, and after many rebuildings remains afloat in Boston today. Great issues rode with these ships, and the course of world history was turned by what they achieved at sea. Here a distinguished student lists the fighting ships of the world that have been saved and can be seen. The list is arranged to foil ow chronological development of different types as the world's navies graduated into the machine age. A number of proposed warship saves are not listed and may be material/or a future review. The author asks, as usual, for corrections, additions and updating of this listing. -ED.