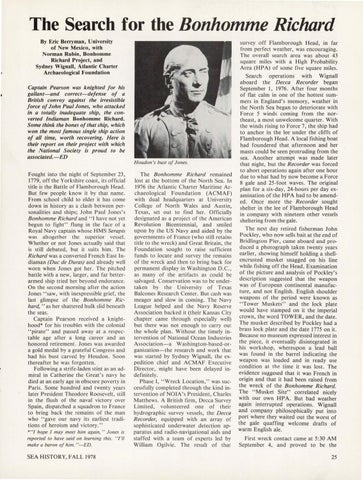 Captain Pearson was knighted for his gallant-and correct-defense of a British convoy against the irresistible force of John Paul Jones, who attacked in a totally inadequate ship, the converted lndiaman Bonhomme Richard. Some think the bones of that ship, which won the most famous single ship action of all time, worth recovering. Here is their report on their project with which the National Society is proud to be associated. - ED Houdon &#39;s bust of Jones.

Fought into the night of September 23, 1779, off the Yorkshire coast, its official title is the Battle of Flam borough Head. But few people know it by that name. From school child to elder it has come down in history as a clash between personalities and ships; John Paul Jones&#39;s Bonhomme Richard and &quot;I have not yet begun to fight&quot; flung in the face of a Royal Navy captai n whose HMS Serapis was altogether the superior vessel. Whether or not Jones actually said that is still debated, but it suits him . The Richard was a converted French East lndiaman (Due de Duras) and already well worn when Jones got her. The pitched battle with a new, larger, and far betterarmed ship tried her beyo nd endurance. On the second morning after the action Jones &quot; saw, with inexpressible grief, the last glimpse of the Bonhomme Richard, &quot; as her shattered hulk slid beneath the seas. Captain Pearson received a knighthood* for his troubles with the colonial &quot;pirate&quot; and passed away at a respectable age after a long career and an honored retirement. Jones was awarded a gold medal by a grateful Congress and had his bust carved by Houdon . Soon thereafter he was forgotten. Following a strife-laden stint as an admiral in Catherine the Great&#39;s navy he died at an early age in obscure poverty in Paris. Some hundred and twenty years later President Theodore Roosevelt, still in the flush of the naval victory over Spain, dispatched a squadron to France to bring back the remains of the man who &quot;gave our navy its earliest traditions of heroism and victory.&quot; *&quot;! hope l may meet him again, &quot; Jones is reported lo have said on learning this. &quot;I&#39;ll make a baron of him. &quot;-ED.

The Bonhomme Richard remained lost at the bottom of the North Sea. In 1976 the Atlantic Charter Maritime Archaeologica l Foundation (ACMAF) with dual headquarters at University College of North Wales and Austin, Texas, set out to find her. Officially designated as a project of the American Revolution Bicentennial, and smiled upon by the US Navy and aided by the governments of France (who still retains title to the wreck) and Great Britain, the Foundation sought to raise sufficient funds to locate and survey the remains of the wreck and then to bring back for permanent display in Washington D. C., as many of the artifacts as could be salvaged . Conservation was to be undertaken by the University of Texas Balcones Research Center. But cash was meager and slow in coming. The Navy League helped and the Navy Reserve Association backed it (their Kansas City chapter came through especially well) but there was not enough to carry out the whole plan . Without the timely intervention of National Ocean Industries Association-a Washington-based-organization-the research and work that was started by Sydney Wignall, the expedition chief and ACMAF Executive Director, might have been delayed indefinitely. Phase I, &quot;Wreck Location,&quot; was successfully completed through the kind intervention of NOIA&#39;s President, Charles Matthews. A British firm, Decca Survey Limited, volunteered one of their hydrographic survey vessels, the Decca Recorder, equipped with an array of sophisticated underwater detec~ion apparatus and radio-navigational aids and staffed with a team of experts led by William Ogi lvie. The result of that

survey off Flamborough Head, in far from perfect weather, was encouraging. The overall search area was about 43 square miles with a High Probability Area (HPA) of some five square miles. Search operations with Wignall aboard the Decca Recorder began September I, 1976. After four months of flat calm in one of the hottest summers in England&#39;s memory, weather in the North Sea began to deteriorate with Force 5 winds coming from the northeast, a most unwelcome quarter. With the winds rising to Force 7, the ship had to anchor in the lee under the cliffs of Flamborough Head. A local fishing boat had foundered that afternoon and her masts could be seen protruding from the sea. Another attempt was made later that night, but the Recorder was forced to abort operations again after one hour due to what had by now become a Force 8 gale and 25-foot waves . The original plan for a six-day, 24-hours per day examination of the HP A had to be amended. Once more the Recorder sought shelter in the lee of Flamborough Head in company with nineteen other vessels sheltering from the gale. The next day retired fisherman John Pockley, who now sells bait at the end of Bridlington Pier, came aboard and produced a photograph taken twenty years earlier, showing himself holding a shellencrusted musket snagged on his line while fishing off the Head. Examination of the picture and analysis of Pockley&#39;s description suggested that the weapon was of European continental manufacture, and not English. English shoulder weapons of the period were known as &quot;Tower Muskets&quot; and the lock plate would have stamped on it the imperial crown, the word TOWER, and the date. The musket described by Pockley had a brass lock plate and the date 1775 on it. Because no museum expressed interest in the piece, it eventually disintegrated in his workshop, whereupon a lead ball was found in the barrel indicating the weapon was loaded and in ready use condition at the time it was lost. The evidence suggesed that it was French in origin and that it had been raised from the wreck of the Bonhomme Richard. The &quot;Musket Site&quot; correlated nicely with our own HP A. But bad weather again interrupted operations. Wignall and company philosophically put into port where they waited out the worst of the gale quaffing welcome drafts of warm English ale. First wreck contact came at 5:30 AM September 4, and proved to be the 25