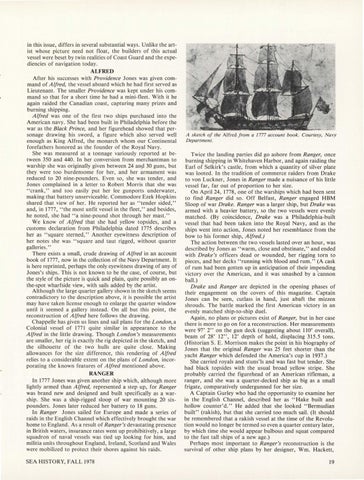 in this issue, differs in several substantial ways. Unlike the artist whose picture need not float, the builders of this actual vessel were beset by twin realities of Coast Guard and the expediencies of navigation today.

ALFRED After his successes with Providence Jones was given command of Alfred, the vessel aboard which he had first served as Lieutenant. The smaller Providence was kept under his command so that for a short time he had a mini-fleet. With it he again raided the Canadian coast, capturing many prizes and burning shipping. Alfred was one of the first two ships purchased into the American navy. She had been built in Philadelphia before the war as the Black Prince, and her figurehead showed that personage drawing his sword, a figure which also served well enough as King Alfred, the monarch whom our Continental forefathers honored as the founder of the Royal Navy. She was measured at a tonnage variously reported at between 350 and 440. In her conversion from merchantman to warship she was originally given between 24 an~ 30 guns, but they were too burdensome for her, and her armament was reduced to 20 nine-pounders. Even so, she was tender, and Jones complained in a Jetter to Robert Morris that she was &quot;crank,&quot; and too easily put her lee gunports underwater, making that battery unserviceable. Commodore Ezek Hopkins shared that view of her. He reported her as &quot;tender sided,&quot; and, in 1777, &quot;the most unfit vessel in the fleet,&quot; and besides, he noted, she had &quot;a nine-pound shot through her mast.&quot; We know of Alfred that she had yellow topsides, and a customs declaration from Philadelphia dated 1775 describes her as &quot;square sterned,&quot; Another eyewitness description of her notes she was &quot;square and taut rigged, without quarter galleries.&#39;&#39; . There exists a small, crude drawing of Alfred in an account book of 1777, now in the collection of the Navy Department. It is here reprinted, perhaps the only eyewitness drawing of any of Jones&#39;s ships. This is not known to be the case, of course, but the style of the picture is quick and plain, quite possibly an onthe-spot wharfside view, with sails added by the artist. Although the large quarter gallery shown in the sketch seems contradictory to the description above, it is possible the artist may have taken license enough to enlarge the quarter window until it seemed a gallery instead. On all but this point, the reconstruction of Alfred here follows the drawing. Chappelle has given us lines and sail plans for the London, a Colonial vessel of 1771 quite similar in appearance to the Alfred in the little drawing. Though London&#39;s measurements are smaller, her rig is exactly the rig depicted in the sketch, and the silhouette of the two hulls are quite close. Making allowances for the size difference, this rendering of Alfred relies to a considerable extent on the plans of London, incorporating the known features of Alfred mentioned above.

RANGER In 1777 Jones was given another ship which, although more lightly armed than Alfred, represented a step up, for Ranger was brand new and designed and built specifically as a warship. She was a ship-rigged sloop of war mounting 20 sixpounders. Jones later reduced her battery to 18 guns. In Ranger Jones sailed for Europe and made a series of raids in the English Channel which effectively brought the war home to England. As a result of Ranger&#39;s devastating presence in British waters, insurance rates went up prohibitively, a large squadron of naval vessels was tied up looking for him, and militia units throughout England, Ireland, Scotland and Wales were mobilized to protect their shores against his raids. SEA HISTORY, FALL 1978

A sketch of the Alfred from a 1777 account book. Courtesy, Navy Department.

Twice the landing parties did go ashore from Ranger, once burning shipping in Whitehaven Harbor, and again raiding the Earl of Selkirk&#39;s castle, from which a quantity of silver plate was looted. In the tradition of commerce raiders from Drake to von Luckner, Jones in Ranger made a nuisance of his little vessel far, far out of proportion to her size. On April 24, 1778, one of the warships which had been sent to find Ranger did so. Off Belfast, Ranger engaged HBM Sloop of war Drake. Ranger was a larger ship, but Drake was armed with a heavier battery, so the two vessels were evenly matched. (By coincidence, Drake was a Philadelphia-built vessel that had been taken into the Royal Navy, and as the ships went into action, Jones noted her resemblance from the bow to his former ship, Alfred.) The action between the two vessels lasted over an hour, was described by Jones as &quot;warm, close and obstinate,&quot; and ended with Drake&#39;s officers dead or wounded, her rigging torn to pieces, and her decks &quot;running with blood and rum.&quot; (A cask of rum had been gotten up in anticipation of their impending victory over the American, and it was smashed by a cannon ball.) Drake and Ranger are depicted in the opening phases of their engagement on the covers of this magazine. Captain Jones can be seen, cutlass in hand, just abaft the mizzen shrouds. The battle marked the first American victory in an evenly matched ship-to-ship duel. Again, no plans or pictures exist of Ranger, but in her case there is more to go on for a reconstruction. Her measurements were 97&#39; 2&quot; on the gun deck (suggesting about I 10&#39; overall), beam of 28&#39; 12&quot;, 12&#39; depth of hold, displacing 315.5 tons. (Historian S. E. Morrison makes the point in his biography of Jones that the original Ranger was 25 feet shorter than the yacht Ranger which defended the America&#39;s cup in 1937.) She carried royals and stuns&#39;ls and was fast but tender. She had black topsides with the usual broad yellow stripe. She probably carried the figurehead of an American rifleman, a ranger, and she was a quarter-decked ship as big as a small frigate, comparatively undergunned for her size. A Captain Gurley who had the opportunity to examine her in the English Channel, described her as &quot;Hake built and hollow counter&#39;d.&quot; He added that she looked &quot;Bermudian built&quot; (rakish), but that she carried too much sail. (It should be remembered that a rakish vessel at the time of the Revolution would no longer be termed so even a quarter century later, by which time she would appear bulbous and squat compared to the fast tall ships of a new age.) Perhaps most important to Ranger&#39;s reconstruction is the survival of other ship plans by her designer, Wm. Hackett, 19