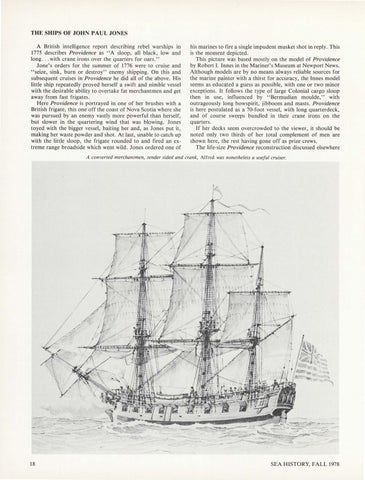 THE SHIPS OF JOHN PAUL JONES A British intelligence report describing rebel warships in 1775 describes Providence as &quot;A sloop, all black, low and long . .. with crane irons over the quarters for oars.&#39;&#39; Jone&#39;s orders for the summer of 1776 were to cruise and &quot;seize, sink, burn or destroy&quot; enemy shipping. On this and subsequent cruises in Providence he did all of the above. His little ship repeatedly proved herself a swift and nimble vessel with the desirable ability to overtake fat merchantmen and get away from fast frigates. Here Providence is portrayed in one of her brushes with a British frigate, this one off the coast of Nova Scotia.where she was pursued by an enemy vastly more powerful than herself, but slower in the quartering wind that was blowing. Jones toyed with the bigger vessel, baiting her and, as Jones put it, making her waste powder and shot. At last, unable to catch up with the little sloop, the frigate rounded to and fired an extreme range broadside which went wild. Jones ordered one of

his marines to fire a single impudent musket shot in reply. This is the moment depicted. This picture was based mostly on the model of Providence by Robert I. Innes in the Mariner&#39;s Museum at Newport News. Although models are by no means always reliable sources for the marine painter with a thirst for accuracy, the Innes model seems as educated a guess as possible, with one or two minor exceptions . It follows the type of large Colonial cargo sloop then in use, influenced by &quot;Bermudian moulde,&quot; with outrageously long bowspirit, jibboom and masts. Providence is here postulated as a 70-foot vessel, with long quarterdeck, and of course sweeps bundled in their crane irons on the quarters. If her decks seem overcrowded to the viewer, it should be noted only two thirds of her total complement of men are shown here, the rest having gone off as prize crews. The life-size Providence reconstruction discussed elsewhere

A converted merchantmen, tender sided and crank, Alfred was nonetheless a useful cruiser.