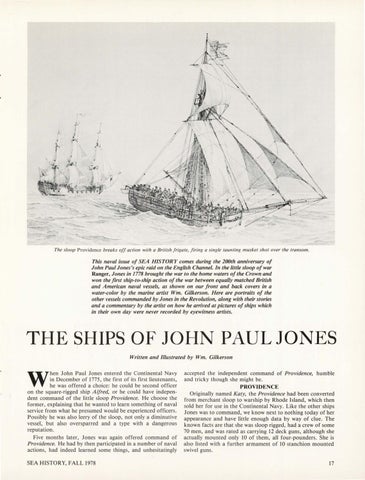 The sloop Providence breaks off action with a British frigate, firing a single taunting musket shot over the transom.

This naval issue of SEA HISTORY comes during the 200th anniversary of John Paul Jones&#39;s epic raid on the English Channel. In the little sloop of war Ranger, Jones in 1778 brought the war to the home waters of the Crown and won the first ship-to-ship action of the war between equally matched British and American naval vessels, as shown on our front and back covers in a water-color by the marine artist Wm. Gilkerson. Here are portraits of the other vessels commanded by Jones in the Revolution, along with their stories and a commentary by the artist on how he arrived at pictures of ships which in their own day were never recorded by eyewitness artists.

THE SHIPS OF JOHN PAUL JONES Written and Illustrated by Wm. Gilkerson hen John Paul Jones entered the Continental Navy in December of 1775, the first of its first lieutenants, he was offered a choice: he could be second officer on the square-rigged ship Alfred, or he could have independent command of the little sloop Providence. He choose the former, explaining that he wanted to learn something of naval service from what he presumed would be experienced officers. Possibly he was also leery of the sloop, not only a diminutive vessel, but also oversparred and a type with a dangerous reputation. Five months later, Jones was again offered command of Providence. He had by then participated in a number of naval actions, had indeed learned some things, and unhesitatingly

accepted the independent command of Providence, humble and tricky though she might be. PROVIDENCE Originally named Katy, the Providence had been converted from merchant sloop to warship by Rhode Island, which then sold her for use in the Continental Navy . Like the other ships Jones was to command, we know next to nothing today of her appearance and have little enough data by way of clue. The known facts are that she was sloop rigged, had a crew of some 70 men, and was rated as carrying 12 deck guns, although she actually mounted only IO of them, all four-pounders . She is also listed with a further armament of IO stanchion mounted swivel guns. 17