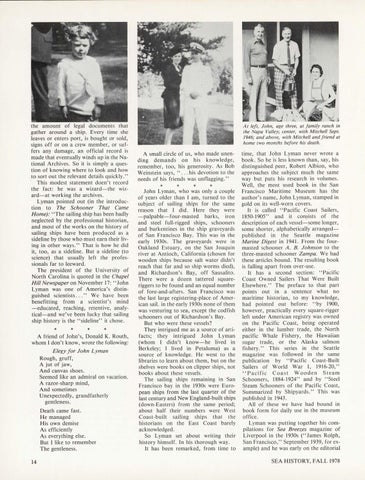 the amount of legal documents that gather around a sh ip . Every time she leaves or enters port, is bought or sold, signs off or on a crew member, or suffers any damage, an official record is made that eventually winds up in the National Archives . So it is simply a question of knowing where to look and how to sort out the relevant details quickly. &quot; Âˇ This modest statement doen&#39;t record the fact: he was a wizard-the wi zard-at working the archives . Lyman pointed out (in the introduction to The Schooner That Came Home): &quot;The sai ling ship has been badly neglected by the professional historian, and most of the works on the history of sailing ships have been produced as a sideline by those who must earn their living in other ways .&quot; That is how he did it, too, as a sideline . But a sideline (to science) that usually left the professionals far to leeward. The president of the University of North Carolina is quoted in the Chapel Hill Newspaper on November 17: &quot;John Lyman was one of America&#39;s distinguished scientists ... &quot; We have been benefitting from a scientist&#39;s mind -educated , reaching, retentive, analytical-and we&#39;ve been lucky that sailing ship history is the &quot;sideline&quot; it chose.

Elegy for John Lyman Rough, gruff, A jut of jaw, And canvas shoes. Seemed like an admiral on vacation. A razor-sharp mind, And sometimes Unexpectedly, grandfatherly gentleness. Death came fast. He managed His own demise As efficiently As everything else. But I like to remember The gentleness . 14

At left, John, age three, at family ranch in the Napa Valley; center, with Mitchell Sept. 1946; and above, with Mitchell and friend at home two months before his death.

A small circle of us, who made unending demands on his knowledge, remember, too, his generosity. As Bob Weinstein says, &quot; .. . his devotion to the needs of his friends was unflagging.&quot;

John Lyman, who was only a couple of years older than I am, turned to the subject of sailing ships for the same reason that I did. Here they were -palpable-four-masted barks, iron and steel full-rigged ships, schooners and barkentines in the ship graveyards of San Francisco Bay. This was in the early 1930s. The graveyards were in Oakland Estuary, on the San Joaquin river at Antioch, California (chosen for wooden ships because salt water didn&#39;t reach that far and so ship worms died), and Richardson&#39;s Bay, off Sausalito. There were a dozen tattered squareriggers to be found and an equal number of fore-and-afters. San Francisco was the last large registering-place of American sail. in the early 1930s none of them was venturing to sea, except the codfish schooners out of Richardson&#39;s Bay. But who were these vessels? They intrigued me as a source of artifacts; they intrigued John Lyman (whom I didn&#39;t know-he lived in Berkeley; I lived in Petaluma) as a source of knowledge . He went to the libraries to learn about them, but on the shelves were books on clipper ships, not books about these vessels. The sailing ships remaining in San Francisco bay in the 1930s were European ships from the last quarter of the last century and New England-built ships (down-Easters) from the same period ; about half their numbers were West Coast-built sailing ships that the historians on the East Coast barely acknowledged. So Lyman set about writing their history himself. In his thorough way . It has been remarked, from time to

time, that John Lyman never wrote a book . So he is less known than, say, his distinguished peer, Robert Albion, who approaches the subject much the same way but puts his research in volumes. Well, the most used book in the San Francisco Maritime Museum has the author&#39;s name , John Lyman, stamped in gold on its well-worn covers. It is called &quot;Pacific Coast Sailers, 1850-1905&quot; and it con,sists of the description of each vessel-some longer, some shorter, a lphabetically arrangedpublished in the Seattle magazine Marine Digest in 1941. From the fourmasted schooner A. B. Johnson to the three-masted schooner Zampa. We had these articles bound . The resulting book is falling apart from over-use. It has a second section: &quot;Pacific Coast Owned Sailers That Were Built Elsewhere .&quot; The preface to that part points out in a sentence what no maritime historian, to my knowledge, had pointed out before: &quot;by 1900, however, practically every square-rigger left under American registry was owned on the Pacific Coast, being operated either in the lumber trade, the North pacific Whale Fishery, the Hawaiian sugar trade, or the Alaska salmon fishery.&quot; This series in the Seattle magazine was followed in the same publication by &quot;Pacific Coast-Built Sailers of World War I, 1916-20,&quot; &quot;Pacific Coast Wooden Steam Schooners, 1884-1924&quot; and by &quot;Steel Steam Schooners of the Pacific Coast, Summarized by Shipyards.&quot; This was published in 1943 . A ll of these we have had bound in book form for daily use in the museum office. Lyman was putting together his compilation s for Sea Breezes magazine of Liverpool in the 1930s (&quot;James Rolph, San Francisco,&quot; September I 939, for example) and he was early on the editorial SEA HISTORY, FALL 1978