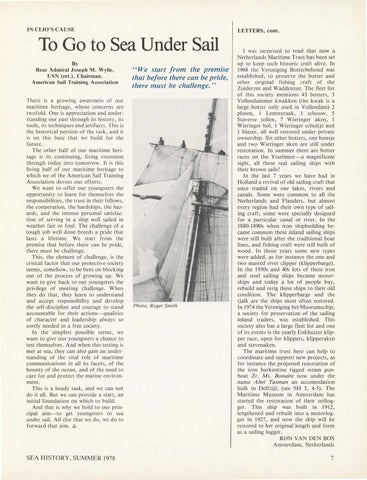 To Go to Sea Under Sail By Rear Admiral Joseph M. Wylie, USN (rel.), Chairman, American Sail Training Association There is a growing awareness of our maritime heritage, whose concerns are twofold. One is appreciation and understanding our past through its history, its tools, its techniques and artifacts. This is the historical portion of the task, and it is on this base that we build for the future. The other half of our maritime heritage is its continuing, living extension through today into tomorrow . It is this living half of our maritime heritage to which we of the American Sail Training Association devote our efforts. We want to offer our youngsters the opportunity to learn for themselves the responsibilities, the trust in their fellows, the cooperation, the hardships, the hazards, and the intense personal satisfaction of serving in a ship well sailed in weather fair or foul. The challenge of a tough job well done breeds a pride that lasts a lifetime. We start from the premise that before there can be pride, there must be challenge. This, the element of challenge, is the critical factor that our protective society seems, somehow, to be bent on blocking out of the process of growing up. We want to give back to our youngsters the privilege of meeting challenge. When they do that, they learn to understand and accept responsibility and develop the self-discipline and courage to stand accountable for their actions-qualities of character and leadership always so sorely needed in a free society. In the Âˇ simplest possible terms, we want to give our youngsters a chance to test themselves. And when this testing is met at sea, they can also gain an understanding of the vital role of maritime communications in all its facets, of the bounty of the ocean, and of the need to care for and protect the marine environment. This is a heady task, and we can not do it all. But we can provide a start, an initial foundation on which to build. And that is why we hold to our principal aim-to get youngsters to sea under sail. All else that we do, we do to forward that aim. w

&quot;We start from the premise that before there can be pride, there must be challenge. &#39;&#39;

1 was surprised to read that now a Netherlands Maritime Trust has been set up to keep such historic craft alive. In 1968 the Vereniging Botterbehoud was established, to preserve the batter and other original fishing craft of the Zuiderzee and Waddenzee. The fleet list of this society mentions 43 batters, 3 Vollendammer kwakken (the kwak is a large batter only used in Vollendam) 2 pluten, 1 Lemsteraak, I schouw, 5 Staverse jollen, 7 Wieringer aken, 1 Wieringer bol, 1 Wieringer schuitje and I blazer, all well restored under private ownership. Six other batters, one bonsje and two Wieringer aken are still under restoration. In summer there are batter races on the Ysselmeer-a magnificent sight, all these real sailing ships with their brown sails! In the last 7 years we have had in Holland a revival of old sailing craft that once traded on our lakes, rivers and canals. Some were common to all the Netherlands and Flanders, but almost every region had their own type of sailing craft; some were specially designed for a particular canal or river. In the 1880-l 890s when iron shipbuilding became common these inland sailing ships were still built after the traditional boat lines, and fishing craft were still built of wood. In those years some new types were added, as for instance the one and two masted river clipper (klipperbarge). In the 1930s and 40s lots of these iron and steel sailing ships became motorships and today a lot of people buy, rebuild and rerig these ships to their old condition. The klipperbarge and the tjalk are the ships most often restored. In 1974 the Vereniging het Museumschip, a society for preservation of the sailing inland traders, was established. This society also has a large fleet list and one of its events is the yearly Enkhuizer klipper race, open for klippers, klipperaken and stevenaken. The maritime trust here can help to coordinate and support new projects, as for instance the proposed restoration of the iron barkentine rigged steam gunboat Zr. Ms. Bonaire now under the name A be! Tasman an accomodation hulk in Delfzijl, (see SH 3, 4-5). The Maritime Museum in Amsterdam has started the restoration of their zeillogger. This ship was built in 1912, lengthened and rebuilt into a motorlogger in 1927, and now the ship will be restored to her original length and form as a sailing lugger. RON VAN DEN BOS Amsterdam, Netherlands