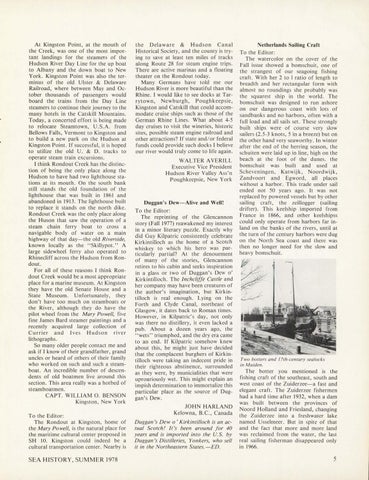 At Kingston Point, at the mouth of the Creek, was one of the most important landings for the steamers of the Hudson River Day Line for the up boat to Albany and the down boat to New York. Kingston Point was also the terminus of the old Ulster & Delaware Railroad, where between May and October thousands of passengers would board the trains from the Day Line steamers to continue their journey to the many hotels in the Catskill Mountains. Today, a concerted effort is being made to relocate Steamtown, U.S.A. from Bellows Falls, Vermont to Kingston and to build a new park on the Hudson at Kingston Point. If successful, it is hoped to utilize the old U. & D. tracks to operate steam train excursions. I think Rondout Creek has the distinction of being the only place along the Hudson to have had two lighthouse stations at its mouth. On the south bank still stands the old foundation of the lighthouse that was built in 1861 and abandoned in 1913. The lighthouse built to replace it stands on the north dike. Rondout Creek was the only place along the Huson that saw the operation of a steam chain ferry boat to cross a navigable body of water on a main high way of that day-the old Riverside, known locally as the "Skillypot." A large sidewheel ferry also operated to Rhinecliff across the Hudson from Rondout. For all of these reasons I think Rondout Creek would be a most appropriate place for a marine museum. At Kingston they have the old Senate House and a State Museum. Unfortunately, they don't have too much on steamboats or the River, although they do have the pilot whee l from the Mary Powell, five fine James Bard steamer paintings and a recently acquired large collection of Currier and Ives Hudson river lithographs. So many older people contact me and ask if I know of their grandfather, grand uncles or heard of others of their family who worked on such and such a steamboat. An incredible number of descendents of old boatmen live around this section. This area really was a hotbed of steamboat men. CAPT. WILLIAM 0. BENSON Kingston, New York To the Editor: The Rondout at Kingston, home of the Mary Powell, is the natural place for the maritime cultural center proposed in SH 10. Kingston could indeed be a cultural transportation center. Nearby is

the Delaware & Hudson Canal Historical Society, and the county is trying to save at least ten miles of tracks along Route 28 for steam engine trips. There are active marinas and a noating theater on the Rondout today. Many Germans have told me our Hudson River is more beautiful than the Rhine. I would like to see docks at Tarrytown, Newburgh, Poughkeepsie, Kingston and Catskill that cou ld accommodate cruise ships such as those of the German Rhine Lines. What about 4-5 day cruises to visit the wineries, historic sites, possible steam engine railroad and other attractions? If state and/ or federal funds could provide such docks I believe our river would truly come to life again. WALTER AVERILL Executive Vice President Hudson River Valley Ass'n Poughkeepsie, New York

Duggan's Dew-Alive and Well! To the Editor: The reprinting of the Glencannon story (Fall 1977) reawakened my interest in a minor li terary puzzle. Exactly why did Guy Kilpatric consistently celebrate Kirkintilloch as the home of a Scotch whiskey to which his hero was particularly partial? At the denouement of many of the stories, Glencannon retires to his cabin and seeks inspiration in a glass or two of Duggan's Dew o' Kirkintilloch. The Jnchcliffe Castle and her company may have been creatures of the author's imagination, but Kirkintilloch is real enough. Lying on the Forth and Clyde Canal, northeast of Glasgow, it dates back to Roman times. However, in Kilpatric's day, not only was there no distillery, it even lacked a pub. About a dozen years ago, the "wets" triumphed, and the dry era came to an end. If Kilpatric somehow knew about this, he might just have decided that the complacent burghers of Kirkintilloch were taking an indecent pride in their righteous abstinence, surrounded as they were, by municialities that were uproariously wet. This might explain an impish determination to immortalize this particular place as the source of Duggan's Dew. JOHN HARLAND Kelowna, B.C., Canada

Duggan 's Dew o 'Kirkintilloch is an actual Scotch! It's been around for 40 years and is imported into the U.S. by Duggan 's Distilleries, Yonkers, who sell it in the Northeastern States. -ED.

Netherlands Sailing Craft To the Editor: The watercolor on the cover of the Fall issue showed a bomschuit, one of the strangest of our seagoing fishing craft. With her 2 to l ratio of length to breadth and her rectangular form with almost no roundings she probably was the squarest ship in the world. The bomschuit was designed to run ashore on our dangerous coast with lots of sandbanks and no harbors, often with a full load and all sails set. These strongly built ships were of course very slow sailers (2.5-3 knots, 5 in a breeze) but on the other hand very seaworthy. In winter after the end of the herring season, the schuiten were laid up in line, high on the beach at the foot of the dunes. the bomschuit was built and used at Scheveningen, Katwijk, Noordw ijk , Zandvoort and Egword, a ll places without a harbor. This trade under sail ended not 50 years ago. It was not replaced by powered vesse ls but by other sailing craft, the zei llogger (sailing drifter). This keelship imported from France in 1866, and ot her keelshipss could on ly operate from harbors far inland on the banks of the rivers, until at the turn of the century harbors were dug on the North Sea coast and there was then no longer need for the slow and heavy bomschuit.

Two batters and 17th-centwy sea/ocks in Muiden. The botter you mentioned is the fishing craft of the southeast, south and west coast of the Zu iderzee-a fast and elegant craft. The Zuiderzee fishermen had a hard time after 1932, when a dam was built between the provinces of Noord Holland and Friesland, changing the Zuiderzee into a freshwater lake named Usselmeer. But in spite of that and the fact that more and more land was reclaimed from the water, the last real sailing fisherman disappeared only in 1966.