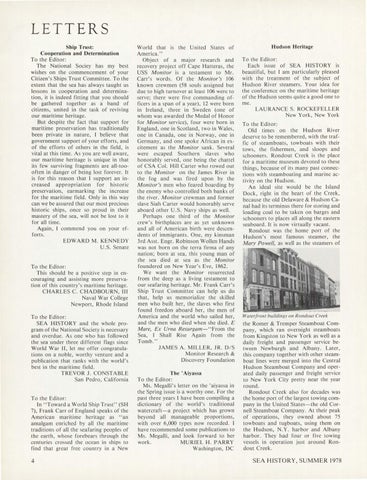 LETTERS Ship Trust: Cooperation and Determination To the Editor: The National Sociey has my best wishes on the commencement of your Citizen's Ships Trust Committee. To the extent that the sea has always taught us lessons in cooperation and determination, it is indeed fitting that you should be gathered together as a band of citizens, united in the task of reviving our maritime heritage. But despite the fact that support for maritime preservation has traditionally been private in nature, I believe that government support of your efforts, and of the efforts of others in the field, is vital at this time. As you are well aware, our maritime heritage is unique in that its few surviving fragments are all-toooften in danger of being lost forever. It is for this reason that I support an increased appropriation for hi sto ric preservation, earmarking the increase for the maritime field. Only in this way can we be assured that our most precious historic ships, once so proud in their mastery of the sea, will not be lost to it for all time. Again, I commend you on your efforts. EDWARD M. KENNEDY U.S . Senate

To the Editor: This should be a positive step in encouraging and assisting more preservation of this country's maritime heritage. CHARLES C. CHADBOURN, Ill Naval War College Newport, Rhode Island To the Editor: SEA HISTORY and the whole program of the National Society is necessary and overdue. As one who has followed the sea under three different flags si nce World War II, let me offer congratulations on a noble, worthy venture and a publication that ranks with the world's best in the maritime field. TREVORJ.CONSTABLE San Pedro, California

To the Editor: In "Toward a World Ship Tru st" (SH 7), Frank Carr of England speaks of the American maritime heritage as "an amalgam enriched by all the maritime traditions of all the seafaring peoples of the earth, whose forebears through the centuries crossed the ocean in ships to find that great free country in a New

World that is the United States of America.'' Object of a major research and recovery project off Cape Hatteras, the USS Monitor is a testament to Mr. Carr's words. Of the Monilor's 106 known crewmen (58 sou ls assigned but due to high turnover at least 106 were to serve; there were five commanding officers in a span of a year), 12 were born in Ireland ; three in Sweden (one of whom was awarded the Medal of Honor for Monitor service), four were born in England, one in Scotland, two in Wales, one in Canada, one in Norway, one in Germany, and one spoke African in excitement as the Monitor sank. Several were escaped Southern slaves who honorably served, one being the chattel of CSA Col. Hill Carter who rowed out to the Monitor on the James River in the fog and was fired upon by the Monitor's men who feared boarding by the enemy who controlled both banks of the river. Monitor crewman and former slave Siah Carter would honorably serve aboard other U.S . Navy ships as well. Perhaps one third of the Monitor crew's birthplaces are as yet unknown and all of American birth were descendents of immigrants. One, my kinsman 3rd Asst. Engr. Robinso n Wollen Hands was not born on the terra firma of any nation; born at sea, this young man of the sea died at sea as the Monitor foundered on New Year's Eve, 1862. We want the Monitor resurrected from the deep as a living testament to our seafaring heritage. Mr. Frank Carr's Ship Trust Committee can help us do that, help us memorialize the skilled men who built her, the slaves who first found freedon aboard her, the men of America and the world who sailed her, and the men who died when she died. E Mare, Ex Urna Resurgam-"From the Sea, I Shall Rise Again from the Tomb." JAMES A. MILLER, JR. D/ S Monitor Research & Discovery Foundation The 'Aiyassa To the Editor: Ms. Megalli's letter on the 'aiyassa in the Spring issue is a worthy one. For the past three years I have been compiling a dictionary of the world's traditional watercraft-a project which has grown beyond all manageable proportions, with over 6,000 types now recorded. I have recommended some publications to Ms . Megalli, and look forward to her MURIEL H . PARRY work. Washington, DC

Hudson Heritage To the Editor: Each iss ue of SEA HISTORY is beautiful, but I am particularly pleased with the treatment of the subject of Hudso n River steamers. Your idea for the conference on the maritime heritage of the Hudso n seems quite a good one to me. LAURANCES. ROCKEFELLER New York, New York To the Editor: Old times on the Hudson River deserve to be remembered, with the traffic of steamboats, towboats with their tows, the fishermen, and sloops and schooners. Rondout Creek is the place for a maritime museum devoted to these things, because of its many past connections with steamboating and marine activity on the Hudson . An ideal site would be the Island Dock, right in the heart of the Creek, because the old Delaware & Hudso n Canal had its terminus there for storing and loading coal to be taken on barges and schooners to places all along the eastern sea board . It is now virtually vacant. Rondout was the home port of the Hudson's most famous steamer, the Mary Powell, as well as the steamers of

the Romer & Tremper Steamboat Company, which ran overnight steamboats from Kingston to New York as well as a daily freight and passenger service between Newburgh and Albany. Later, this company together with other steamboat lines were merged into the Central Hudson Steamboat Company and operated daily passenger and freight service to New York City pretty near the year round. Rondout Creek also for decades was the home port of the largest towing company in the United States-the old Cornell Steamboat Company. At their peak of operations, they owned about 75 towboats and tugboats, using them on the Hudson, N. Y. harbor and Albany harbor. They had four or five towing vessels in operation just around Rondout Creek.