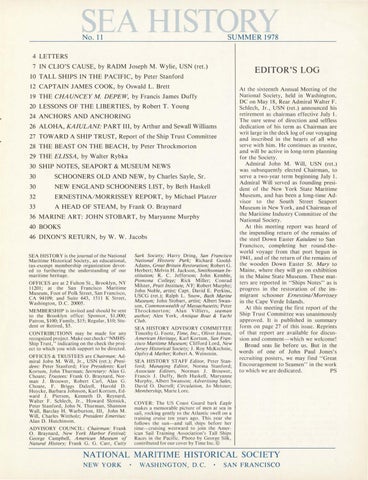 10 TALL SHIPS IN THE PACIFIC, by Peter Stanford 12 CAPTAIN JAMES COOK, by Oswald L. Brett 19 THE CHAUNCEY M. DEPEW, by Francis James Duffy 20 LESSONS OF THE LIBERTIES, by Robert T. Young 24 ANCHORS AND ANCHORING 26 ALOHA, KA/ULAN!: PART III, by Arthur and Sewall Williams 27 TOWARD A SHIP TRUST, Report of the Ship Trust Committee 28 THE BEAST ON THE BEACH, by Peter Throckmorton 29 THE ELISSA, by Walter Rybka 30 SHIP NOTES, SEAPORT &amp; MUSEUM NEWS 30

A HEAD OF STEAM, by Frank 0. Braynard

At the sixteenth Annual Meeting of the National Society, held in Washington, DC on May 18, Rear Admiral Walter F. Schlech, Jr., USN (ret.) announced his retirement as chairman effective July I . The sure se nse of direction and selness dedication of his term as Chairman are writ large in the deck log of our voyaging and inscribed in the hearts of all who serve with him. He continues as trustee, and will be active in long-term planning for the Society. Admiral John M. Will, USN (ret.) was subsequently elected Chairman, to serve a two-year term beginning July I. Admiral Will served as founding president of the New York State Maritime Muse um, and has been a long-time Advisor to the South Street Seaport Museum in New York, and Chairman of the Maritime Industry Committee of the National Society. At this meeting report was heard of the impending return of the remains of the steel Down Easter Kaiulani to San Francisco, completing her round-theworld voyage from that port begun in 1941 , and of the return of the remains of the wooden Down Easter St. Mary to Maine, where they will go on exhibition in the Maine State Museum. These matters are reported in &quot;Ships Notes&quot; as is progress in the restoration of the immigrant schooner Ernestina/Morrissey in the Cape Verde Islands. At this meeting the first report of the Ship Trust Committee was unanimously approved. It is published in summary form on page 27 of this issue. Reprints of that report are available for di sc ussion and comment-which we welcome! Broad seas lie before us. But in the words of one of John Paul Jones&#39;s recruiting posters, we may find &quot;Great Encouragement to Seamen&quot; in the work to which we are dedicated. PS

COYER: The US Coast Guard bark Eagle makes a memorable picture of men at sea in sail, rocking gently to the Atlantic swell on a training cruise ten years ago. Thi s year she follow s the sun-and tall. ships before her time-cruising westward lo join the American Sail Training Association&#39;s Tall Ships Races in the Pacific. Photo by George Silk, co ntributed for our cover by Time Inc.Â©