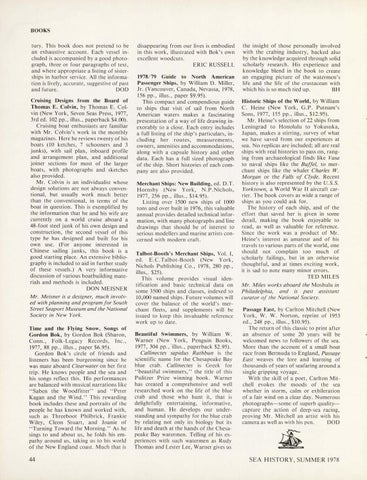 BOOKS tury. This book does not pretend to be an exhaustive account. Each vessel included is accompanied by a good photograph, three or four paragraph s of text, and where appropriate a list ing of sisterships in harbor service. All the information is lively, accurate, suggest ive of past and future. DOD Cruising Designs from the Board of Thomas E. Colvin, by Thomas E. Colvin (New York, Seven Seas Press, 1977, 3rd ed. 102 pp., illus., paperback $4.00). Cruising boat enthusiasts are familiar with Mr. Colvin's work in the monthly magazines. Here he reviews twenty of his boats (10 ketches, 7 schooners and 3 junks), with sail plan, inboard profile and arrangement plan, and additional joiner sections for most of the larger boats, with photographs and sketches also provided . Mr. Colvin is an individualist whose design solutions are not always conventional, but usually work much better than the conventional, in terms of the boat in question. This is exemplified by the information that he and hi s wife are currently on a world cruise aboard a 48-foot steel junk of his own design and construction, the second vessel of this type he has designed and built for his own use . (For anyone interested in Chinese sailing junks, this book is a good starting place. An extensive bibliography is included to aid in further study of these vessels.) A very informative discussion of various boat.building materials and methods is included . DON MEISNER

Mr. Meisner is a designer, much involved with planning and program for South Street Seaport Museum and the National Society in New York. Time and the Flying Snow, Songs of Gordon Bok, by Gordon Bok (Sharon , Conn., Folk-Legacy Records, Inc., 1977, 88 pp., illus., paper $6.95). Gordon Bok 's circle of friends and listeners has been burgeoning since he was mate aboard Clearwater on her first trip. He knows people and the sea and his songs reflect this. His performances are balanced with musical narrations like "Saben the Woodfitter" and "Peter Kagan and the Wind." This rewarding book includes these and portraits of the people he has known and worked with, such as Threeboot Philbrick, Frankie Wiley, Cleon Stuart, and Joanie of "Turning Toward the Morning." As he sings to and about us, he folds his empathy around us, taking us to hi s world of the New England coast. Much that is

di sappeari ng from our lives is embodied in this work, illustrated with Bok's own excellent woodcuts. ERIC RUSSELL 1978179 Guide to North American Passenger Ships, by William D . Miller, Jr. (Vancouver, Canada, Nevassa, 1978, 156 pp., illus., paper $9.95). This compact and compendious guide to ships that visit of sail from North American waters makes a fascinating presentation of a way of life drawing inexorably to a close. Each entry includes a full list ing of the ship's particulars, including her routes, measurements, owners, amenities and accommodations, along with a capsule history and other data. Each has a full sized photograph of the ship. Short histories of each company are also provided. Merchant Ships: New Building, ed. D.T. Hornsby (New York, N.P.Nichols, 1977, 256 pp., illus., $14.95). Listing over 1500 new ships of 1000 tons and over built in 1976, this valuable annual provides detailed technical information, with many photographs and line drawings that should be of interest to serious modellers and marine artists concerned with modern craft. Talbot-Booth's Merchant Ships, Vol. I, ed. E.C.Talbot-Booth (New York, Nichols Publishing Co., 1978 , 280 pp., illus, . $25). This volume provides visual identification and basic technical data on some 3500 ships and classes, indexed to 10,000 named ships. Future volumes will cover the balance of the world's merchant fleets, and supplements will be issued to keep this invaluable refere nce work up to date . Beautiful Swimmers, by William W. Warner (New York, Penguin Book s, 1977, 304 pp. , Âˇillus., paperback $2.95). Callinectes sapidus Rathbun is the scientific name for the Chesapeake Bay blue crab. Cal/inectes is Greek for "beautiful swimmers," the title of this Pulitzer Prize winning book. Warner has created a comprehensive and well researched work on the life of the blue crab and those who hunt it , that Is delightfully entertaining, informative, and human. He develops our understanding and sympathy for the blue crab by relating not only its biology but its life and death at the hands of the Chesapeake Bay watermen. Telling of his experiences with such watermen as Rud y Thomas and Lester Lee, Warner gives us

the insight of those perso nally involved with the crabing industry, backed also by the knowledge acquired through solid scholarly research. His experience and knowledge blend in the book to create an engaging picture of the watermen's life and the life of the crustacean with BH which hi s is so much tied up. Historic Ships of the World, by William C . Heine (New York, G.P. Putnam's Sons, 1977, 155 pp., illus., $12.95). Mr. Heine' s selection of 22 ships from Leningrad to Honolulu to Yokusuka, Japan, makes a sti rring, survey of what we have saved from our experiences at sea. No replicas are included; all are real ships with real histories to pass on, ranging from archaeological finds like Vasa to naval ships like the Buffet, to merchant ships like the whaler Charles W. Morgan or the Falls of Clyde. Recent history is also represented by the U.S.S. Yorktown, a World War II aircraft carrier. The book covers as wide a range of ships as you could ask for. The history of each ship, and of the effort that saved her is given in some detail, making the book enjoyable to read, as well as valuable for reference. Since the work was a product of Mr. Heine' s interest as amateur and of his travels to various parts of the world, one should not complain too much of scholarly failings, but in an otherwise thoughtful, and at times exciting work, it is sad to note many minor errors. TED MILES

Mr. Miles works aboard the Moshulu in Philadelphia, and is past assistant curator of the National Society. Passage East, by Carlton Mitchell (New York, W. W. Norton, reprint of 1953 ed., 248 pp., illus., $10.95). The return of this classic to print after an absence of some 20 years will be welcomed news to followers of the sea. More than the account of a small boat race from Bermuda to England, Passage East weaves the lore and learning of thousands of years of seafaring around a single gripping voyage. With the skill of a poet, Carlton Mitchell evokes the moods of the sea whether in storm, calm or exhileration of a fair wind on a clear day. Numerous photographs-some of superb qualitycapture the action of deep-sea racing, proving Mr. Mitchell an artist with his camera as well as with his pen. DOD