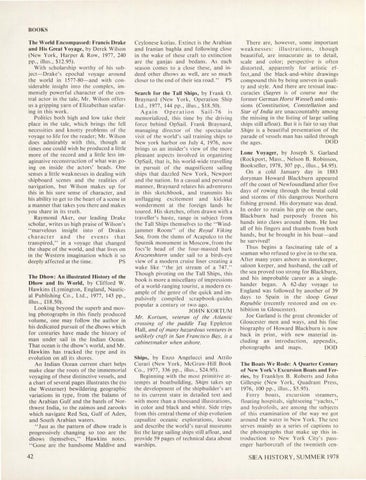 BOOKS The World Encompassed: Francis Drake and His Great Voyage, by Derek Wilson (New York, Harper & Row, 1977, 240 pp., illus., $12.95). With scholarship worthy of his subject-Drake's epochal voyage around the world in 1577-80-and with considerable insight into the complex, immensely powerful character of the central actor in the tale, Mr. Wilson offers us a gripping yarn of Elizabethan seafaring in this work. Politics both high and low take their place in the tale, which brings the fell necessities and knotty problems of the voyage to life for the reader; Mr. Wilson does admirably with this, though at times one could wish he produced a little more of the record and a little less imaginative reconstruction of what was going on inside the actors' heads. One senses a little weaknesses in dealing with shipboard scenes and the realities of navigation, but Wilson makes up for this in his sure sense of character, and his ability to get to the heart of a scene in a manner that takes you there and makes you share in its truth. Raymond Aker, our leading Drake scholar, writes us high praise of Wilson's "marvelous insight into of Drakes character and the events that transpired," in a voyage that changed the shape of the world, and that lives on in the Western imagination which it so PS deeply affected at the time. The Dhow: An illustrated History of the Dhow and Its World, by Clifford W. Hawkins (Lymington, England, Nautical Publishing Co., Ltd., 1977, 143 pp., illus., ÂŁ18.50). Looking beyond the superb and moving photographs in this finely produced volume, one may follow the author in his dedicated pursuit of the dhows which for centuries have made the history of man under sail in the Indian Ocean. That ocean is the dhow's world, and Mr. Hawkins has tracked the type and its evolution on all its shores. An Indian Ocean current chart helps make clear the roots of the immemorial voyaging of these distinctive vessels, and a chart of several pages illustrates the (to the Westerner) bewildering geographic variations in type, from the balams of the Arabian Gulf and the batels of Northwest India, to the zaimos and zarooks which navigate Red Sea, Gulf of Aden, and South Arabian waters. "Just as the pattern of dhow trade is progressively changing so too are the dhows themselves," Hawkins notes. "Gone are the handsome Maldive and

Ceylonese kotias. Extinct is the Arabian and Iranian baghla and following close in the wake of these craft to extinction are the ganjas and bedans. As each season comes to a close these, and indeed other dhows as well, are so much closer to the end of their sea road." PS Search for the Tall Ships, by Frank 0. Braynard (New York, Operation Ship Ltd., 1977, 144 pp., illus., $18.50). Again Operation Sail-76 is memorialized, this time by the driving force behind OpSail. Frank Braynard, managing director of the spectacular visit of the world's sail training ships to New york harbor on July 4, 1976, now brings us an insider's view of the more pleasant aspects involved in organizing OpSail, that is, his world-wide travelling in pursuit of the magnificent sailing ships that dazzled New York, Newport and the nation. In a casual and personal manner, Braynard relates his adventures in this sketchbook, and transmits his unflagging excitement and kid-like wonderment at the foreign lands he toured. His sketches, often drawn with a traveller's haste, range in subject from the Tall Ships themselves to the "Windjammer Room" of the Royal Viking Sea, from the slums of Acapulco to the Sputnik monument in Moscow, from the focs'le head of the four-masted bark Kruzenshtern under sail to a birds-eye view of a modern cruise liner creating a wake like "the jet stream of a 747." Though pivoting on the Tall Ships, this book is more a miscellany of impressions of a world-ranging tourist, a modern example of the genre of the quick and impulsively compiled scrapbook-guides popular a century or two ago. JOHN KORTUM

Mr. Kortum, veteran of the Atlantic crossing of the paddle Tug Eppleton Hall, and of many hazardous ventures in unlikely craft in San Francisco Bay, is a cabinetmaker when ashore. Ships, by Enzo Angelucci and Attilo Curari (New York, McGraw-Hill Book Co., 1977, 336 pp., illus., $24.95). Beginning with the most primitive attempts at boatbuilding, Ships takes up the development of the shipbuilder's art to its current state in detailed text and with more than a thousand illustrations, in color and black and white. Side trips from this central theme of ship evolution capsulize oceanic explorations, locate and describe the world's naval museums list the large sailing ships still afloat, and provide 59 pages of technical data about warships.

There are, however, some important weaknesses: illustrations, though beautiful, are innacurate as to detail, scale and color; perspective is often distorted, apparently for artistic effect,and the black-and-white drawings compound this by being uneven in quality and style. And there are textual inaccuracies (Sagres is of course not the former German Horst Wessel) and omissions (Constitution, Constellation and Star of India are unaccountably among the missing in the listing of large sailing ships still afloat). But it is fair to say that Ships is a beautiful presentation of the parade of vessels man has sailed through the ages. DOD Lone Voyager, by Joseph S. Garland (Rockport, Mass., Nelson B. Robinson, Bookseller, 1978, 307 pp., illus., $4.95). On a cold January day in 1883 doryman Howard Blackburn appeared off the coast of Newfoundland after five days of rowing through the brutal cold and storms of this dangerous Northern fishing ground. His dorymate was dead. In order to retain his grip on the oars, Blackburn had purposely frozen his hands into claws around them. He lost all of his fingers and thumbs from both hands, but he brought in his boat-and he survived! Thus begins a fascinating tale of a seaman who refused to give in to the sea. After many years ashore as storekeeper, saloon keeper, and husband, the call of the sea proved too strong for Blackburn, and his improbable career as a singlehander began. A 62-day voyage to England was followed by another of 39 days to Spain in the sloop Great Republic (recently restored and on exhibition in Gloucester). Joe Garland is the great chronicler of Gloucester men and ways, and his fine biography of Howard Blackburn is now back in print, with new material including an introduction, appendix, photographs and maps. DOD The Boats We Rode: A Quarter Century of New York's Excursion Boats and Ferries, by Franklyn B. Roberts and John Gillespie (New York, Quadrant Press, 1976, 100 pp., illus., $5.95). Ferry boats, excursion steamers, floating hospitals, sightseeing "yachts," and hydrofoils, are among the subjects of this examination of the way we got around the water in New York. The text serves mainly as a series of captions to the photographs that make up this introduction to New York City's passenger harborcraft of the twentieth cen-