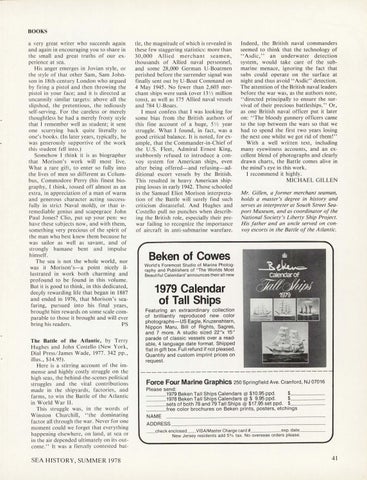 BOOKS a very great writer who succeeds again and again in enco uraging you to share in the sm a ll and great truths of our experience at sea . Hi s anger emerges in Jovian style , or the style of that o ther Sam, Sam Johnson in 18th-century London who argued by firin g a pistol and then throwing the pi stol in yo ur face; and it is directed at uncannily similar ta rge ts: above all the slipshod , the pretenti o us, th e tediously self-se rving. Fo r the careless or merel y thou ghtless he had a merely frost y style that I remember well as student ; it sent one sc urrying back quite literall y to one's book s. (In later yea rs, typicall y, he was generously supportive of the work this stud ent fell into.) Somehow 1 think it is as biographer that Mori so n's work will most live. What a rare gift , to enter so fully into the li ves of men so different as Columbus, Commod o re P erry (his finest biograp hy, I think , tossed off almost as a n extra, in ap preciation of a man of warm a nd ge nerous charac ter acting successfully in strict Nava l mold) , or that irremediable ge nius and scapegrace John Paul Jones? Clio, put up yo ur pen : we have th ese su bjects now, and with them, so mething very precious of the spirit of th e ma n who best knew them because he was sailor as well as savant, and of stro ngly humane bent a nd impulse himself. The sea is not the whole world, nor was it Moriso n's-a point nicely illustrated in work both charming and profound to be found in this volume. But it is good to think, in this dedicated, deeply rewarding life that began in 1887 a nd ended in 1976, that Morison's seafaring, pursued into his final years, broug ht him rewards on some scale comparable to those it brought and will ever bring hi s readers. PS The Battle of the Atlantic, by Terry Hughes and John Costello (New York, Di a l Press/James Wade, 1977. 342 pp., illus., $ 14.95 ). H ere is a st irring account of th e immense a nd highly costly st ruggl e on the hi gh seas, the behind-the-scenes politi ca l st ru ggles a nd the vital contributions made in the ship ya rd s, factories, a nd fa rms, to win the Battle of th e Atlantic in World War II. This struggle was, in th e word s of Winston C hurchill, " the dominatin g fac tor all through the war. Never for one moment could we forget that every thin g happening elsew here , on land, a t sea or in the air depended ultim a tely o n its ou tcome." It was a fiercely contested ba t-

tie, the magnitude of which is revealed in these few staggerin g statistics: more than 30,000 Allied merch ant sea men, thousands of Allied naval personnel, anp some 28,000 German U-Boatmen perished before the surrender signal was finally se nt out by U-Boat Command on 4 May 1945. No fewer th a n 2,603 merchant ships were sunk (over 13 Y2 million tons), as well as 175 Allied naval vessels and 784 U-Boats. I must confess that I was looking for so me bias from the British authors of this fine account of Âˇa huge, 5 Yi year st ruggle . What I found, in fact, was a good criti cal balance. It is noted, for example, that the Commander-in-Chief of th e U.S. Fleet, Admiral Ernest King, st ubbornly refused to introduce a convoy system for American ships, even a fter being offered-and refusing- addition a l escort vessels by the British. This resulted in heavy American shipping losses in early 1942. Those schooled in th e Samuel Eliot Morison interpretation of the Battle will surely find such criticism distasteful. And Hughes and Costello pull no punches when describing the British role, especially their prewar failing to recog ni ze th e importance of a ircraft in anti-submarine warefare.

Indeed, the British naval commanders seemed to think that the technology of '' Asdic,' ' an underwater detection system, would take care of the submarine menace, ignoring the fact that subs could operate on the surface at night and thus avoid "Asdic" detection . The attention of the British naval leaders before the wa r was, as the authors note, "directed principally to ensure the survival of their precious battleships." Or, as one British naval officer put it later on : "The bloody gunnery officers came to th e top between the wars so that we had to spend the first two yea rs losing the next one whilst we got rid of them!" With a well written text, including many eyewitness accounts, and an excellent blend of photographs and clearly drawn charts, the Ba ttle comes alive in the mind's eye in this work. I recommend it highly . MICHAEL GILLEN

Mr. Gillen, a former merchant seaman, holds a master 's degree in history and serves as interpreter at South Street Seaport Museum, and as coordinator of the National Society's Liberty Ship Project. His father and an uncle served on convoy escorts in the Battle of the A I/antic.