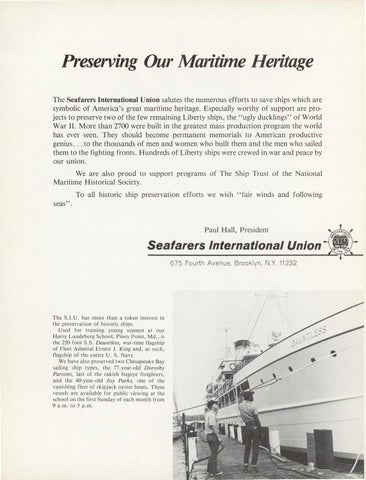 Preserving Our Marifime Heritage The Seafarers International Union salutes the numerous efforts to save ships which are symbolic of America's great maritime heritage. Especially worthy of support are projects to preserve two of the few remaining Liberty ships, the "ugly ducklings" of World War II. More than 2700 were built in the greatest mass production program the world has ever seen. They should become permanent memorials to American productive genius ... to the thousands of men and women who built them and the men who sailed them to the fighting fronts. Hundreds of Liberty ships were crewed in war and peace by our union. We are also proud to support programs of The Ship Trust of the National Maritime Historical Society. To all historic ship preservation efforts we wish "fair winds and following seas".

The S.l.U. has more than a token interest in the preservation of historic ships. Used for training young seamen at our Harry Lundeberg School, Piney Point, Md., is the 250 foot S.S. Dauntless, war-time flagship of Fleet Admiral Ernest J. King and, as such, flagship of the entire U .S. Navy. We have also preserved two C hesapeake Bay sailing ship types, the 77-year-old Dorothy Parsons, last of the rakish bugeye freighters, and the 40-year-old Joy Parks, one of the vanishing fleet of skipjack oyster boats. These vessels are available for public viewing at the school on the first Sunday of each month from 9 a.m. to 5 p.m.