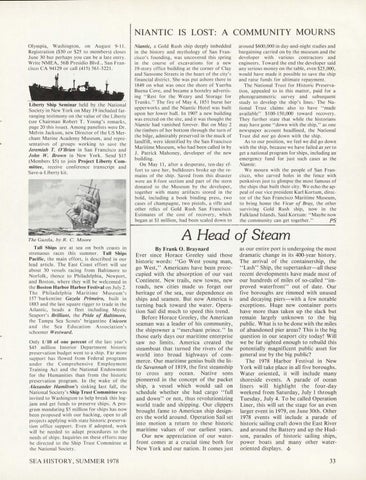 Niantic, a Gold Ru sh ship deeply imbedded in the hi story and m ythology of San Francisco&#39;s founding, was uncovered thi s sprin g in the course of excavations for a new 19-s tor y office building at the corner of Clay a nd Sansome Streets in the heart of the city&#39;s fin a ncial di st rict. She was put ashore th ere in 1849 on what was once the shore of Yuerba Buena Cove, and became a hostelr y advertisin g &quot;Res t for the Weary and Storage for Trunks.&quot; The fire of May 4, 1851 burnt her upperwork s and the Niantic Hotel was built upon her low er hull. In 1907 a new buildin g was erected on the site, and it was thought th e Niantic had vanished forever . But on Ma y 2 the timbers of her bottom through the turn of the bilge, admirably preserved in th e muck of landfill, were identified by the San Franci sco Maritime Mu seum, who had been called in by J. Patrick Mahoney, developer of th e new building. On May 11, after a d es perat e, ten-day effort to save her , bulldozers broke up the remain s of the ship. Saved from this di sas ter were an 8-foot section and part of the stern donated to the Museum by th e deve loper , together with man y artifacts stored in the hold , including a book bindin g press, two cases of champagne, two pistol s, a rifle a nd other relics of Gold Rush San Francisco. Estimates of th e cost of recovery, which bega n at $ I million , had been sca led dow n to

around $600,000 in day-a nd -ni ght studies and barga inin g ca rri ed on by the mu seu m and the develo per with various contractors and engin eers. Toward the end the developer said a ny seriou s mon ey on the table, even $25,000, wo uld have ma de it poss ibl e to save the ship and rai se funds for ultimate repay ment. The National Trust for H istoric Preservation, appealed to in thi s matter, paid for a photogra mmetri c survey and subsequent stud y to develop th e ship&#39; s lines.Âˇ The National Trust claims also to have &quot; made available&quot; $ I00-150,000 toward recovery. They further state that while the hi storians may have gone &quot;down with the ship,&quot; as one newspaper account headlined , the National Trust did not go down with the ship. As to our position, we feel we did go down with the ship , becau se we have failed as yet to get a na tional program for ships, including an emergency fund for just such cases as the

Niantic. We mourn with the people of San Francisco, who carved hol es in the fence with penkni ves just to glimpse the most famous of th e ships that built their city. We echo the appeal of our vice president Karl Kortum, director o f th e San Francisco Maritime Museum, to bring home the Vicar of Bray, the other survivin g Gold Ru sh ship, now in the Falkland Island s. Said Kortum: &quot;Maybe now the co mmunit y ca n get together. &quot; PS

By Frank 0. Braynard Ever since Horace Greeley said those historic words: &quot;Go West young man, go West,&quot; Americans have been preoccupied with the absorption of our vast Continent. New trails, new towns, new roads, new cities made us forget our heritage of the sea, our dependence on ships and seamen. But now America is turning back toward the water. Operation Sail did much to speed this trend. Before Horace Greeley, the American seaman was a leader of his comm1:mity, the shipowner a &quot;merchant prince .&quot; In those early days our maritime enterprise saw no limits . America created the steamboat that turned the rivers of the world into broad highways of commerce. Our maritime genius built the little Savannah of 1819, the first steamship Âˇto cross any ocean. Native sons pioneered in the concept of the packet ship, a vessel which would sail on schedule whether she had cargo &quot;full and down&quot; or not, thus revolutionizing world trade and shippin g. Our clippers brought. fame .to American ship designers the world around. Operation Sail set into motion a return to these historic maritime values of our earliest years. Our new appreciation of our waterfront comes at a crucial time both for New York and our nation. It comes just

as our entire port is undergoing the most dramatic change in its 400-year history. The arrival of the containership, the &quot;Lash&quot; Ship, the supertanker-all these recent developments have made most of our hundreds of miles of so-called &quot;improved waterfront&quot; out of date. Our five boroughs are rimmed with unused and decaying piers-with a few notable exceptions. Huge new container ports have more than taken up the slack but remain largely unknown to the big public. What is to be done with the miles of abandoned pier areas? This is the big question in our seaport city today! Will we be far sighted enough to rebuild this potentially magnificent public asset for general use by the big public? The 1978 Harbor Festival in New York will take place in all five boroughs. Water oriented, it will include many shoreside events. A parade of ocean liners will highlight the four-day weekend from Saturday, July I through Tuesday, July 4. To be called Operation Liner, this will set the stage for an even larger event in 1979, on June 30th . Other 1978 events will include a parade of historic sailing craft down the East River and around the Battery and up the Hudson, parades of historic sailing ships, power boats and many other wateroriented displays. .t