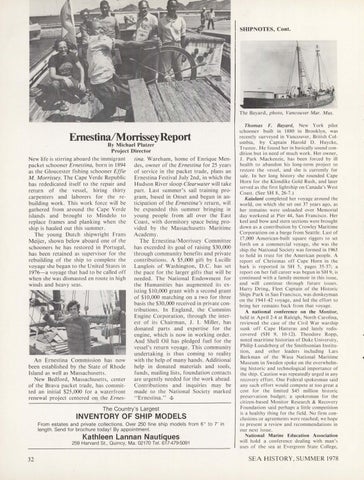 By Michael Platzer Project Director New life is stirring aboard the immigrant tina. Wareham, home of Enrique Menpacket schooner Ernestina, born in 1894 des, owner of the Ernestina for 25 years of service in the packet trade, plans an as the Gloucester fishing schooner Effie Ernestina Festival July 2nd, in which the M. Morrissey. The Cape Verde Republic has rededicated itself to the repair and Hudson River sloop Clearwater wi ll take return of the vessel, hiring thirty carpenters and laborers for the rebuilding work. This work force will be gathered from around the Cape Verde islands and brought to Mindelo to replace frames and planking when the sh ip is hauled out this summer. The young Dutch shipwright Frans Meijer, shown below aboard one of the schooners he has restored in Portugal, has been retained as supervisor for the rebuilding of the ship to complete the voyage she began to the United States in 1976-a voyage that had to be called off when she was dismasted en route in high winds and heavy seas.

An Ernestina Commission has now been established by the State of Rhode Island as well as Massachusetts . New Bedford, Massachusetts, center of the Brava packet trade, has committed an initial $25,000 for a waterfront renewal project centered on the Ernes-

part. Last summer's sail training program, based in Onset and begun in anticipation of the Ernestina 's return, will be expanded this summer bringing in young people from a ll over the East Coast, with dormitory space being provided by the Massachusetts Maritime Academy. The Ernestina/ Morrissey Committee has exceeded its goa l of raising $30,000 through community benefits and private contributions. A $5,000 gift by Lucille Langlois of Washington, D.C. has set the pace for the larger gifts that will be needed. The National Endowment for the Humanities has augmented its existing $10,000 grant with a second grant of $10,000 matching on a two for three basis the $30,000 received in private contributions. In Eng land, the Cummins Engine Corporation, through the interest of its Chairman, J. I. Miller, has donated parts and expertise for the engine, which is now in work in g order. And Shell Oil has pledged fue l for the vessel's return voyage. This community undertaking is thus coming to reality with the help of many hands. Additional help in donated materials and tools, funds, mailing lists, foundation contacts are urgently needed for the work ahead. Contributions and inquiries may be made to the National Society marked "Ernestina." .t

INVENTORY OF SHIP MODELS From esta tes and private collections. Over 250 fine ship models from 6" to 7' in length. Send for brochure today! By appointment.

Thomas F. Bayard, New York pilot schooner built in 1880 in Brooklyn, was recent ly su rveyed in Vancouver, British Columbia , by Captain Harold D. Huycke, Trustee. He found her in basical ly sound condition but in need of much work. Her owner, J. Park Mackenzie, has been forced by ill health to abandon hi s long-term project to restore the vessel, and she is currently for sale. In her long history she rounded Cape Horn for the Klondike Gold Rush , and later served as the first lightship on Canada's West Coast. (See SH 8, 26-7.) Kaiulani completed her voyage around the world, on which she set out 37 years ago, as her remains were unloaded over Memorial day weeke nd at Pier 44, San Francisco. Her keel and bow and stern sections were brought down as a contribution by Crow ley Maritime Corporation on a barge from Seattle. Last of 17,000 American-built square riggers to set forth on a commercial voyage, she was the ship the National Society was formed in 1963 to hold in trust for the American people. A report of Christmas off Cape Horn in the bark is reported in SH 5, pages 35-37; a report on her full career was begun in SH 9, is continued with a family memoir in thi s issue, and wi ll continue through future iss ues. Harry Dring, Fleet Captain of the Historic Ships Park in San Francisco, was donkeyman on the 1941 -42 voyage, and led the effort to bring her remain s back from that voyage. A national conference on the Monitor, held in Apr il 2-4 at Raleigh, North Carolina, reviewed th e case of the Civi l War warship sunk off Cape Hatteras and lately rediscovered (SH 9, 10-12). Theodore Ropp, noted maritime historian of Duke Un iversity, Philip Lundeberg of the Smithson ian Institution, and other leaders including Lars Barkman of the Wasa Nationa l Maritime Museum in Sweden spoke on the overwhelming hi storic and technological importance of the ship. Caution was repeatedly urged in any recovery effort. One Federal spokesman said any such effort would compete at too great a cost for the limited $45 million historic preservation budget; a spokesman for the citizen-based Monitor Research & Recovery Foundat ion sa id perhaps a little competition is a healthy thing for the field . No firm conclusions or agreements were reached; we hope to presen t a review and recommendations in our next issue. Nationa l Marine Education Association will hold a conference dealing with man's uses of the sea at Evergreen State Col lege,