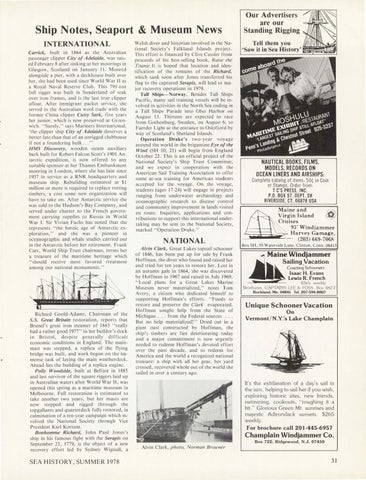 Ship Notes, Seaport &amp; Museum News INTERNATIONAL Carrick, built in 1864 as the Australian passenger clipper City of Adelaide, was raised February 8 after sinking at her moorings in Glasgow, Scotland on January I\. Moored alo ngsid e a pier, with a deckhouse bu ilt over her, she had been used since World War 11 as a Royal Naval Rese rve Club. Th is 791-ton full rigger was built in Sunderland of teak over iron frame s, and is the last true cl ipper afloat. After immi grant packet service, she served in the A ustra li an wool trade with the former C hin a clipper Cutty Sark, five years her junior, which is now preserved at Greenwich. &quot;Surely,&quot; says Mariners Int ernationa l, &#39;the clipper ship City of Adelaide deserves a better fate th an that of an unri gged clubhouse if not a foundering hulk. HMS Discovery, wooden steam aux iliary bark built for Robert Falcon Scott&#39;s 190 I Antarctic expedition, is now offered to any suitable spo nso r at her Thames Embankment mooring in London, where she has lain since 1937 in service as a RNR headquarters a nd museum sh ip . Rebuilding estimated at $ I million or more is required to replace rotting timbers, a cos t so me new organization will have to take on. After Antarctic service she was so ld to th e Hudson &#39;s Bay Compa n y, and served under charter to the Fre nch government carrying supplies to Russia in World War I. Sir Vivian Fuch s has noted that she represe nts &quot;the heroic age of Antarctic exploration,&quot; and s he was a pi oneer in oceanographic and whale st udi es carried out in the Anta rcti c before her retirement. Frank Carr, World S hip Trust chairman, terms her a treasure of th e maritime heritage which &quot;sho uld receive most favored treatment among our national m on uments.&quot;

Richard Goo ld -Adams, Chairman of the S.S. Great Britain restoration, reports that Brunel&#39;s great iron steamer of 1843 &quot; really had a rather good 1977&quot; in her builder&#39; s dock in Bri s tol , de s pite ge ne rall y difficult economic conditions in England . The mainmast was stepped, a replica of the fl ying bridge was built, and work begun on the immense task of lay ing th e main weatherdeck. Ahead li es th e building of a replica engine. Polly Woodside, built at Belfast in 1885 and las t survivor of the square riggers laid up in Australian waters after World War 11 , was opened this sp rin g as a maritime museum in Melbourne. Full restoration is est im ated to take anot her two years, but her mas ts a re now stepped a nd rigged through the topga ll a nt s and quarterdeck fully res to red, in culmin a ti on of a ten-year campaign whic h involved the National Society through Vice Presid ent Karl Kortum. Bonhomme Richard, John Paul Jones&#39; s ship in his famous fi ght with the Serapis o n September 23, 1779, is the object of a new recovery effort led by Sydney Wignall, a

Welsh di ver and hi storian involved in th e National Society&#39;s Falkland Island s project. Thi s effort is financed by C li ve Cuss ler from proceeds of his best-selling book, Raise the Titanic. It is hoped that locat ion and identification of the remains of the Richard, which sa nk soo n after Jones transferred hi s flag to the captured Serapis, will lead to major recovery operations in 1979. Tall Ships-Norway. Besides Tall Ships Pacific, many sa il training vessels wi ll be involved in activities in th e North Sea end in g in a Tall Ships Parade into Olso Harbor on August 15. Thirteen are expected to race from Gothenburg, Sweden, on Augu st 6, to Faerder Light at the entrance to Oslofjord by way of Scotland&#39;s Shetland Islands. Operation Drake&#39;s t wo-year voyage around the world in the bri gant ine Eye of the Wind (SH 10, 21) will begin from Eng land October 22. This is a n official project of the National Society&#39;s Ship Trust Commi ttee , and we expec t in cooperat ion with the American Sa il Training Association to offer so me at-sea training for American stude nts accepted for the voyage. On the voyage, students (ages 17-24) will engage in projects ranging from underwater archaeology and oceanographic research to disease co ntrol a nd community improvement in lands visited en route. Inquiri es, applications and contributions to support thi s international undertaking may be sent to the National Society, marked &quot;Operat ion Drake .&quot;

NATIONAL Alvin Clark, Great Lakes topsa il schoon er of 1846, has been put up for sale by Frank Hoffman, the diver who found and raised her and tried for ten yea rs to restore her . Los t in a n a utumn ga le in 1864, she was discovered by Hoffm a n in 1967 and ra ised in Jul y 1969. &quot;Local plans for a Great Lakes Marine Museum never materialized,&quot; notes Tom Avery, a citi zen who dedicated himself to s upporting Hoffman&#39;s effort s. &quot;F und s to restore and preserve th e Clark eva porated . Hoffman so ught help from the State of Michigan .. . from the Federal sources ... But no help materialized!&quot; Dried o ut in a giant oast co nstru cted by Hoffma n, the ship &#39;s timbers are fast deteriorating today and a major co mmitm ent is now urge ntl y needed to redeem Hoffman&#39; s devoted effort over the past decade, a nd to redeem for America and the world a recognized national treasure: a s hip with a ll her gear, her yard crossed, recovered whole out of the world she sa iled in over a century ago .