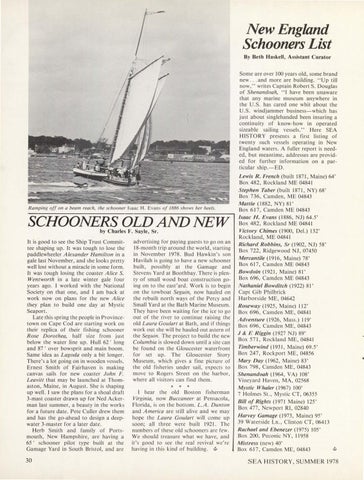 New England Schooners List By Beth Haskell, Assistant Curator Some are over 100 years old, some brand new ... and more are building. &quot;Up till now,&quot; writes Captain Robert S. Douglas of Shenandoah, &quot;1 have been unaware that any marine museum anywhere in the U.S. has cared one whit about the U.S. windjammer business-which has just about singlehanded been insuring a continuity of know-how in operated sizeab le sailing vessels.&quot; Here SEA HISTORY presents a first listing of twenty such vessels operating in New England waters. A fuller report is needed, but meantime, addresses are provided for further information on a particular s hip.- ED.

It is good to see the Ship Trust Committee shaping up. It was tough to lose the paddlewheeler Alexander Hamilton in a gale last November, and she looks pretty well lost without a miracle in some form. It was tough losing the coaster Alice S. Wentworth in a late winter gale four years ago. I worked with the National Society on that one, and I am back at work now on plans for the new Alice they plan to build one day at Mystic Seaport. Late this spring the people in Provincetown on Cape Cod are starting work on their replica of their fishing schooner Rose Dorothea, half size from just below the water line up . Hull 62&#39; long and 87&#39; over bowsprit and main boom. Same idea as Lagoda only a bit longer. There&#39;s a lot going on in wooden vessels. Ernest Smith of Fairhaven is making canvas sai ls for new coaster John F. Leavitt that may be launched at Thomaston, Maine, in August. She is shaping up well. I saw the plans for a shoal draft 3-mast coaster drawn up for Ned Ackerman last su mmer, a beauty in the works for a future date. Pete Cu ller drew them and has the go-ahead to design a deepwater 3-master for a later date. Herb Smith and family of Portsmouth, New Hampshire, are having a 65 &#39; schoon er pilot type built at the Gamage Yard in South Bristol, and are

advertising for paying guests to go on an 18-month trip around the world, starting in November 1978. Bud Hawkin&#39;s son Havilah is going to have a new schooner built, possibly at the Gamage and Stevens Yard at Boothbay. There is plenty of small wood boat construction going on to the east&#39;ard. Work is to begin on the towboat Seguin, now hauled on the rebuilt north ways of the Percy and Small Yard at th e Bath Marine Museum. They have been waiting for the ice to go out of the river to continue raising the old Laura Goulart at Bath, and if things work out she will be hauled out astern of the Seguin. The project to build the new Columbia is slowed down until a site can be found on the Gloucester waterfront for set up. The Gloucester Story Museum, which gives a fine picture of the old fisheries under sail, expects to move to Rogers Street on the harbor, where all visitors can find them.

1 hear the o ld Boston fisherman Virginia, now Buccaneer at Pensacola, Florida, is on the bottom. L.A. Dunton and America are st ill alive and we may hope the Laura Goulart will come up soon; all three were built 1921. The numbers of these old schooners are few. We should treasure what we have, and it&#39;s good to see the real revival we&#39;re having in this kind of building. w