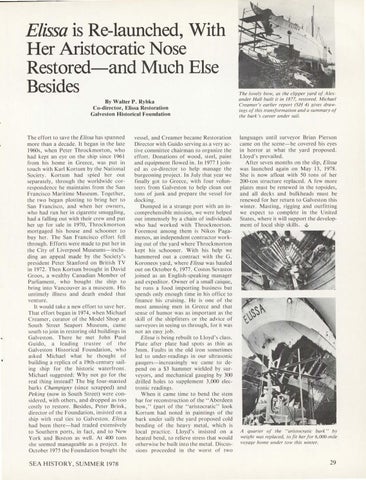 Elissa is Re-launched, With Her Aristocratic Nose Restored-and Much Else Besides By Walter P. Rybka Co-director, Elissa Restoration Galveston Historical Foundation

The effort to save the Elissa has spanned more than a decade. It began in the late 1960s, when Peter Throckmorton, who had kept an eye on the ship since 1961 from his home in Greece, was put in touch with Karl Kortum by the National Society. Kortum had sp ied her out separat ely, through the worldwide correspo ndence he maintains from the San Francisco Maritime Mu se um . Together, the two began plotting to bring her to San Francisco, and when her owners, who had run her in cigarette smugglin g, had a falling out with their crew and put her up for sa le in 1970, Throckmorton mortgaged his house and schooner to buy her. The San Francisco effort fell through. Efforts were made to put her in the City of Liverpool Museums-inclu ding an appeal made by the Society's president Peter Stanford on British TV in 1972. Then Kortum brought in David Groos, a wealthy Canadian Member of Parliament, who bought the ship to bring into Vancouver as a muse um. Hi s untimely illness and death ended that venture. It would take a new effort to save her. That effort bega n in 1974, when Michael Creamer, curator of the Model Shop at South Street Seaport Mu se um, came so uth to join in restorin g old build ings in Galveston. There he met John Paul Guido, a leading trustee of the Galveston Historical Foundation, who asked Michael what he thought of building a replica of a 19th-century sailing ship for the historic waterfront . Michael suggested: Why not go for the real thing instead? The big four-ma sted barks Champigny (since scrapped) and Peking (now in South Street) were considered, with others, and dropped as too costly to restore. Besides, Peter Brink, director of the Foundation, insisted on a ship with real ties to Galveston. Elissa had bee n there-had traded extensively to Southern ports, in fact, and to New York and Boston as well. At 400 ton s she seemed manageable as a project. In October 1975 the Foundation bought the

vessel, and Creamer became Restoration Director with Guido serving as a very active comm it tee chairman to organize the effort. Donations of wood, steel, paint and equipment flowed in. In 1977 I joined as co-director to help manage the burgeoning project. In July that year we finally got to Greece, with four volunteers from Galveston to help clean out tons of junk and prepare the vessel for docking. Dumped in a stran ge port with an incomprehensible mission, we were helped out immensely by a chain of individuals who had worked with Throckmorton. Foremost among them is Nikos Pagamenos, an independent contractor working out of the yard where Throckmorton kept his schooner. With his help we hammered out a contract with the G. Koroneos yard, where Elissa was hauled out on October 6, 1977. Costos Sevastos joined as an Engli sh-s peaking manager and expeditor. Owner of a small caique, he run s a food importing business but spends only enough time in his office to fin a nce hi s cruising. He is one of the most amusing men in Greece and that se nse of humor was as important as the sk ill of the shipfitters or the advice of surveyors in seeing us through, for it was not an easy job. Elissa is being rebuilt to Lloyd 's class. Pla te after plate had spot s as thin as 3mm. Faults in the old iron so metimes led to under-readings in our ultraso nic gaugers- in creasingly we came to depend on a $3 hammer wielded by surveyors, and mechanical gauging by 300 drilled holes to supplement 3,000 electronic readings. When it came time to bend the stem bar for reconstruction of the "Aberdeen bow," (part of the "aristocratic" look Kortum had noted in paintings of the bark under sa il) the yard proposed cold bending of the heavy metal, which is local practice. Lloyd' s insisted on a heated bend, to relieve stress that would otherwise be built into the metal. Discussio ns proceeded in the worst of two

The lovely bow, as 1he clipper yard of Alexander Hall buill ii in 1877, reslored. Michael Creamer's earlier repor/ (SH 4) gives drawings of !his lransformalion and a summary of !he bark's career under sail.

languages unt ii surveyor Brian Pierson came on the sce ne-he covered his eyes in horror at what the yard proposed. Lloyd's prevailed. After seven months on the slip, Elissa was launched again on May 13, 1978. She is now afloat with 50 tons of her 200-ton structure replaced. A few more plates must be renewed in the topsides, and all deck s and bulkheads must be renewed for her return to Galveston this winter. Masting, riggin g and outfitting we expect to complete in th e United States, where it will support the development of local ship skills. .t

A quaner of !he "aristocratic bark" by weigh! was replaced, to fit her for 6, 000-mile voyage home under tow this winter.