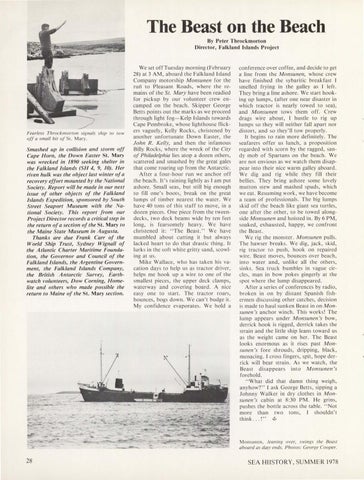 The Beast on the Beach By Peter Throckmorton Director, Falkland Islands Project

Fearless Throckmorton signals ship to tow off a small bit of St. Mary.

Smashed up in collision and storm off Cape Horn, the Down Easter St. Mary was wrecked in 1890 seeking shelter in the Falkland Islands (SH 4, 9, JO). Her riven hulk was the object last winter of a recovery effort mounted by the National Society. Report will be made in our next issue of other objects of the Falkland Islands Expedition, sponsored by South Street Seaport Museum with the National Society. This report from our Project Director records a critical step in the return of a section of the St. Mary to the Maine State Museum in Augusta. Thanks are due Frank Carr of the World Ship Trust, Sydney Wignall of the Atlantic Charter Maritime Foundation, the Governor and Council of the Falkland Islands, the Argentine Government, the Falkland Islands Company, the British Antarctic Survey, Earthwatch volunteers, Dow Corning, Homelite and others who made possible the return to Maine of the St. Mary section.

We set off Tuesday mornin g (February 28) at 3 AM, aboard the Falkland Isla nd Company motorship Monsunen for the run to Pleasant Roads, where the remains of the St. Mary have been readied for pickup by o ur vo lunteer crew encamped on the beach. Skipper George Betts points out the mark s as we proceed through light fog-Kelp Islands towa rds Cape Pembrok e, whose lighthouse flickers vag uel y, Kelly Rocks, christened by another unfortunate Down Easter, the John R. Kelly, a nd then the infamous Billy Rocks, where the wreck of the City of Philadelphia lies atop a doze n others, scattered and smas hed by th e great gales that come roaring up from th e Antarctic. After a four-hour run we a nchor off the beach. It 's raining lightl y as I a m put as hore. Small seas, but still big enough to fill one's boots, break on th e great lumps of timber nea rest th e water. We have 40 tons of this stuff to move, in a doze n pieces. One piece from the tweendeck s, two deck beams wide by ten feet long, is fearsomely heavy. We have christened it: " Th e Beast. " We have mumbled abou t cu tting it but always lacked heart to do that dras ti c thin g. It lurks in the soft white gritt y sa nd , scowling at us. Mike Wallace, who has taken his vacation da ys to help us as tractor driver, helps me hook up a wire to one of the smallest pieces, the upper deck clamps, waterway a nd coverin g board. A nice easy one to start. The trac to r roars, bounces, bogs down. We can't budge it. My confidence evaporates. We hold a

conference over coffee, and decide to get a line from the Monsunen, whose crew have fini shed the sy baritic break fast I smelled frying in the galley as I left. They bring a line ashore. We start hooking up lumps, (after one near disaster in which tractor is nearl y towed to ea), and Monsunen tows them off. C rew drags wire about, I hustle to ri g up lumps so they will neither fall apart nor distort, an d so they'll tow properly. It begins to rain more definitely. The seafarers offer us lunch, a proposi tion regarded with sco rn by the ragged, sandy mob of Spartans on the beac h. We are not envious as we watch th em disappear into their nice warm galley aboard . We dig a nd ri g while they fill their bellies. The y bring as hore some love ly mutton stew and mashed spuds, which we eat. Resuming work, we have become a team of professionals. The big lumps sk id off the beach like gia nt sea turtles, one after the other, to be towed alongside Monsunen and hoisted in. By 6 PM, soa ked, exhausted, happy-, we confront the Beast. We ri g the mon ster. Monsunen pulls. The hawser break s. We dig, jack, sk id, rig tractor to push, hook on repaired wire. Beast mo ves, bounces over beac h, int o water and, unlike all th e others, sink s. Sea truck bumbles in vague circles, man in bow pokes gingerl y a t the spot whe re the lump disappeared. After a series of conferences by radio, broken in on by distant Spanish fishermen discussing other catches, decision is made to haul sunken Beast in on Monsunen 's anchor winch. This works! The lump appears und er Monsunen's bow , derrick hook is rigged, derrick takes the strain a nd the little ship leans toward us as the weight came on her. The Beast look s enormous as it ri ses past Monsunen 's fore shrouds, dripping, black, menacing. I cross fin gers, spit, hope derrick will bear stra in. As we watch, the Beast disappears into Monsunen 's forehold. "W hat did that damn thing weigh, anyhow?" I as k George Betts, sipping a Johnny Walker in dry clothes in Monsunen's ca bin at 8:30 PM. He grins, pushes the bottle across the table. "Not more than tw o tons, I shouldn ' t think . . . ! " .V

Monsunen, ,leaning over, swings the Beast aboard as dmy ends. Photos: George Cooper.