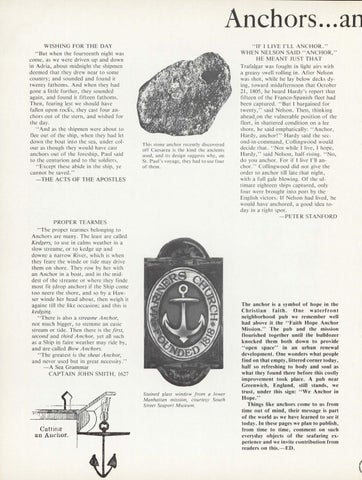 Anchors ... an WISHING FOR THE DAY "But when the fourteenth night was come , as we were driven up and down in Adr ia, about midnight the shipm en deemed that they drew near to so me country ; and sounded and found it twenty fathom s. And when they ha d gone a little further, they sounded again , a nd found it fifteen fathom s. Then , fearing lest we should have fa llen upon rocl< s, they cast four anchors out of th e stern, and wished for the day . "And as the shipmen were about to fl ee out of the ship, when they had let down the boat into the sea , under colour as though they would ha ve cast anchors out of the fore ship, Paul sa id to the centurion and lo the soldi ers, "Except these abide in the ship, ye cannot be saved." - THE ACTS OF THE APOSTLES

PROPER TEARMES "The proper tearmes belon gin g to Anchors are man y. The least a re ca lled Kedgers, to u se in calms weather in a slow streame, or to kedge up and downe a narrow River, which is when they feare the winde or tid e may drive them on shore. They row by her with an Anchor in a boat, and in th e middest of the streame or where th ey find e most fit (drop anchor) if the Ship come too neere the shore, and so by a Hawser winde her head about, then weigh it againe till th e like occasion; a nd thi s is

kedging. "There is a lso a s/reame Anchor, not much bigger, to stemm e an easie stream or tide . Then th ere is th e jlrst, second and third Anchor, yet a ll such as a Ship in faire wea th er may ride by, and are called Bow Anchors. "The greatest is th e sheaf Anchor, and never used but in great necess it y." -A Sea Grammar CAPTAIN J.O HN S MITH , 1627

" IF I LIVE I'LL ANCHOR." WHEN NELSON SAID "ANCHOR," HE MEANT JUST THAT Trafalgar was fought in light airs with a greasy swell rollin g in. Aft er Nelso n was shot, while he lay below deck s dying, toward midafternoon that October 21, 1805, he hea rd Hardy' s report that fifteen of th e Franco-Spanish fleet ha d been captured. "But I ba rga ined for twent y," said Nelso n. Then, thinkin g ahead ,o n the vulnerable position of th e fleet , in shatt ered condition on a lee shore, he said emphatica ll y: "A nchor, Hard y, anchor! " Hardy sa id the second-in-command, Co llingwood would decide that. "Not while I li ve-, I hope, Hard y," said Nelso n, half-ri sin g. "No, do yo u anchor. For if I live I'll anchor. " Co llingwood did not give the order to anchor till lat e that nig ht , with a full ga le blowing. Of the ultimat e eighteen ships ca ptured , only four were brought into port by th e E nglish victors. If Nelson had lived , he would have a nchored, a good idea today in a ti ght spo t. - P ET E R STANFORD

The anchor is a symbol of hope in the Christian faith. One waterfront neighborhood pub we remember well had above it the "Faith Hope Anchor Mission." The pub and the mission flourished together until the bulldozer knocked them both down to provide "open space" in an urban renewal development. One wonders what people find on that empty, littered corner today, half so refreshing to body and soul as what they found there before this costly improvement took place. A pub near Greenwich, England, still stands, we trust, under this sign: "We Anchor in Hope. " Things like anchors come to us from time out of mind, their message is part of the world as we have learned to see it today. In these pages we plan to publish, from time to time, comment on such everyday objects of the seafaring experience and we invite contribution from readers on this.-ED.