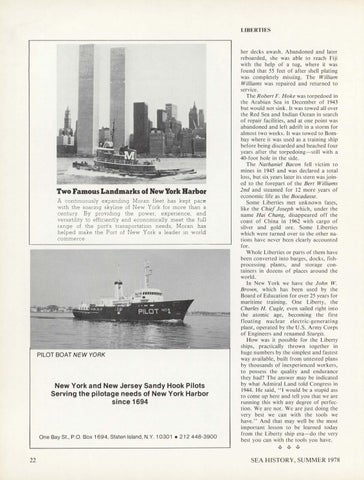 her decks awash. Abandoned and later reboarded, she was ab le to reach Fiji with the help of a tug, where it was found that 55 feet of after shell plating was completely missing. The William Williams was repaired and returned to service. The Robert F. Hoke was torpedoed in the Arabian Sea in December of 1943 but wou ld not sink. It was towed all over the Red Sea and Indian Ocean in search of repair facilities, and at one point was abandoned and left adrift in a storm for almost two weeks. It was towed to Bombay where it was used as a training ship before being discarded and beached four years after the torpedoing-still with a 40-foot hole in the side. The Nathaniel Bacon fe ll victim to mines in 1945 and was declared a total loss , but six years later its stern was joined to the forepart of the Bert Williams 2nd and steamed for 12 more years of economic life as the Bocadasse. Some Liberties met unknown fates, like the Chief Joseph which, under the name Hai Chang, disappeared off the coast of China in 1962 with cargo of silver and go ld ore. Some Liberties which were turned over to the other nations have never been clearly accounted for. Whole Liberties or part s of them have been converted into barges, docks, fishprocessing plants, and storage containers in dozens of places around the wor ld . In New York we have the John W. Brown, which has been used by the Board of Edueation for over 25 years for maritime training. One Liberty, the Charles H. Cug/e, even sailed right into the atom ic age, becoming the first floating nuclear elec tri c-generating plant, operated by the U.S. Army Corps of Engineers and renamed Sturgis. How was it possible for the Liberty ships, practically thrown together in huge numbers by the simplest and fastest way ava ilab le, built from unt es ted plans by thousands of inexperienced workers, to possess the quality and endurance they had? The answer may be indi cated by what Admira l Land told Congress in 1944. He said, "I would be a stupid ass to come up here and te ll you that we are running this with any degree of perfection. We are not. We are just doing the very best we can with the too ls we have . " And that may well be the most important lesson to be learned today from the Liberty ship era- do the very best you can with the tools you have.