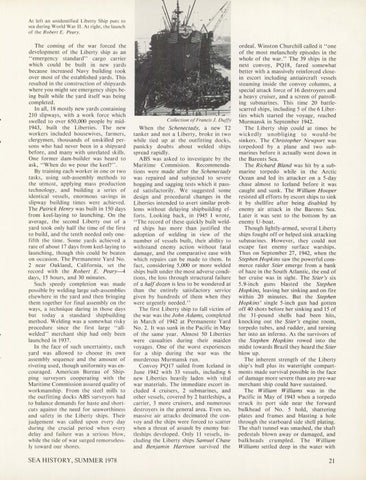 At left an unidentified Liberty Ship put s to sea during World War II. At ri g ht, the launch of the Robert ÂŁ. Peary .

The coming of the war forced the development of the Liberty ship as an "emergency standard" cargo carrier which could be built in new yards because increased Navy building took over most of the established yards. This resulted in the construction of shipyards where you might see emergency ships being built while the yard itself was being completed. In all, 18 mostly new yards containing 210 slipways, with a work force which swelled to over 650,000 people by mid1943, built the Liberties. The new workers included housewives, farmers, clergymen, thousands of unskilled persons who had never been in a shipyard before, and many with unrelated skills. One former dam-builder was heard to ask, "When do we pour the keel?". By training each worker in one or two tasks, using sub-assembly methods to the utmost, applying mass production technology, and building a series of identical vessels, enormous savings in slipway building times were achieved . The Patrick Henry was built in I SO days from keel-laying to launching. On the average, the second Liberty out of a yard took only half the time of the first to build, and the tenth needed only onefifth the time . Some yards achieved a rate of about 17 days from keel-laying to launching, though this could be beaten on occasion . The Permanente Yard No . 2 near Oakland, California, set the record with the Robert E. Peary-4 days, 15 hours, and 30 minutes. Such speedy completion was made possible by welding large sub-assemblies elsewhere in the yard and then bringing them together for final assembly on the ways, a technique daring in those days but today a standard shipbuilding method. Welding was a somewhat risky procedure since the first large "allwelded " merchant ship had only been launched in 1937 . In the face of such uncertainty, each yard was allowed to choose its own assembly sequence and the amount of riveting used, though uniformity was encouraged . American Bureau of Shipping surveyors cooperating with the Maritime Commission assured quality of workmanship. From the steel mills to the outfitting docks ABS surveyors had to balance demands for haste and shortcuts against the need for seaworthiness and safety in the Liberty ships. Their judgement was called upon every day during the crucial period when every delay and failure was a serious blow, while the tide of war surged remorselessly toward our shores.

When the Schenectady, a new T2 tanker and not a Liberty, broke in two while tied up at the outfitting docks, panicky doubts about welded ships spread rapidly. ABS was asked to investigate by the Maritime Commision. Recommendations were made after the Schenectady was repaired and subjected to severe hogging and sagging tests which it passed satisfactorily. We suggested some design and procedural changes in the Liberties intended to avert similar problems without delaying shipbuilding efforts. Looking back, in 1945 I wrote, "The record of these quickly built welded ships has more than justified the adoption of welding in view of the number of vessels built, their ability to withstand enemy action without fatal damage, and the comparative ease with which repairs can be made to them . In fact, considering 5,000 or more welded ships built under the most adverse conditions, the loss through structural failure of a half dozen is less to be wondered at than the entirely satisfactory service given by hundreds of them when they were urgently needed ." The first Liberty ship to fall victim of the war was the John Adams, completed in March of 1942 at Permanente Yard No. 2. It was sunk in the Pacific in May of the same year. Almost 50 Liberties were casualties during their maiden voyages . One of the worst experiences for a ship during the war was the murderous Murmansk run. Convoy PQ 17 sailed from Iceland in .June 1942 with 33 vessels, including 6 new Liberties heavily laden with vital war materials . The immediate escort included 4 cruisers, 2 submarines, and other vessels, covered by 2 battleships, a carrier, 3 more cruisers, and numerous destroyers in the general area . Even so, massive "air attacks decimated the convoy and the ships were forced to scatter when a threat of assault by enemy battleships developed. Only I I vessels, including the Liberty ships Samuel Chase and Benjamin Harrison survived the

ordeal. Winston Churchill called it "one of the most melancholy episodes in the whole of the war." The 39 ships in the next convoy, PQIS, fared somewhat better with a massively reinforced closein escort including antiaircraft vessels steaming inside the convoy columns, a special attack force of 16 destroyers and a heavy cruiser, and a screen of patrolling submarines. This time 20 battlescarred ships, including 5 of the 6 Liberties which started the voyage, reached Murmansk in September 1942. The Liberty ship could at times be wickedly unobliging to would-be sinkers. The Christopher Newport was torpedoed by a plane and two submarines before it actually went down in the Barents Sea. The Richard Bland was hit by a submarine torpedo while in the Arctic Ocean and led its attacker on a 5-day chase almost to Iceland before it was caught and sunk. The William Hooper resisted all efforts by escort ships to sink it by shellfire after being disabled by enemy air attack in the Barents Sea. Later it was sent to the bottom by an enemy U-boat. Though lightly-armed, several Liberty ships fought off or helped sink attacking submarines. However, they could not escape fast enemy surface warships. Thus on September 27, 1942, when the Stephen Hopkins saw the powerful commerce raider Stier emerge from a bank of haze in the South Atlantic, the end of her cruise was in sight. The Stier's six 5.9-inch guns blasted the Stephen Hopkins, leaving her sinking and on fire within 20 minutes. But the Stephen Hopkins' single 5-inch gun had gotten off 40 shots before her sinking and 15 of the 31-pound shells had been hits, knocking out the Stier's engine room, torpedo tubes, and rudder, and turning her into an inferno. As the survivors of the Stephen Hopkins rowed into the midst towards Brazil they heard the Stier blow up. The inherent strength of the Liberty ship's hull plus its watertight compartments made survival possible in the face of damage more severe than any pre-war merchant ship could have sustained. The William Williams was in the Pacific in May of 1943 when a torpedo struck its port side near the forward bulkhead of No. 5 hold, shattering plates and frames and blasting a hole through the starboard side shell plating. The shaft tunnel was smashed, the shaft pedestals blown away or damaged, and bulkheads crumpled . The William Williams settled deep in the water with