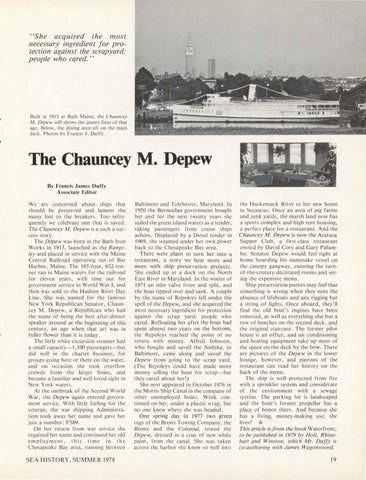 &quot;She acquired the most necessary ingredient for protection against the scrapyard: people who cared. &quot;

Built in 1913 al Bath Maine, the Chauncey M. Depew still shows the jaunty lin es of that age. Below, the dining area aft on the main deck. Photos by Francis J. Duffy.

The Chauncey M. Depew By Francis James Duffy Associate Editor We are concerned about sh ips that should be prese rved and lament the many lost to the breakers. Too infrequently we celebrate one that is saved. The Chauncey M. Depew is a such a success story . The Depew was born in the Bath Iron Works in 1913, launched as the Rangeley and placed in se rvice with the Maine Central Railroad operating out of Bar Harbor, Maine. The 185-foot, 652-tonner ran in Maine waters for the railroad for eleven years, with time out for government service in World War I, and then was so ld to the Hudson River Day Line. She was named for the famous New York Republican Senator, Chauncey M. Depew, a Republican who had the name of being the best after-dinner speaker around at the beginning of this century, an age when that art was in fuller flower than it is today. The little white excursion steamer had a sma ll capacity- I, 100 passengers-but did well in the charter business, for gro ups go ing here or th ere on the water, and on occasion she took overflow crowds from the larger boats, a nd became a familiar and well loved sight in New York waters. At the outbreak of the Second World War, the Depew again entered government se rvice . With little feeling for the veteran, the war shippin g Administration took away her name and gave her just a number: FS89. On her return from war service she rega ined her nam e a nd continued her old e mployment, thi s time in the Chesapeake Bay area, runnin g bet ween

Baltimore and Tolchester, Maryland. In 1950 the Bermudan gove rnment bought her and for the next twenty years she sa iled the green island waters as a tender, taking passe ngers from cruise ships ashore. Displaced by a Diesel tender in 1969, she steamed under her own power back to the Chesapeake Bay area. There were plans to turn her into a restaurant, a story we hear more and more with ship preservation projects. She ended up at a dock on the North East River in Maryland. In the winter of 1971 an inlet valve froze and split , and the boat tipped over and sa nk . A couple by the name of Repoleys fell under the spell of the Depew, and she acquired the most necessary ingredient for protection against the scra p yard: people who cared. Refloating her after the boat had spent almost two years on the bottom, the Repoleys reached the point of no return with money. Alfred Johnson, who bought and saved the Nobska, in Baltimore, came along and saved the Depew from going to the sc rap yard. (The Repoleys could have made more money selling the boat for sc rap-but they cared about her!) She next appeared in October I 976 in the Morris Ship Canal in the company of other unemployed boats. Work continued on her, under a plastic wrap, but no one knew where she was headed. One spring day in I 977 two green tu gs of the Bronx Towing Company, the Bronx and the Colonial, towed the Depew, dressed in a coat of new white paint, from the canal. She was taken across the harbor she knew so well into

the Hackensac k River to her new home in Secaucus. Once an area of pig farms and junk yards, the marsh land now has a sport s complex and high rent housing, a perfect place for a restaurant. And the Chauncey M. Depew is now the Aratusa Supper Club, a first-class restaurant owned by David Cory and Gary Palumbo. Senator Depew would feel right at home boarding hi s namesake vessel on the canopy gangway, entering the turnof-the-century decorated rooms and seeing the expensive menu. Ship prese rvation purists may feel that something is wrong when they note the absence of lifeboats and any rigging but a string of lights. Once aboard, they&#39;ll find the old boat &#39;s engines have been removed, as well as everything else but a row of benches on the second deck, and the original staircase. The former pilot house is an office, and air conditioning and heating equipment take up most of the space on the deck by the bow . There are pictures of the Depew in the lower lounge, however, and patrons of the restaurant can read her history on the back of the menu. The ship is well protected from fire with a sprinkler system and considerate of the environment with a sewage system. The parking lot is landscaped and the boat&#39;s former propeller has a place of honor there. And because she has a living, money-making use, she lives! w This article is from the book Waterfront,

to be published in 1979 by Holt, Rhinehart and Winston, which Mr. Duffy is co-authoring with James Wagonvoord.