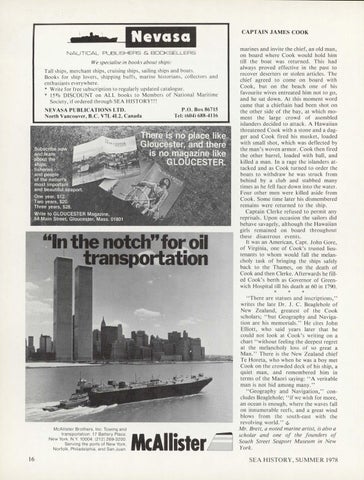 ''In1 the notch'' for oil transportation

marines and invite the chief, an old man, on board where Cook would hold him till the boat was returned. This had always proved effective in the past to recover deserters or stolen articles. The chief agreed to come on board with Cook, but on the beach one of his favourite wives entreated him not to go, and he sat down . At this moment word came that a chieftain had been shot on the other side of the bay , at which moment the large crowd of asembled islanders decided to attack. A Hawaiian threatened Cook with a stone and a dagger and Cook fired his musket, loaded with small shot, which was deflected by the man's woven armor. Cook then fired the other barrel, loaded with ball, and killed a man . In a rage the islanders attacked and as Cook turned to order the boats to withdraw he was struck from behind by a club and sta bbed many times as he fell face down into the water. Four other men were killed aside from Cook. Some time later his dismembered remains were returned to the ship. Captain Clerke refused to permit any reprisals . Upon occasion the sailors did behave savagely, although the Hawaiian girls remained on board throughout these disastrous events. It was an American, Capt. John Gore, of Virginia, one of Cook's trusted lieutenants to whom would fall the melancholy task of bringing the ships safely back to th e Thames, on the death of Cook and then C lerke. Afterwards he filled Cook's berth as Governor of Greenwich Hospital till his death at 60 in 1790.

"There are statues and inscriptions," writes the late Dr. J. C. Beaglehole of New Zealand, greatest of the Cook scholars; "but Geography and Navigation are his memorials." He cites John Elliott, who said years later that he could not look at Cook's writing on a chart "without feeling the deepest regret at the melancholy loss of so great a Man." Ther.e is the New Zealand chief Te Horeta, who when he was a boy met Cook on the crowded deck of his ship, a quiet man, and remembered him in terms of the Maori saying: "A veritable man is not hid among many." "Geography and Navigation," concludes Beaglehole; "if we wish for more, an ocean is enough, where the waves fall on innumerable reefs, and a great wind blows from the south-east with the revolving world ." .t

Mr. Brett, a noted marine artist, is also a scholar and one of the founders of South Street Seaport Museum in New York.