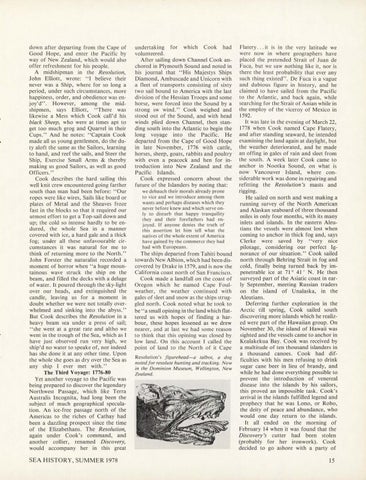 down after departing from the Cape of Good Hope, and enter the Pacific by way of New Zealand, which would also offer refreshment for his people. A midshipman in the Resolution, John Elliott, wrote: "I believe their never was a Ship, where for so long a period, under such circumstances, more happiness, order, and obedience was enjoy'd''. However, among the midshipmen, says Elliott, "There was likewise a Mess which Cook call 'd his black Sheep, who were at times apt to get too much grog and Quarrel in their Cups." And he notes: "Captain Cook made all us young gentlemen, do the duty aloft the same as the Sailors, learning to hand, and reef the sails, and Steer the Ship, Exercise Small Arms & thereby making us good Sailors, as well as good Officers." Cook describes the hard sailing this well knit crew encountered going farther south than man had been before: "Our ropes were like wires, Sails like board or plates of Metal and the Sheaves froze fast in the blocks so that it required our utmost effort to get a Top-sail down and up; the cold so intense hardly to be endured, the whole Sea in a manner covered with ice, a hard gale and a thick fog; urn::ler all these unfavourable circumstances it was natural for me to think of returning more to the North." John Forster the naturalist recorded a moment of horror when "a huge mountainous wave struck the ship on the beam, and filled the decks with a deluge of water. It poured through the sky-light over our heads, and extinguished the candle, leaving us for a moment in doubt whether we were not totally overwhelmed and sinking into the abyss." But Cook describes the Resolution in a heavy beam sea under a press of sail; "she went at a great rate and altho we went in the trough of the Sea, which as I have just observed run very high, we ship'd no water to speake of, nor indeed has she done it at any other time. Upon the whole she goes as dry over the Sea as any ship I ever met with." The Third Voyage: 1776-80 Yet another voyage to the Pacific was being prepared to discover the legendary Northwest Passage, which like Terra Australis Incognita, had long been the subject of much geographical speculation. An ice-free passage north of the Americas to the riches of Cathay had been a dazzling prospect since the time of the Elizabethans. The Resolution, again under Cook's command, and another collier, renamed Discovery, would accompany her in this great

undertaking for which Cook had volunteered. After sailing dowh Channel Cook anchored in Plymouth Sound and noted in his journal that "His Majestys Ships Diamond, Ambuscade and Unicorn with a fleet of transports consisting of sixty two sail bound to America with the last division of the Hessian Troops and some horse, were forced into the Sound by a strong sw wind." Cook weighed and stood out of the Sound, and with head winds plied down Channel, then standing south into the Atlantic to begin the long voyage into the Pacific. He departed from the Cape of Good Hope in late November, 1776 with cattle, horses, sheep, goats, rabbits and poultry with even a peacock and hen for introduction into New Zealand and the Pacific Islands. Cook expressed concern about the future of the Islanders by noting that: we debauch their morals already prone to vice and we introduce among them wants and perhaps diseases which they never before knew and which serve only to disturb that happy tranquility they and their forefathers had enjoyed. If anyone denies the truth of this assertion let him tell what the natives of the whole extent of America have gained by the commerce they had had with Europeans .

The ships departed from Tahiti bound towards New Alb ion, which had been discovered by Drake in 1579, and is now the California coast north of San Francisco. Cook made a landfall on the coast of Oregon which he named Cape Foulweather, the weather continued with gales of sleet and snow as the ships struggled north. Cook noted what he took to be "a small opining in the land which flattered us with hopes of finding a harbour, these hopes lessened as we drew nearer, and at last we had some reason to think that this opining was closed by low land. On this account I called the point of land to the North of it Cape Resolution's figurehead-a ta/bot, a dog noted for resolute hunting and tracking. Now in the Dominion Museum, Wellington, New Zealand.

Flatery ... it is in the very latitude we were now in where geographers have placed the pretended Strait of Juan de Fuca, but we saw nothing like it, nor is there the least probability that ever any such thing existed". De Fuca is a vague and dubious figure in history, and he claimed to have sai led from the Pacific to the Atlantic, and back again, while searching for the Strait of Anian while in the employ of the viceroy of Mexico in 1592. It was late in the evening of March 22, 1778 when Cook named Cape Flatery, and after standing seaward, he intended examining the land again at daylight, but the weather deteriorated, and he made an offing in gales of rain and sleet from the south. A week later Cook came to anchor in Nootka Sound, on what is now Vancouver Island, where considerable work was done in repairing and refitting the Resolution's masts and rigging. He sailed on north and west making a running survey of the North American and Alaskan seaboard of three thousand miles in only four months, with its many inlets and islands. In the eastern Aleutians the vessels were almost lost when coming to anchor in thick fog and, says Clerke were saved by "very nice pilotage, considering our perfect Ignorance of our situation." Cook sailed north through Behring Strait in fog and cold, finally being turned back by impenetrable ice at 71 Â° 41' N. He then surveyed part of the Asiatic coast in early September, meeting Russian traders on the island of Unalaska, in the Aleutians. Deferring further exploration in the Arctic till spring, Cook sailed south discovering more islands which he realized were part of the Hawaiian group. On November 30, the island of Hawaii was sighted and the vessels came to anchor in Kealakekua Bay. Cook was received by a multitude of ten thousand islanders in a thousand canoes. Cook had difficulties with his men refusing to drink sugar cane beer in lieu of brandy, and while he had done everything possible to prevent the introduction of venereal disease into the islands by his sailors, this proved an impossible task. Cook's arrival in the islands fulfi lled legend and prophecy that he was Lono, or Robo, the deity of peace and abundance, who would one day return to the islands. It all ended on the morning of February 14 when it was found that the Discovery's cutter had been stolen (probably for her ironwork). Cook decided to go ashore with a party of