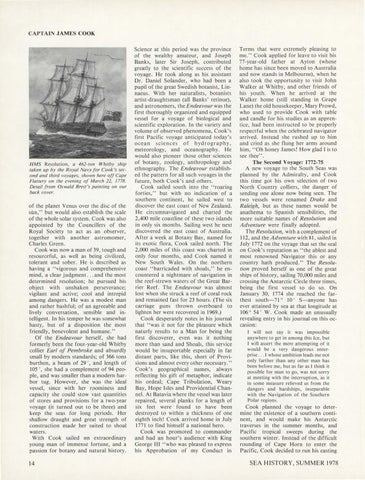 HMS Resolution, a 462-ton Whitby ship taken up by the Royal Navy for Cook&#39;s second and third voyages, shown here off Cape Flallery on the evening of March 22, 1778. Detail from Oswald Brett&#39;s painting on our back cover.

of the planet Venus over the disc of the sun,&quot; but would also establish the scale of the whole solar system. Cook was also appointed by the Councillers of the Royal Society to act as an observer, together with another astromomer, Charles Green. Cook was now a man of 39, tough and resourceful, as well as being civilized, tolerant and sober. He is described as having a &quot;vigorous and comprehensive mind, a clear judgment. .. and the most determined resolution; he pursued his object with unshaken perseverance; vigilant and active; cool and intrepid among dangers. He was a modest man and rather bashful; of an agreeable and lively conversation, sensible and intelligent. In his temper he was somewhat hasty, but of a disposition the most friendly, benevolent and humane.&quot; Of the Endeavour herself, she had formerly been the four-year-old Whitby collier Earl of Pembroke and absurdly small by modern standards; of 366 tons burthen, a beam of 29 &#39;, and length of 105 &#39; , she had a complement of 94 people, and was smaller than a modern harbor tug. However, she was the ideal vessel, since with her roominess and capacity she could stow vast quantities of stores and provisions for a two-year voyage (it turned out to be three) and keep the seas for long periods. Her shallow draught and great strength of construction made her suited to shoal waters. With Cook sailed en extraordinary young man of immense fortune, and a passion for botany and natural history.

Science at this period was the province of the wealthy amateur, and Joseph Banks, later Sir Joseph, contributed greatly to the scientific success of the voyage. He took along as his assistant Dr. Daniel Solander, who had been a pupil of the great Swedish botanist, Linnaeus. With her naturalists, botanists artist-draughtsman (all Banks&#39; retinue), and astronomers, the Endeavour was the first thoroughly organized and equipped vessel for a voyage of biological and scientific exploration . In the variety and volume of observed phenomena, Cook&#39;s first Pacific voyage anticipated today&#39;s ocean sciences of hydrography, meteorology, and oceanography . He would also pioneer those other sciences of botany, zoology, anthropology and ethnography. The Endeavour established the pattern for all such voyages in the future, both Cook&#39;s and others . Cook sailed south into the &quot;roaring forties,&quot; but with no indication of a southern continent, he sailed west to discover the east coast of New Zealand. He circumnavigated and charted the 2,400 mile coastline of these two islands in only six months. Sailing west he next discovered the east coast of Australia. After a week at Botany Bay, named for its exotic flora, Cook sailed north. The 2,000 miles of this coast was charted in only four months, and Cook named it New South Wales . On the northern coast &quot;barricaded with shoals,&quot; he encountered a nightmare of navigation in the reef-strewn waters of the Great Barrier Reef. The Endeavour was almost lost when she struck a reef of coral rock and remained fast for 23 hours. (The six carriage guns thrown overboard to lighten her were recovered in 1969.) Cook desperately notes in his journal that &quot;was it not for the pleasure which naturly results to a Man for being the first discoverer, even was it nothing more than sand and Shoals, this service would be insuportable especially in far distant parts, like this, short of Provisions and almost every other necessary.&quot; Cook&#39;s geographical names, always reflecting his gift of metaphor, indicate his ordeal; Cape Tribulation, Weary Bay, Hope Isles and Providential Channel. At Batavia where the vessel was later repaired, several planks for a length of six feet were found to have been destroyed to within a thickness of one eighth inch! Cook arrived home in July 1771 to find himself a national hero . Cook was promoted to commander and had an hour&#39;s audience with King George III &quot;who was pleased to express his Approbation of my Conduct in

Terms that were extremely pleasing to me.&quot; Cook applied for leave to visit his 77-year-old father at Ayton (whose home has since been moved to Australia and now stands in Melbourne), when he also took the opportunity to visit John Walker at Whitby, and other friends of his youth. When he arrived at the Walker home (still standing in Grape Lane) the old housekeeper, Mary Prowd, who used to provide Cook with table and candle for his studies as an apprentice, had been instructed to be properly respectful when the celebrated navigator arrived. Instead she rushed up to him and cried as she flung her arms around him, &quot;Oh honey James! How glad 1 is to see thee&quot;. The Second Voyage: 1772-75 A new voyage to the South Seas was planned by the Admiralty, and Cook this time got his own selection of two North Country colliers, the danger of sending one alone now being seen. The two vessels were renamed Drake and Raleigh, but as these names would be anathema to Spanish sensibilities, the more suitable names of Resolution and Adventure were finally adopted. The Resolution, with a complement of 112, and the Adventure with 81, sailed in July 1772 on the voyage that set the seal on Cook&#39;s reputation as &quot;the ablest and most renowned Navigator this or any country hath produced.&quot; The Resolution proved herself as one of the great ships of history, sailing 70,000 miles and crossing the Antarctic Circle three times, being the first vessel to do so. On January 30, 1774 she reached the farthest south-&#39;-71 Â° 10&#39; S-anyone has ever attained by sea at that longitude at 106 Â° 54&#39; W. Cook made an unusually revealing entry in his journal on this occasion: I will not say it was impossible anywhere to get in among this Ice, but I will assert the mere allempting of it wou ld be a very dangerous enterprise ... I whose ambition leads me not only farther than any other man has been before me, but as far as I think it possible for man to go, was not sorry at meeting with the interruption, as it in some measure relieved us from the dangers and hardships, inseparable with the Navigation of the Southern Polar regions. Cook planned the voyage to determine the existence of a southern continent, and would make his Antarctic traverses in the summer months, and Pacific tropical sweeps during the southern winter. Instead of the difficult rounding of Cape Horn to enter the Pacific, Cook decided to run his easting