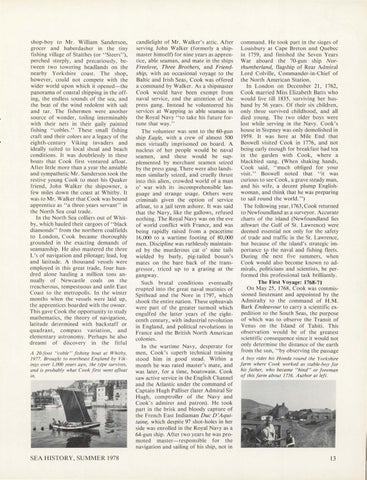 shop-boy to Mr. William Sanderson, grocer and haberdasher in the tiny fishing village of Staithes (or "Steers"), perched steeply, and precariously, between two towering headlands on the nearby Yorkshire coast. The shop, however, could not compete with the wider world upon which it opened-the panorama of coastal shipping in the offing, the endless sounds of the sea, and the beat of the wind redolent with salt and tar. The fishermen were another source of wonder, toiling interminably with their nets in their gaily painted fishing "cables." These small fishing craft and their colors are a legacy of the eighth-century Viking invaders and ideally suited to local shoal and beach conditions. It was doubtlessly in these boats that Cook first ventured afloat. After little more than a year the amiable and sympathetic Mr. Sanderson took the restive young Cook to meet his Quaker friend, John Walker the shipowner, a few miles down the coast at Whitby. It was to Mr. Walker that Cook was bound apprentice as "a three-years servant" in the North Sea coal trade. In the North Sea colliers out of Whitby, which hauled their cargoes of "black diamonds" from the northern coalfields to London, Cook became thoroughly grounded in the exacting demands of seamanship. He also mastered the three L's of navigation and pilotage; lead, log and latitude. A thousand vessels were employed in this great trade, four hundred alone hauling a million tons annually of Newcastle coals on the treacherous, tempestuous and unlit East Coast to the metropolis. In the winter months when the vessels were laid up, the apprentices boarded with the owner. This gave Cook the opportunity to study mathematics, the theory of navigation, latitude determined with backstaff or quadrant, compass variation, and elementary astronomy. Perhaps he also dreamt of discovery in the fitful A 20-fool "coble" fishing boa! al Whilby, 1977. Brough! 10 northeast England by Vikings over 1,000 years ago, !he type survives, and is probably wha! Cook first wen! afloat in.

candlelight of Mr. Walker's attic . After serving John Walker (formerly a shipmaster himself) for nine years as apprentice, able seaman, and mate in the ships Freelove, Three Brothers, and Friendship, with an occasional voyage to the Baltic and Irish Seas, Cook was offered a command by Walker. As a shipmaster Cook would have been exempt from naval service, and the attention of the press gang. Instead he volunteered his services at Wapping as able seaman in the Royal Navy "to take his future fortune that way." The volunteer was sent to the 60-gun ship Eagle, with a crew of almost 500 men virtually imprisoned on board. A nucleus of her people would be naval seamen, and these would be supplemented by merchant seamen seized by the press gang. There were also landsmen similarly seized, and cruelly thrust into this alien, crowded world of a man o' war with its .incomprehensible language and strange usage. Others were criminals given the option of service afloat, to a jail term ashore. It was said that the Navy, like the gallows, refused nothing. The Royal Navy was on the eve of world conflict with France, and was being rapidly raised from a peacetime 16,000 to a wartime footing of 80,000 men. Discipline was ruthlessly maintained by the murderous cat o' nine tails wielded by burly, pig-tailed bosun's mates on the bare back of the transgressor, triced up to a grating at the gangway. Such brutal conditions eventually erupted into the great naval mutinies of Spithead and the Nore in 1797, which shook the entire nation. These upheavals were part of the greater turmoil which engulfed the latter years of the eighteenth century, with industrial revolution in England, and political revolutions in France and the British North American colonies. In the wartime Navy, desperate for men, Cook's superb technical training stood him in good stead. Within a month he was rated master's mate, and was later, for a time, boatswain. Cook saw active service in the English Channel and the Atlantic under the command of Captain Hugh Palliser (later Admiral Sir Hugh, comptroller of the Navy and Cook's admirer and patron). He took part in the brisk and bloody capture of the French East lndiaman Due D'Aquitain~, which despite 97 shot-holes in her side was enrolled in the Royal Navy as a 64-gun ship. After two years he was promoted master-responsible for the navigation and sailing of his ship, not in

command. He took part in the sieges of Louisbury at Cape Breton and Quebec in 1759, and finished the Seven Years War aboard the 70-gun ship Northumberland, flagship of Rear Admiral Lord Colville, Commander-in-Chief of the North American Station. In London on December 21, 1762, Cook married Miss Elizabeth Batts who would live till 1835, surviving her husband by 56 years. Of their six children, only three survived childhood, and all died young. The two older boys were lost while serving in the Navy. Cook's house in Stepney was only demolished in 1959. It was here at Mile End that Boswell visited Cook in 1776, and not being early enough for breakfast had tea in the garden with Cook, where a blackbird sang. (When shaking hands, Cook said, "much obliged for your visit." Boswell noted that "it was curious to see Cook, a grave steady man, and his wife, a decent plump Englishwoman, and think that he was preparing to sail round the world.") The following year, 1763, Cook returned to Newfoundland as a surveyor. Accurate charts of the island (Newfoundland lies athwart the Gulf of St. Lawrence) were deemed essential not only for the safety of trade and traffic in the St. Lawrence, but because of the island's strategic importance to the naval and fishing fleets. During th'e next five summers, when Cook would also become known to admirals, politicians and scientists, he performed this professional task brilliantly. The First Voyage: 1768-71 On May 25, 1768, Cook was commissioned lieutenant and appointed by the Admiralty to the command of H.M. Bark Endeavour to carry a scientific expedition to the South Seas, the purpose of which was to observe the Transit of Venus on the Island of Tahiti. This observation would be of the greatest scientific consequence since it would not only determine the distance of the earth from the sun, "by observing the passage A boy rides his Honda round the Yorkshire farm where Cook worked as s1able-boy for his father, who became "hind" or foreman of this farm about 1736. Author at left.