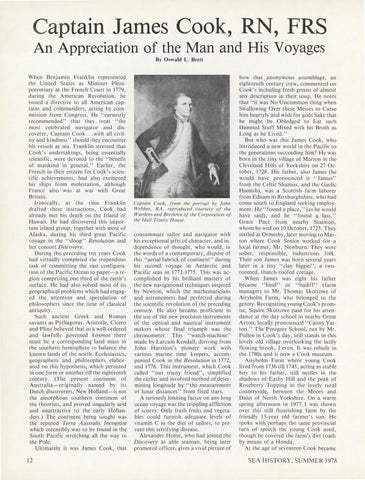 Captain James Cook, RN, FRS An Appreciation of the Man and His Voyages By Oswald L. Brett When Benjamin Franklin represented the United States as Minister Plenipotentiary at the French Court in 1779, during the American Revolution, he issued a directive to all American captains and commanders, acting by commission from Congress. He "earnestly recommended" that they treat "the most celebrated navigator and discoverer, Captain Cook ... with all civility and kindness" should they encounter his vessels at sea. Franklin stressed that Cook's undertakings, being essentially scientific, were devoted to the "benefit of mankind in general." Earlier, the French in their esteem for Cook's scientific achievements, had also exempted his ships from molestation, although France also was at war with Great Britain. Ironically, at the time Franklin drafted these instructions, Cook had already met his death on the Island of Hawaii. He had discovered this important island group, together with most of Alaska, during his third great Pacific voyage in the "sloop" Resolution and her consort Discovery. During the preceding ten years Cook had virtually completed the stupendous task of committing the vast configuration of the Pacific Ocean to paper-a region comprising one third of the earth's surface. He had also solved most of its geographical problems which had engaged the attention and speculation of philosophers since the time of classical antiquity. Such ancient Greek and Roman savants as Pythagoras, Aristotle, Cicero and Pliny believed that in a well-ordered and lawfully governed kosmos there must be a corresponding land mass in the southern hemisphere to balance the known lands of the north. Ecclesiastics, geographers and philosophers elaborated on this hypothesis, which persisted in one form or another till the eighteenth century. (The present continent of Australia-originally named by its Dutch discoverers, New Holland-is not the amorphous southern continent of the theorists, and proved singularly arid and unattractive to the early Hollanders.) The continent being sought was the reputed Terra Australis lncognita which ostensibly was to be found in the South Pacific stretching all the way to the Pole. Ultimately it was James Cook, that 12

Captain Cook, from the portrait by John Webber, RA, reproduced courtesy of the Wardens and Brethren of the Corporation of the Hull Trinity House.

consummate sailor and navigator with his exceptional gifts of character, and independence of thought, who would, in the words of a contemporary, dispose of this "aerial fa brick of continent" during his second voyage in Antarctic and Pacific seas in 1772-1775. This was accomplished by his brilliant mastery of the new navigational techniques inspired by Newton, which the mathematicians and astronomers had perfected during the scientific revolution of the preceding century. He also became proficient in the use of the new precision instruments of the optical and nautical instrument makers whose final triumph was the chronometer. This "watch-machine" made by Larcum Kendall, deriving from John Harrison's pioneer work with various marine time keepers, accompanied Cook in the Resolution in 1772, and 1776. This instrument, which Cook called "our trusty friend", simplified the earlier and involved method of determining longitude by "the measurement of lunar distances" from fixed stars. A seriously limiting factor on any long ocean voyage was the crippling affliction of scurvy. Only fresh fruits and vegetables could furnish adequate levels of vitamin C in the diet of sailors, to prevent this terrifying disease. Alexander Home, who had joined the Discovery as able seaman, being later promoted officer, gives a vivid picture of

how that anonymous assemblage, an eighteenth century crew, commented on Cook's including fresh greens of almost any description in their soup. He notes that "it was No Uncommon thing when Swallowing Over these Messes to Curse him heartyly and wish for gods Sake that he might be Obledged to Eat such Damned Stuff Mixed with his Broth as Long as he Lived." But who was this James Cook, who introduced a new world in the Pacific to the generations succeeding him? He was born in the tiny village of Marton in the Cleveland Hills of Yorkshire on 27 October, 1728. His father, also James (he would have pronounced it "Jam us" from the Celtic Shamus, and the Gaelic Hamish), was a Scottish farm laborer from Ednam in Roxburghshire, who had come south to England seeking employment. He" found a place," (as he would have said), and he "found a lass," Grace Pace from nearby Stainton, whom he wed on 10 October, 1725. They settled at Ormesby, later moving to Marton where Cook Senior worked for a local farmer, Mr. Newburn. They were sober, responsible, industrious folk. Their son James was born several years later in a tiny "clay biggin", a tworoomed, thatch-roofed cottage. When James was eight his father became "hind" or "bailiff" (farm manager) to Mr. Thomas Skottowe of Airyholm Farm, who belonged to the gentry. Recognizing young Cook's promise, Squire Skottowe paid for his attendance at the day school in nearby Great Ayton, locally pronounced "Canny Yatton." The Postgate School, run by Mr. Pullen in Cook's day, still stands in this lovely old village overlooking the lazily nowing brook, Leven. It was rebuilt in the 1780s and is now a Cook museum. Airyholm Farm where young Cook lived from 1736 till 1745, acting as stable boy to his father, still nestles in the shadows of Easby Hitt and the peak of Roseberry Topping in the lovely rural countryside, between the Moors and Dales of North Yorkshire. On a warm spring afternoon in 1977 I was shown over this still nourishing farm by the friendly 13-year old farmer's son. He spoke with perhaps the same provincial turn of speech the young Cook used, though he covered the farm's dirt roads by means of a Honda. At the age of seventeen Cook became