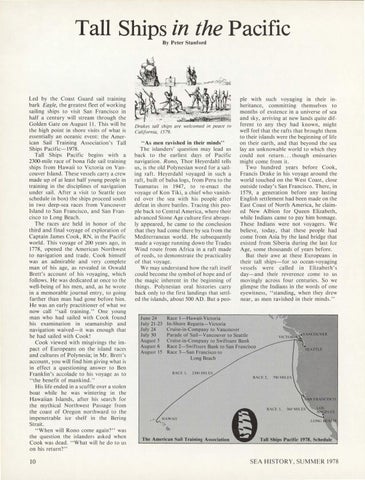 Tall Ships in the Pacific By Peter Stanford

Led by the Coast Guard sail trammg bark Eagle, the greatest fleet of working sailing ships to visit San Francisco in half a century will stream through the Golden Gate on August 11. This will be the high point in shore visits of what is essentially an oceanic event: the American Sai l Training Association&#39;s Tall Ships Pacific-1978. Tall Ships Pacific begins with a 2300-mile race of bona fide sai l training ships from Hawaii to Victoria on Vancouver Island. These vessels carry a crew made up of at least half young people in trainin g in the disciplines of navigation under sail. After a visit to Seattle (see schedule in box) the ships proceed south in two deep-sea races from Vancouver Island to San Francisco, and San Francisco to Long Beach. The races are held in honor of the third and final voyage of explorat ion of Captain James Cook, RN, in the Pacific world. This voyage of 200 years ago, in 1778, opened the American Northwest to navigation and trade. Cook himself was an adm irable and very complete man of his age, as revealed in Oswald Brett&#39;s account of his voyaging, which follows. He was dedicated at once to the well-being of his men, and, as he wrote in a memorable journal entry, to going farther than man had gone before him. He was an early practitioner of what we now call &#39;&#39;sail training.&quot; One young man who had sailed with Cook found his examination in seamanship and navigation waived-it was enoug h that he had sailed with Cook! Cook viewed with misgivings the impact of Europeans on the island races and cultures of Polynesia; in Mr. Brett&#39;s account, you will find him giving what is in effect a questioning answer to Ben Franklin&#39;s accolade to his voyage as to &quot;the benefit of mankind.&quot; His life ended in a scuffle over a stolen boat while he was wintering in the Hawaiian Islands, after his search for the mythical Northwest Passage from the coast of Oregon northward to the impenetrable ice shelf in the Bering Strait. &quot;When will Rono come again?&quot; was the question the islanders asked when Cook was dead. &quot;What will he do to us on his return?&quot;

Drakes tall ships are welcomed in peace to California, 1579.

&quot;As men ravished in their minds&quot; The islanders&#39; question may lead us back to the earliest days of Pacific navigation . Rono, Thor Heyerdahl tells us, is the old Polynesian word for a sailing raft. Heyerdahl voyaged in such a raft, built of balsa logs, from Peru to the Tuamatus in 1947, to re-enact the voyage of Kon Tiki, a chief who vanished over the sea with his people after defeat in shore battles. Tracing this people back to Central America, where their advanced Stone Age culture first abruptly appeared, he came to the conclusion that they had come there by sea from the Mediterranean world. He subsequently made a voyage running down the Trades Wind route from Africa in a raft made of reeds, to demonstrate the practicality of that voyage. We may understand how the raft itself could become the symbol of hope and of the magic inherent in the beginning of things. Polynesian oral histories carry back only to the first landings that settled the islands, about 500 AD . But a peo-

pie with such voyaging in their inheritance, committing themselves to months of exstence in a universe of sea and sky, arriving at new lands quite different to any they had known, might well feel that the rafts that brought them to their islands were the beginning of life on their earth, and that beyond the sea lay an unknowable world to which they cou ld not return .. . though emissaries might come from it. Two hundred years before Cook, Francis Drake in his voyage around the world touched on the West Coast, close outside today&#39;s San Francisco. There, in 1579, a generation before any lasting English settlement had been made on the East Coast of North America, he claimed New Albion for Queen E li zabeth, while Indians came to pay him homage. These Indians were not voyagers. We believe, today, that these people had come from Asia by the land bridge that existed from Siberia during the last Ice Age, some thousands of years before . But their awe at these Europeans in their tall ships-for so ocean-voyaging vessels were called in Elizabeth&#39;s day-and their reverence come to us movingly across four centuries. So we glimpse the Indians in the words of one eyewitness, &quot;standing, when they drew near, as men ravished in their minds.&quot;