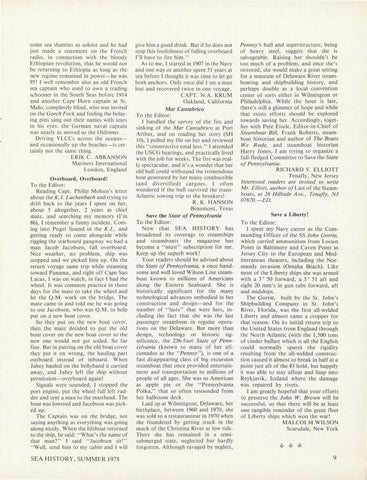 some sea shanties as so loist and he had just made a statement on the French radio, in connection with the bloody Ethiopian revolution, that he would not be returning to Ethiopia as long as the new regime remained in power-he was 95! I well remember also an old French sea captain who used to own a trading schooner in the South Seas before 1914 and a nother Cape Horn captain at St. Malo, completely blind, who was in vited on the Corch Fack and feeling the belaying pins sang out their names with tears in his eyes: the German naval captain was nearly as moved as the Old timer ... Driving YLCCs across the oceansand occasionally up the beaches-is certainly not the same thing. ERIK C. ABRANSON Mariners International London, England Overboard, Overboard! To the Editor: Reading Capt. Philip Mohun's letter about the K. l. Luchenbach and trying to drift back to the years I spent on her, about 5 altogether, 2 years as chief mate, and searching my memory (I'm 86), I remember a funny incident. Coming into Puget Sound in the K. I., and getting ready to come alongside while rigging the starboard gangway we had a man Jacob Jacobsen, fall overboard. Nice weather, no problem, ship was stopped a nd we picked him up. On the return voyage same trip while steaming toward Panama, and right off Cape San Lucas, I was on watch, in fact I had the wheel. It was common practice in those days for the mate to take the wheel and let the Q.M. work on the bridge. The mate came in and told me he was going to use Jacobsen, who was Q.M. to help put on a new boat cover. So they put on the new boat cover, then the mate decided to put the old boat cover on the new boat cover so the new one wou ld not get soiled. So far fine. But in putting on the old boat cover they put it on wrong, the hauling part outboard instead of inboard. When Jabey hauled on the bellyband it carried away, and Jabey left the ship without permission-overboard again! Signals were sounded, I stopped the port engine, put the wheel full left rudder and sent a man to the masthead. The boat was lowered and Jacobson was picked up. The Captain was on the bridge, not sayi ng a nyt hing as everything was going along nicely. When the Ii feboat returned to the ship, he said: "What's the name of that man?" I said "Jacobsen sir!" "Well, send him to my cabin and I will

give him a good drink. But if he does not stop this foolishness of falling overboard I' ll have to fire him." As to me, I started in 1907 in the Navy and one way or another spent 51 years at sea before I thought it was time to let go both anchors. Only once did I see a man lost and recovered twice in one voyage. CAPT. N.A. KRUM Oakland, Cali fornia

Mar Cantabrico To the Editor: I handled the survey of the fire and sinking of the Mar Cantabrico at Port Arthur, and on reading her story (SH 10), I pulled my file on her and reviewed this "constructive total loss." I attended the USCG hearings, and practically lived with the job for weeks. The fire was really spectacular, and it's a wonder that her old hull could withstand the tremendous heat generated by her many combustible (and diversified) cargoes. I often wondered if the hull survived the transAt lantic towing trip to the breakers! R. K. HANSON Beaumont, Texas Save the State of Pennsylvania To the Editor: Now that SEA HISTORY has broadened its coverage to steamships and steamboats the magazine has become a "must" subscripti on for me. Keep up the superb work! Your readers should be advised about the State of Pennsylvania, a once handsome and well loved Wilson Line steamboat known to millions of Americans along the Eastern Seaboard. She is historically significant for the many technological advances embodied in her construction and design-and for the number of "lasts" that were hers, including the fact that she was the last passenger steamboat in regular operations on the Delaware. But more than design, technology or historic significance, the 236-foot State of Pennsylvania (known to many of her aficionados as the "Pennsy"), is one of a fast disappearing class of big excursion steamboat that once provided entertainment and transportation to millions of people of all ages . She was as American as apple pie or the "Pennsylva nia Polka," that so often resounded from her ballroom deck. Laid up at Wilmington, Delaware, her birthplace, between 1960 and 1970, she was sold to a restauranteur in 1970 when she foundered by getting stuck in the muck of the Christina River at low tide. There she has remained in a semisubmerged state, neglected but hardly forgotten. Although ravaged by neglect,

Pennsy's hull and superstructure, being of heavy steel, suggest that she is salvageable. Raising her' shou ldn 't be too much of a problem, and once she's restored, she would make a great setting for a museum of Delaware River steamboating and shipbuilding history, and perhaps double as a local convention center of sorts either in Wilmington or Philadelphia. While the hour is late, there's sti ll a glimmer of hope and while that exists efforts should be explored towards saving her. Accordingly, together with Pe.te Eisele, Editor-in-Chief of Steamboat Bill, Frank Roberts, steamboat historian and author of The Boats We Rode, and steamboat historian Harry Jones, I am trying to organize a full-fledged Committee to Save the State of Pennsylvania. RICHARD V. ELLIOTT Tenafly, New Jersey

Interested readers are invited to write Mr. Elliott, author of Last of th e Steamboats, at 26 Hillside Ave., Tenafly, NJ 07670.-ED. Save a Liberty! To the Edito r: I spent my Navy career as the Commanding Officer of the SS John Corrie, which carried ammunition from Locust Point in Baltimore and Caven Point in Jersey City to the European and Mediterranean theaters, including the Normandy invasion (Omaha Beach). Like most of the Liberty sh ips she was armed with a 3 11 50 forward, a 5 11 51 aft and eight 20 mm's in gun tubs forward, aft and midships. The Corrie, built by the St. John's Shipbuilding Company in St. John's River, Florida, was the first all-welded Liberty and almost came a cropper for that reason. On its initial return trip to the United States from England through the North Atlantic (with the 1,500 tons of cinder ballast which is all the Engli sh could normally spare) the rigidity resulting from the all-welded construction caused it almost to break in half at a point just aft of the #3 hold, but happily it was able to stay afloat and limp into Reykjavik, Iceland where the damage was repaired by rivets. I am greatly hopeful that your efforts to preserve the John W. Brown will be successfu l, so that there wi ll be at least one tangible reminder of the great fleet of Liberty ships which won the war! MALCOLM WILSON Scarsdale, New York