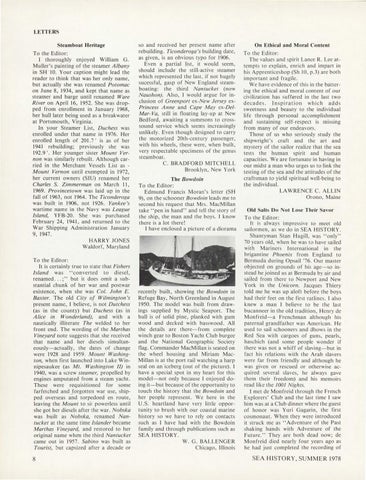 LETTERS Steamboat Heritage To the Editor: I thoroughly enjoyed William G. Muller&#39;s painting of the steamer Albany in SH Âˇ w. Your caption might lead the reader to think that was her only name, but actually she was renamed Potomac on June 8, 1934, and kept that name as steamer and barge until renamed Ware River on April 16, 1952. She was dropped from enrollment in January 1968, her hull later being used as a breakwater at Portsmouth, Virginia. In your Steamer List, Duchess was enrolled under that name in 1976. Her enrolled length of 201.7&#39; is as of her 1941 rebuilding; previously she was 192.9 &#39;. Her younger sister Mount Vernon was similarly rebuilt. Although carried in the Merchant Vessels List as Mount Vernon until exempted in 1972, her current owners (SIU) renamed her Charles S. Zimmerman on March 11, 1969. Provincetown was laid up in the fall of 1963, not 1964. The Ticonderoga was built in 1906, not 1926. Yankee&#39;s wartime name in the Navy was League Island, YFB-20. She was purchased February 24, 1941, and returned to the War Shipping Administration January 9, 1947. HARRY JONES Waldorf, Maryland To the Editor: It is certainly true to sta te that Fishers Island was &quot;converted to diesel, renamed ... ; &#39;&#39; but it does omit a substantial chunk of her war and postwar existence, when she was Col. John E. Baxter. The old City of Wilmington&#39;s present name, I believe, is not Dutchess (as in the county) but Duchess (as in Alice in Wonderland), and with a nautically illiterate The welded to her front end. The wording of the Mar/has Vineyard note suggests that she received that name and her diesels simultaneously-actually, the dates of change were 1928 and 1959. Mount Washington, when first launched into Lake Winnipesaukee (as Mt. Washington ll) in 1940, was a screw steamer, propelled by engines amputated from a steam yacht. These were requi sitioned for some farfetched and Jorgotten war use, shipped overseas and torpedoed en route, leaving the Mount to sit powerless until she got her diesels after the war. Nobska was built as Nobska, renamed Nantucket at the sa me time Islander became Marthas Vineyard, and restored to her original nam e when the third Nantucket came out in 1957. Sabino was built as Tourist, vut capsized after a decade or

so and received her present name after rebuilding. Ticonderoga&#39;s building date, as given, is an obvious typo for 1906. Even a partial list, it would see m, should include the still-active stea mer which represe nted the last, if not hugely sucessful, gasp of New England steamboating: the third Nantucket (now Naushon). Also, I would argue for inclusion of Greenport ex-New Jersey exPrincess Anne and Cape May ex-De/Mar- Va, still in floating lay-up at New Bedford, awaiting a summons to crosssound service which seems increasingly unlikely. Even though designed to carry the motori zed 20th-century passenger, with his wheels, these were, when built , very respectable specimens of the genus steamboat. C. BRADFORD MITCHELL Brooklyn, New York

The Bowdoin To the Editor: Edmund Francis Moran&#39; s letter (SH 9), on the schooner Bowdoin leads me to seco nd his request that Mrs. MacMillan take &quot;pen in hand&quot; and tell the story of the ship, the man and the boys. I know there is a lot there! I have enclosed a picture of a diorama

recently built, showing the Bowdoin in Refuge Bay, North Greenland in August 1950. The model was built from drawings supplied by Mystic Seaport. The hull is of solid pine, pla nked with gum wood and decked with basswood. All the details are there-from complete winch gear to Boston Yacht Club burgee and the National Geographic Society flag. Commander MacMillan is seated on the wheel housing and Miriam MacMillan is at the port rail watching a harp seal on an iceberg (out of the picture). I have a special spot in my heart for this model-not only because I enjoyed doing it-but because of the opportunity to touch the history that the Bowdoin and her people represent. We here in the U.S. heartland have very little opportunity to brush with our coastal marine history so we have to rely on contacts such as I have had with the Bowdoin family and through publications such as SEA HISTORY. W. G. BALLENGER Chicago, Illinois

On Ethical and Moral Content To the Editor: The values and spirit Lance R. Lee attempts to expla in, enrich and impart in his Apprenticeshop (Sh I 0, p.3) are both importa nt and fragile. We have evidence of this in the battering the ethical and moral content of our civilization has suffered in the last two d eca des. Inspiration which adds sweetness and beauty to the individual life through personal accomplishment and sustaining self-respect is missing from many of our endeavors. Those of us who seriously st udy the shipwright&#39;s craft and the art and mystery of the sailor reali ze that the sea tests the human spirit and human capacities. We are fortunate in having in our midst a man who urges us to link the testing of the sea and the attitudes of the craftsman to yield spiritual well-being to the individual. LAWRENCE C. ALLIN Orono, Maine

Old Salts Do Not Lose Their Savor To the Editor: It is always impressive to meet old sailormen, as we do in SEA HISTORY . Shantyman Stan Hugill, was &quot;only&quot; 70 years old, when he was to have sailed with Mariners International in the brigantine Phoenix from England to Bermuda durin g Opsail &#39;76. Our maste r objected on grounds of his age-so instead he joined us at Bermuda by air and sailed from there to Newport and New York in the Unicorn. Jacques Thiery told me he was up aloft before the boys had their feet on the fir st ratlines. I also knew a man I believe to be th e last bucanneer in the old tradition, Henry de Monfreid-a Frenchman although his paternal grandfather was American. He used to sail sc hooners and dhows in the Red Sea with cargoes of guns, pearls, haschich (and so me people wonder if there was not a whiff of slaving- but in fact hi s relations with the Arab slavers were far from friendly and a lthough he was give n or resc ued or otherwise acquired several slaves, he always gave them their freedom) and his memoirs read like the 1001 Nights. I met de Monfreid through the French Explorers&#39; Club and the last time I saw him was at a Club dinner where the guest of honor was Yuri Gagarin, the first cosmonaut. When they were introduced it struck me as &quot;Adventure of the Past shaking hands with Adventure of the Future.&quot; They are both dead now; de Monfreid died near ly four years ago as he had just completed the recording of