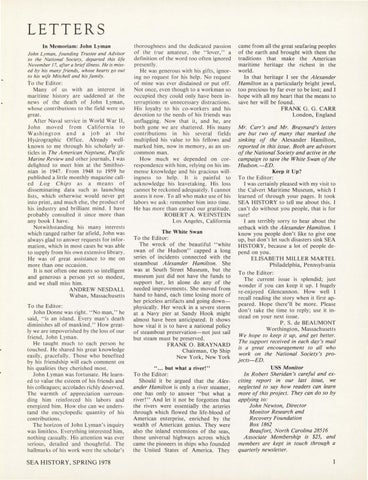 LETTERS In Memoriam: John Lyman John Lyman, founding Trustee and Advisor to the National Society, departed this life November 17, after a brief illness. He is missed by his many friends, whose hearts go out to his wife Mitchell and his family. To the Editor: Many of us with an interest in maritime history are saddened at the news of the death of John Lyman, whose contributions to the field were so great. After Naval service in World War ll , John moved from Ca li fornia to Washington and a job at the H ydrographic Office . Already wellk nown to me throu gh his scholarl y articles in The American Neptune, Pacific Marine Review and other journals, I was delighted to meet him at the Smithsonian in 1947. From 1948 to 1959 he published a little monthly magazine called Log Chips as a means of dissemin ati ng data such as launching lists, which otherwise would never get into print, and much else, the product of his industry and brilliant mind. I have probably consu lted it since more than any book 1 have. Notwithstanding his many interests which ranged rather far afie ld , John was always glad to answer requests for information, which in most cases he was able to supply from his own extensive library. H e was of great assistance to me on more than one occasion. It is not often one meets so intelligent and generous a person yet so modest, and we shall miss him . ANDREW NESDALL Waban, Massachusetts To the Editor: John Donne was ri ght. &quot;No man,&quot; he said, &quot; is an island. Every man&#39;s death diminishes all of mankind.&quot; How greatly we are impoveris hed by the loss of our friend, John Lyman. He taught much to each person he touched . He shared his great knowledge easil y, gracefu ll y. Those who benefited by his friendship will each comment on his qualities they cherished most. John Lyman was fortunate. He learned to value the es teem of his friends and his colleagues; accolades richl y deserved. The warmth of appreciation surrounding him reinforced his labors and energized him. How else can we understand the encyclopedic quantity of his contributions. The hori zo n of John Lyman&#39;s inquiry was limitless. Everything interested him , nothing casually. His attention was ever serious, detailed a nd thoughtful. The hallmark s of his work were the scholar&#39;s

thoroughness and the dedicated passion of the true amateur, the &quot;lover,&quot; a definition of th e word too often ignored presently. He was ge nerous with hi s gifts, ignoring no requ est for his help . No request of mine was ever disdained or put off. Not once, even though to a workma n so occupied they co uld only have been interruptions or unnecessary distractions. His loya lt y to his co-workers and his devotion to the needs of hi s friend s was unflagging. Now that it, a nd he, are both gone we are shattered. His many contributions in his several fields multiplied his value to his fellows and marked him, now in memory, as an uncommon man . How much we depended on correspondence with him, relying on his immense knowledge and his gracious willingness to help . It is painful to ack nowledge his leavetaking. His loss cannot be reckoned adequately. I cannot assess it now . To all who make use of his labors we ask: remember him into time. He has more than earned our grat itude. ROBERT A. WEINSTEIN Los Angeles, California The White Swan To the Editor: The wreck of the beautiful &quot;white swan of the Hudson&quot; capped a long series of incidents connected with the steamboat Alexander Hamilton. She was at South Street Museum, but the museum just did not have the funds to support her, let alone do any of the needed improvements. She moved from hand to hand, each time losing more of her priceless artifacts and going downphysically. Her wreck in a severe storm at a Navy pier at Sandy Hook might almost have been anticipated. It shows how vital it is to have a national policy of steamboat preserva tion-not just sail but steam must be preserved. FRANK 0 . BRA YNARD Chairman, Op Ship New York, New York &quot; ... but what a river!&quot; To the Editor: Should it be argued that the Alexander Hamilton is only a river steamer, one has only to answer &quot; but what a river!&quot; And let it not be forgotten that the rivers were essentially the arteries through which flowed the life-blood of American enterprise, enriched by the wealth of American genius. They were also the inland extensions of the seas, those universal highways across which came the pioneers in ships who founded the United States of America. They

came from all the great seafaring peoples of the earth and brought with them the traditions that make the American maritime heritage the richest in the world. In that heritage I see the Alexander Hamilton as a particularly bright jewel, too precious by far ever to be lost; and I hope with all my heart that the means to save her will be found. FRANK G . G . CARR London, England

Mr. Carr&#39;s and Mr. Braynard &#39;s letters are but two of many that marked the sinking of the Alexander Hamilton, reported in this issue. Both are advisors of the National Society and active in the campaign to save the White Swan of the Hudson.-ED. Keep it Up? To the Editor: I was certainly pleased with my visit to the Calvert Maritime Museum, which I learned of through your pages . It took SEA HISTORY to tell me about this. I can&#39;t do without you people, that is for sure! I am terribly sorry to hear about the setback with the Alexander Hamilton. I know you people don&#39;t like to give one up, but don&#39;t let such disasters sink SEA H !STORY, because a lot of people depend on you. E LISABETH MILLER MARTEL Philadelphia, Pennsylvania To the Editor: The current iss ue is splendid; just wonder if you can kee p it up . I hugely re-enjoyed Glencannon. How well I recall reading the story when it first appeared. Hope there&#39; ll be more. Please don&#39;t take the time to reply; use it instead on your next issue. P . S. de BEAUMONT Worthington, Massachusetts

We hope to keep it up, and get better. The support received in each day&#39;s mail is a great encouragement to all who work on the National Society&#39;s projects-ED. USS Monitor In Robert Sheridan&#39;s careful and exciting report in our last issue, we neglected to say how readers can learn more of this project. They can do so by applying to: John Newton, Director Monitor Research and Recovery Foundation Box 1862 Beaufort, North Carolina 28516 Associate Membership is $25, and members are kept in touch through a quarterly newsletter.