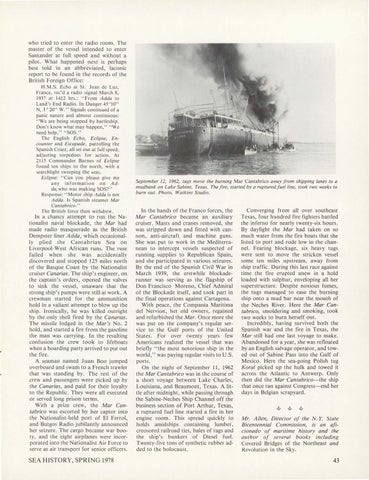 who tried to enter the radio room . The master of the vessel intended to enter Santander at full speed and without a pilot. What happened next is perhaps best told in an abbreviated , laconic report to be found in the records of the British Foreign Office: H.M.S. Echo at St. Jean de Lu z, France, rec&#39;d a radio signal March 8, 1937 at 1412 hrs.: &quot;From Adda to Land&#39;s End Radio. In Danger 45 Â°10&quot; N, 3 Â° 20&quot; W.&quot; Signals continued of a panic nature and almost continuous: &quot; We are being stopped by battleship. Don&#39;t know what may happen, &quot; &quot; We need help,&quot; &quot;SOS.&quot; The English Echo, Eclipse, En counter and Escapade, patrolling the Spanish Coast, all set out at full speed, adjusting torpedoes for action . At 2115 Comma nder Barnes of Eclipse found ten ships to the north, with a searchlight sweeping th e seas. Eclipse: &quot;Can you please give me any information on Adda, who was making SOS?&quot; Response : &quot; Motor ship Adda is not Adda. Is Spanish steamer Mar Canlabrico.&quot; The British force then withdrew.

In a chancy attempt to run the Nationalist naval blockade, the Mar had made radio masquerade as the British Dempster liner Adda, which occasionally plied the Cantabrian Sea on Liverpool-West African runs. The ruse failed when she was accidentally discovered and stopped 125 miles north of the Basque Coast by the Nationalist cruiser Canarias. The ship&#39;s engineer, on the captain&#39;s orders, opened the valves to sink the vessel, unaware that the strong ship&#39;s pumps were still at work. A crewman started for the ammunition hold in a valiant attempt to blow up the ship. Ironically, he was killed outright by the only shell fired by the Canarias. The missile lodged in the Mar&#39;s No. 2 hold, and started a fire from the gasoline the man was carrying. In the resulting confusion the crew took to lifeboats when a boarding party arrived to put out the fire. A seaman named Juan Boo jumped overboard and swam to a French trawler that was standing by . The rest of the crew and passengers were picked up by the Canarias, and paid for their loyalty to the Republic . They were all executed or served long prison terms. With a prize crew, the Mar Cantabrico was escorted by her captor into the Nationalist-held port of El Ferro!, and Butgos Radio jubilantly announced her seizure. The cargo became war booty, and the eight airplanes were incorporated into the Nationalist Air Force to serve as air transport for senior officers .

In the hands of the Franco forces, the

Mar Cantabrico became an auxiliary cruiser. Masts and cranes removed, she was stripped down and fitted with cannon, anti-aircraft and machine guns. She was put to work in the Mediterranean to intercept vessels suspected of running supplies to Republican Spain, and she participated in various seizures. By the end of the Spanish Civil War in March I 939, the erstwhile blockaderunner was serving as the flagship of Don Francisco Moreno, Chief Admiral of the Blockade itself, and took part in the final operations against Cartagena. With peace, the Compania Maritima de! Nervion, her old owners, regained and refurbished the Mar. Once more she was put on the company&#39;s regular service to the Gulf ports of the United States. For over twenty years few Americans realized the vessel that was briefly &quot;the most notorious ship in the world ,&quot; was paying regular visits to U.S. ports. On the night of September 11, 1962 the Mar Cantabrico was in the course of a short voyage between Lake Charles, Louisiana, and Beaumont, Texas. A little after midnight, while passing through the Sabine-Neches Ship Channel off the business section of Port Arthur, Texas, a ruptured fuel line started a fire in her engine room. This spread quickly to holds amidships containing lumber, creosoted railroad ties, bales of rags and the ship&#39;s bunkers of Diesel fuel. Twenty-five tons of synthetic rubber added to the holocaust.

Converging from all over southeast Texas, four hundred fire fighters battled the inferno for nearly twenty-six hours. By daylight the Mar had taken on so much water from the fire boats that she listed to port and rode low in the channel. Fearing blockage, six heavy tugs were sent to move the stricken vessel some ten miles upstream , away from ship traffic . During this last race against time the fire erupted anew in a hold loaded with sulphur, enveloping all her superstructure. Despite noxious fumes, the tugs managed to ease the burning ship onto a mud bar near the mouth of the Neches River. Here the Mar Cantabrico, smoldering and smoking, took two weeks to burn herself out. Incredibly, having survived both the Spanish war and the fire in Texas, the Mar still had one last voyage to make. Abandoned for a year, she was refloated by an English salvage operator, and towed out of Sabine Pass into the Gulf of Mexico . Here the sea-going Polish tug Koral picked up the hulk and towed it across the Atlantic to Antwerp. Only then did the Mar Cantabrico-the ship that once ran against Congress-end her days in Belgian scrapyard.

Mr. Allen, Director of the N. Y. State Bicentennial Commission, is an aficionado of maritime history and the author of several books including Covered Bridges of the Northeast and Kevolution in the Sky.