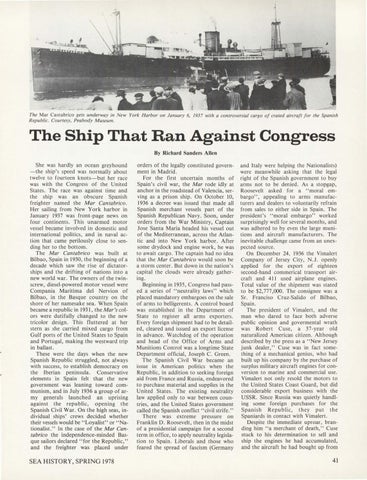 The Mar Cantabrico gets underway in New York Harbor on January 6, 1937 with a controversial cargo of crated aircraft for the Spanish Republic. Courtesy, Peabody Museum.

The Ship That Ran Against Congress By Richard Sanders Allen She was hardly an ocean greyhound -the ship&#39;s speed was normally about twelve to fourteen knots-but her race was with the Congress of the United States. The race was against time and the ship was an obscure Spanish freighter named the Mar Cantabrico. Her sailing from New York harbor in January 1937 was front-page news on four continents. This unarmed motor vessel became involved in domestic and international politics, and in naval action that came perilously close to sending her to the bottom. The Mar Cantabrico was built at Bilbao, Spain in 1930, the beginning of a decade which saw the rise of dictatorships and the drifting of nations into a new world war. The owners of the twinscrew, diesel-powered motor vessel were Compania Maritima de! Nervion of Bilbao, in the Basque country on the shore of her namesake sea. When Spain became a republic in 1931, the Mar&#39;s colors were dutifully changed to the new tricolor design. This fluttered at her stern as she carried mixed cargo from Gulf ports of the United States to Spain and Portugal, making the westward trip in ballast. These were the days when the new Spanish Republic struggled, not always with success, to establish democracy on the Iberian peninsula. Conservative elements in Spain felt that the new government was leaning toward communism, and in July 1936 a group of army generals launched an uprising against the republic, opening the Spanish Civil War. On the high seas, individual ships&#39; crews decided whether their vessels would be &quot;Loyalist&quot; or &quot;Nationalist.&quot; In the case of the Mar Cantabrico the independence-minded Basque sailors declared &quot;for the Republic,&quot; and the freighter was placed under

orders of the legally constituted government in Madrid. For the first uncertain months of Spain&#39;s civil war, the Mar rode idly at anchor in the roadstead of Valencia, serving as a prison ship. On October 10, 1936 a decree was issued that made all Spanish merchant vessels part of the Spanish Republican Navy. Soon, under orders from the War Ministry, Captain Jose Santa Maria headed his vessel out of the Mediterranean, across the Atlantic and into New York harbor. After some drydock and engine work, he was to await cargo. The captain had no idea that the Mar Cantabrico would soon be a storm center. But down in the nation&#39;s capital the clouds were already gathering. Beginning in 1935, Congress had passed a series of &quot;neutrality laws&quot; which placed mandatory embargoes on the sale of arms to belligerents. A control board was established in the Department of State to register all arms exporters. Every foreign shipment had to be detailed, cleared and issued an export license in advance. Watchdog of the operation and head of the Office of Arms and Munitions Control was a longtime State Department official, Joseph C. Green. The Spanish Civil War became an issue in American politics when the Republic, in addition to seeking foreign aid from France and Russia, endeavored to purchase material and supplies in the United States. The existing neutrality law applied only to war between countries, and the United States government called the Spanish conflict &quot;civil strife.&quot; There was extreme pressure on Franklin D. Roosevelt, then in the midst of a presidential campaign for a second term in office, to apply neutrality legislation to Spain. Liberals and those who feared the spread of fascism (Germany

and Italy were helping the Nationalists) were meanwhile asking that the legal right of the Spanish government to buy arms not to be denied. As a stopgap, Roosevelt asked for a &quot;moral embargo&#39;&#39;, appealing to arms manufacturers and dealers to voluntarily refrain from sales to either side in Spain. The president&#39;s &quot;moral embargo&quot; worked surprisingly well for several months, and was adhered to by even the large munitions and aircraft manufacturers. The inevitable challenge came from an unexpected source. On December 24, 1936 the Vimalert Company of Jersey City, N.J. openly applied for the export of eighteen second-hand commerical transport aircraft and 411 used airplane engines. Total value of the shipment was stated to be $2, 777 ,000. The consignee was a Sr. Franciso Cruz-Salido of Bilbao, Spain. The president of Vimalert, and the man who dared to face both adverse public opinion and govermental wrath was Robert Cuse, a 37-year old naturalized American citizen. Although described by the press as a &quot;New Jersey junk dealer,&quot; Cuse was in fact something of a mechanical genius, who had built up his company by the purchase of surplus military aircraft engines for conversion to marine and commercial use. Vimalert not only resold the motors to the United States Coast Guard, but did considerable export business with the USSR. Since Russia was quietly handling some foreign purchases for the Spanish Republic, they put the Spaniards in contact with Vimalert. Despite the immediate uproar, branding him &quot;a merchant of death,&quot; Cuse stuck to his determination to sell and ship the engines he had accumulated, and the aircraft he had bought up from