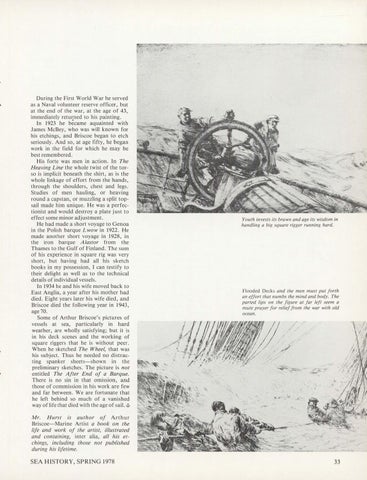 During the First World War he served as a Naval volunteer reserve officer, but at the end of the war, at the age of 43, immediately returned to his painting. In 1923 he became aquainteci with James McBey, who was will known for his etchings, and Briscoe began to etch seriously. And so, at age fifty, he began work in the field for which he may be best remembered. His forte was men in action. ln The Heaving Line the whole twist of the torso is implicit beneath the shirt, as is the whole linkage of effort from the hands, through the shoulders, chest and legs. Studies of men hauling, or heaving round a capstan, or muzzling a split topsail made him unique. He was a perfectionist and would destroy a plate just to effect some minor adjustment. He had made a short voyage to Genoa in the Polish barque Lwow in 1922. He made another short voyage in 1928, in the iron barque Alastor from the Thames to the Gulf of Finland. The sum of his experience in square rig was very short, but having had all his sketch books in my possession, l can testify to their delight as well as to the technical details of individual vessels. In 1934 he and his wife moved back to East Anglia, a year after his mother had died. Eight years later his wife died, and Briscoe died the following year in 1943, age70. Some of Arthur Briscoe&#39;s pictures of vessels at sea, particularly in hard weather, are wholly satisfying; but it is in his deck scenes and the working of square riggers that he is without peer. When he sketched The Wheel, that was his subject. Thus he needed no distracting spanker sheets-shown in the preliminary sketches. The picture is not entitled The After End of a Barque. There is no sin in that omission, and those of commission in his work are few and far between. We are fortunate that he left behind so much of a vanished way of life that died with the age of sail. w

Flooded Decks and !he men must put forth an ejforl that numbs the mind and body. The parled lips on !he figure al jar left seem a mute prayer for relief from the war wilh old ocean.

Mr. Hurst is author of Arthur Briscoe-Marine Artist a book on the life and work of the artist, i//ustrated and containing, inter alia, al/ his etchings, including ihose not published during his lifetime.