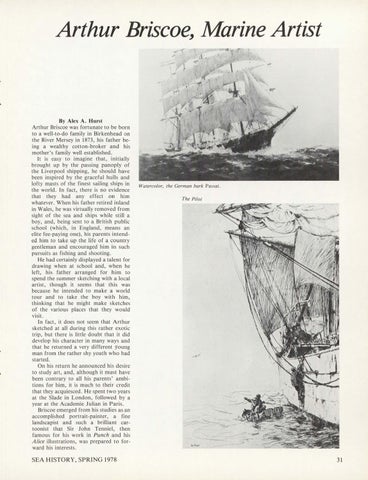 By Alex A. Hurst Arthur Briscoe was fortunate to be born to a well-to-do family in Birkenhead on the River Mersey in 1873, his father being a wealthy cotton-broker and his mother&#39;s family well established. It is easy to imagine that, initially brought up by the passing panoply of the Liverpool shipping, he should have been inspired by the graceful hulls and lofty masts of the finest sai ling ships in the world. In fact, there is no evidence that they had any effect on him whatever. When his father retired inland in Wales, he was virtually removed from sight of the sea and ships while still a boy, and, being sent to a British public school (which, in E ngland , mean s an elite fee-paying one), his parents intended him to take up the life of a country gentleman and encouraged him in such pursuits as fishing and shooting. He had certainly displayed a talent for drawing when at school and, when he left, hiS\ father arranged for him to spend the summer sketching with a local artist, though it seems that this was because he intended to make a world tour and to take the boy with him, thinking that he might make sketches of the various places that they would visit. In fact, it does not seem that Arthur sketched at all during this rather exotic trip, but there is little doubt that it did develop his character in many ways and that he returned a very different young man from the rather shy youth who had started. On his return he announced his desire to study art, and, although it must have been contrary to all his parents&#39; ambitions for him, it is much to their credit that they acquiesced. He spent two years at the Slade in London, followed by a year at the Academie Julian in Paris. Briscoe emerged from his studies as an accomplished portrait-painter, a fine landscapist and such a brilliant cartoonist that Sir John Tennie!, then famous for his work in Punch and his Alice illustrations, was prepared to forward his interests.