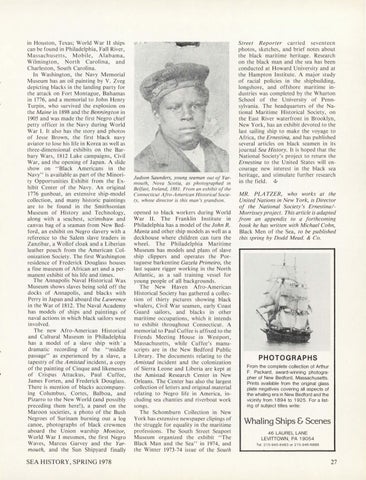 in Houston, Texas; World War II ships can be found in Philadelphia, Fall River, Massachusetts, Mobile, Alabama, Wilmington, North Carolina, and Charleston, South Carolina. ln Washington, the Navy Memorial Museum has an oil painting by V. Zveg depicting blacks in the landing party for the attack on Fort Montague, Bahamas in 1776, and a memorial to John Henry Turpin, who survived the explosion on the Maine in 1898 and the Bennington in 1905 and was made the first Negro chief petty officer in the Navy during World War I. It also has the story and photos of Jesse Brown, the first black navy aviator to lose his life in Korea as well as three-dimensional exhibits on the Barbary Wars, 1812 Lake campaigns, Civil War, and the opening of Japan. A slide show on "Black Americans in the Navy" is available as part of the Minority Opportunities Exhibit from the Exhibit Center of the Navy. An original 1776 gunboat, an extensive ship-model collection, and many historic paintings are to be found in the Smithsonian Museum of History and Technology, along with a seachest, scrimshaw and canvas bag of a seaman from New Bedford, an exhibit on Negro slavery with a reference to the Salem slave traders in Zanzibar, a Wollof cloak and a Liberian leather pouch from the American Colonization Society. The first Washington residence of Frederick Douglass houses a fine museum of African art and a permanent exhibit of his life and times. The Annapolis Naval Historical Wax Museum shows slaves being sold off the docks of Annapolis, and blacks with Perry in Japan and aboard the Lawrence in the War of 1812. The Naval Academy has models of ships and paintings of naval actions in which black sailors were involved. The new Afro-American Historical and Cultural Museum in Philadelphia has a model of a slave ship with· a dramatic recording of the "middle passage" as experienced by a slave, a tapestry of the A mis tad incident, a copy of the painting of Cinque and likenesses of Crispus Attackus, Paul Cuffee, James Forten, and Frederick Douglass. There is mention of blacks accompanying Columbus, Cortes, Balboa, and Pizarro to the New World (and possibly preceding them here!), a panel on the Maroon societies, a photo of the Bush Negroes of Surinam burning out a log canoe, photographs of black crewmen aboard the Union warship Monitor, World War I messmen, the first Negro Waves, Marcus Garvey and the Yarmouth, and the Sun Shipyard finally

Judson Saunders, young seaman out of Yarmouth, Nova Scotia, as photographed in Belfast, Ireland, 1881. From an exhibit of the Connecticut Afro-American Historical Society, whose director is this man 's grandson.

opened to black workers during World War II. The Franklin Institute in Philadelphia has a model of the John R. Manta and other ship models as well as a deckhouse where children can turn the wheel. The Philadelphia Maritime Museum has models and plans of slave ship clippers and operates the Portuguese barkentine Gaze/a Primeiro, the last square rigger working in the North Atlantic, as a sail training vessel for young people of all backgrounds. The New Haven Afro-American Historical Society has gathered a collection of thirty pictures showing black whalers, Civil War seamen, early Coast Guard sailors, and blacks in other maritime occupations, which it intends to exhibit throughout Connecticut. A memorial to Paul Cuffee is affixed to the Friends Meeting House in Westport, Massachusetts, while Cuffee's manuscripts are in the New Bedford Public Library. The documents relating to the A mistad incident and the colonization of Sierra Leone and Liberia are kept at the Amistad Research Center in New Orleans. The Center has also the largest collection of letters and original material relating to Negro life in America, incl uding sea chanties and riverboat work songs. The Schomburn Collection in New York has extensive newspaper clipings of the struggle for equality in the maritime professions. The South Street Seaport Museum organized the exhibit "The Black Man and the Sea" in 1974, and the Winter 1973-74 issue of the South

Reporter carried seventeen photos, sketches, and brief notes about the black maritime heritage. Research on the black man and the sea has been conducted at Howard University and at the Hampton Institute. A major study of racial policies in the shipbuilding, longshore, and offshore maritime industries was completed by the Wharton School of the University of Pennsylvania. The headquarters of the National Maritime Historical Society, on the East River waterfront in Brooklyn, New York, has an exhibit devoted to the last sailing ship to make the voyage to Africa, the Ernestina, and has published several articles on black seamen in its journal Sea History. It is hoped that the National Society's project to return the Ernestina to the United States will encourage new interest in the black sea heritage, and stimulate further research in the field. .:V

MR. PLATZER, who works at the United Nations in New York, is Director of the National Society's Ernestina/Morrissey project. This article is adapted from an appendix to a forthcoming book he has written with Michael Cohn, Black Men of the Sea, to be published this spring by Dodd Mead. & Co.

PHOTOGRAPHS From the complete collection of Arthur F. Packard , award-winning photographer of New Bedford, Massachusetts. Prints available from the original glass plate negatives covering all aspects of the whaling era in New Bedford and the vicinity from 1894 to 1925. For a listing of subject titles write :