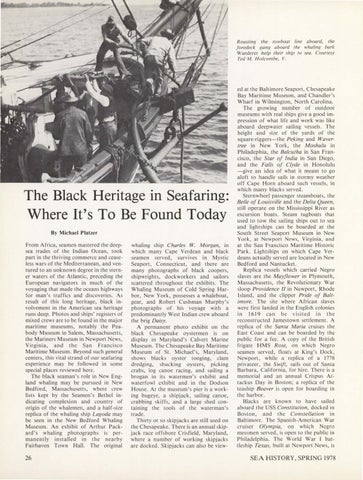 Rousting the towboat line aboard, the foredeck gang aboard the whaling bark Wanderer help their ship to sea. Courtesy Ted M. Holcombe, V.

The Black Heritage in Seafaring: Where It&#39;s To Be Found Today By Michael Platzer From Africa, seamen mastered the deepsea trades of the Indian Ocean, took part in the thriving commerce and ceaseless wars of the Mediterranean, and ventured to an unknown degree in the sterner waters of the Atlantic, preceding the European navigators in much of the voyagi ng that made the oceans highways for man&#39; s traffics and discoveries . As result of this long heritage, black involvement in the American sea heritage runs deep . Photos and ships&#39; registers of mixed crews are to be found in the major maritime museu ms, notably the Peabody Museum in Salem, Massachusetts, the Mariners Muse um in Newport News, Virginia, and the San Francisco Maritime Museum . Beyond such general centers, this vi tal strand of our seafaring experience ma y be followed in so me special places reviewed here. The black seaman&#39; s role in New England whaling may be pursued in New Bedford, Massachusetts, where crew lists kept by the Seamen&#39;s Bethel indicating complexion and country of origin of the whalemen, and a half-si ze replica of the whaling ship Lagoda may be seen in the New Bedford Whaling Museum. An exhibit of Arthur Packard&#39;s whaling photographs is permanently in sta lled in the nearby Fairhaven Town Hall. The original

whaling ship Charles W. Morgan, in which many Cape Verdean and black seamen se rve d, survives in Mystic Seaport, Connecticut, and there are many photographs of black coopers, shipwrights, dockworkers and sailors scattered throughout the exhibits. The Whaling Museum of Cold Spring Harbor, New York, possesses a whaleboat, gear, and Robert Cushman Murphy&#39;s photographs of his voyage with a predominantly West Indian crew aboard the brig Daisy . A permanent photo exhibit on the black Chesapeake oystermen is on display in Maryland &#39;s Calvert Marine Museum. The Chesapeake Bay Maritime Museum of St. Michael&#39;s, Maryland , shows blacks oyster tongin g, clam dredging, shucking oysters, picking crabs, log canoe racing, and sailing a brogan in its watermen&#39;s exhibit and waterfowl exhibit and in the Dodso n House. At the muse um&#39; s pier is a working bugeye, a shipjack, sailing canoe, crabbing skiffs, and a large shed containing the tools of the waterman&#39;s trade. Thirty or so sk ipjacks are still used on the Chesapeake. There is an annual skipjack race offshore Crisfield, Maryland, where a number of working skipjac ks are docked. Skipjacks can also be view-

ed at the Baltimore Seaport, Chesapeake Bay Maritime Museum, and Chandler&#39;s Wharf in Wilmington, North Carolina. The growing number of outdoor museums with real ships give a good impression of what life and work was like aboard deepwater sailing vessels. The height and size of the yards of the square-riggers-the Peking and Wavertree in New York, the Moshulu in Philadephia, the Balcutha in San Francisco, the Star of India in San Diego, and the Falls of Clyde in Honolulu -give an idea of what it meant to go aloft to handle sails in stormy weather off Cape Horn aboard such vessels, in which many blacks served. Sternwheel passenger steamboats, the Belle of Louisville and the Delta Queen, still operate on the Mississippi River as excursion boats. Steam tugboats that used to tow the sailing ships out to sea and lightships can be boarded at the South Street Seaport Museum in New York, at Newport News, Virginia, and at the San Francisco Maritime Historic Park. Lightships on which Cape Verdeans actually served are located in New Bedford and Nantucket. Replica vessels which carried Negro slaves are the Mayflower in Plymouth , Massac husetts, the Revolutionary War sloop Providence II in Newport, Rhode Island, and the clipper Pride of Baltimore. The site where African slaves were first landed in the English colonies in 1619 can be visited in the reconstructed Jamestown settlement. A replica of th e Santa Maria cruises the East Coast and can be boarded by the public for a fee. A copy of the British frigate HMS Rose, on which Negro seamen served, floats at King&#39;s Dock, Newport, while a replica of a 1778 privateer, the Swift, sa ils out of Santa Barbara , California, for hire . There is a memorial and an annual Crispus Attackus Day in Boston; a replica of the teaship Beaver is open for boarding in the harbor. Blacks are known to have sailed aboa rd the USS Constitution, docked in Boston , and the Constellation in Baltimore. The Spanish-American War c rui ser Olympia, on which Negro mess men served, is open to the public in Philadelphia. The World War 1 battl es hip Texas, built at Newport News, is