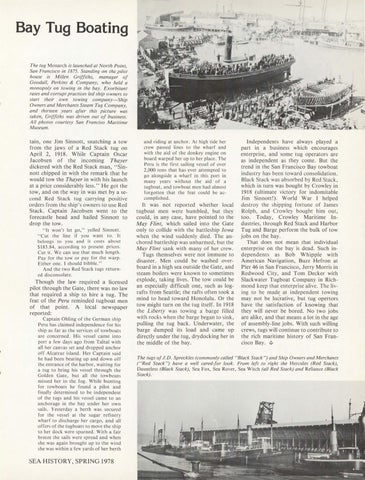 Bay Tug Boating The tug Monarch is launched at North Point, San Francisco in 1875. Standing on the pilot house is Millen Griffiths, manager of Goodall, Perkins &amp; Company, who held a monopoly on towing in the bay. Exorbitant rates and corrupt practices led ship owners lo start their own lowing company-Ship Owners and Merchants Steam Tug Company, and thirteen years after this picture was taken, Griffiths was driven out of business. All photos courtesy San Franciso Maritime Museum.

tain, one Jim Sinnott, snatching a tow from the jaws of a Red Stack tug on April 2, 1918. While Captain Oscar Jacobsen of the incoming Thayer dickered with the Red Stack man, &quot;Sinnott chipped in with the remark that he would tow the Thayer in with his launch at a price considerably less.&quot; He got the tow, and on the way in was met by a second Red Stack tug carrying positive orders from the ship&#39;s owners to use Red Stack. Captain Jacobsen went to the forecastle head and hailed Sinnott to drop the tow. &quot;It won&#39;t let go,&quot; yelled Sinnott. &quot;Cut the line if you want to. It belongs to you and it costs about $183 .84, according to present prices. Cut it. We can use that much length. Pay for the tow or pay for the warp. Either one. I should bibble.&quot; And the two Red Stack tugs returned disco nso late.

Though the law required a licensed pilot through the Gate, there was no law that required a ship to hire a tug. The feat of the Peru reminded tugboat men of that point. A local newspaper reported: Captain Ohling of the German ship Peru has claimed independence for hi s ship as far as the serv ices of towboats are concerned. His vessel came into port a few days ago from Taltal with all her canvas set and dropped anchor off Alcatraz island. Her Capta in sa id he had been beating up and down off th e entrance of the harbor, wait in g for a tug to bring his vessel through the Golden Gate, but a ll the towboats missed her in the fog. While hunting for towboats he found a pilot and finally determined to be independent of the tugs and his vessel came to an anchorage in the bay under her own sai ls. Yesterday a berth was sec ured for the vessel at the sugar refinery wharf to discharge her cargo, and all offers of the tugboats to move the ship to her dock were spurned. With a fair breeze the sails were spread and when she was again brought up to the wind she was within a few yards of her berth

and riding at anchor . At high tide her crew passed lines to the wharf and with the aid of the donkey engine on board warped her up to her place. The Peru is the fir st sa iling vessel of over 2,000 tons that has ever attempted to go alongside a wharf in this port in many years without the aid of a tugboat, and towboat men had almost forgotten that the feat co uld be accomplished.

It was not reported whether local tugboat men were humbled, but they could, in any case, have pointed to the May Flint, which sailed into the Gate only to collide with the battleship Iowa when the wind suddenly died. The anchored battleship was unharmed, but the May Flint sank with many of her crew. Tugs themselves were not immune to disaster. Men cou ld be washed overboard in a high sea outside the Gate, and steam boilers were known to sometimes explode, taking lives . The tow could be an especially difficult one, such as lografts from Seattle; the rafts often took a mind to head toward Honolulu. Or the tow might turn on the tug itself. In 1918 the Liberty was towing a barge filled with rocks when the barge began to sink, pulling the tug back. Underwater, the barge dumped its load and came up directly under the tug, drydocking her in the middle of the bay.

Independents have a lways played a part in a business which encourages enterprise, and some tug operators are as independent as they come. But the trend in the San Francisco Bay towboat industry has been toward consolidation. Black Stack was absorbed by Red Stack, which in turn was bought by Crowley in 1918 (ultimate victory for indomitable Jim Sinnott!). World War I helped destroy the shipping fortune of James Rolph, and Crowley bought him out, too. Today, Crowley Maritime Industries, through Red Stack and Harbor Tug and Barge perform the bulk of tow jobs on the bay. That does not mean that individual enterprise on the bay is dead. Such independents as Bob Whipple with American Navigation, Buzz Hefron at Pier 46 in San Francisco, Jerry Morris in Redwood City, and Tom Decker with Slackwater Tugboat Company in Richmond keep that enterprise alive. The living to be made at independent towing may not be luc.rative, but tug opertors have the satisfaction of knowing that they will never be bored. No two jobs are alike, and that means a lot in the age of assemb ly-line jobs. With such willing crews, tugs will continue to contribute to the rich maritime history of San Francisco Bay . .V