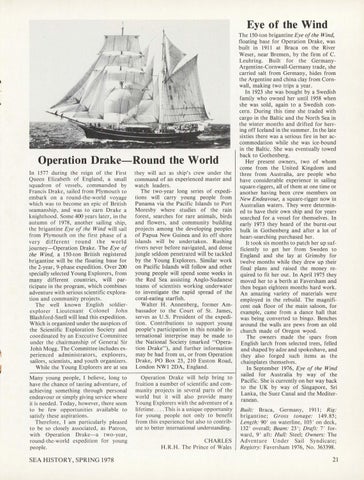 Eye of the Wind

Operation Drake-Round the World In 1577 during the reign of the First Queen Elizabeth of England, a small squadron of vessels, commanded by Francis Drake, sailed from Plymouth to embark on a round-the-world voyage which was to become an epic of British seamanship, and was to earn Drake a knighthood. Some 400 years later, in the autumn of 1978, another sailing ship, the brigantine Eye of the Wind will sail from Plymouth on the first phase of a very different round the world journey-Operation Drake. The Eye of the Wind, a 150-ton British registered brigantine will be the floating base for the 2-year, 9-phase expedition. Over 200 specially selected Young Explorers, from many different countries, will participate in the program, which combines adventure with serious scientific exploration and community projects. The well known English soldierexplorer Lieutenant Colonel John Blash ford-Snell will lead this expedition. Which is organized under the auspices of the Scientific Exploration Society and coordinated by an Executive Committee under the chairmanship of General Sir John Mogg. The Committee includes experienced administrators, explorers, sailors, scientists, and youth organizers. While the Young Explorers are at sea

they will act as ship&#39;s crew under the command of an experienced master and watch leaders. The two-year long series of expeditions will carry young people from Panama via the Pacific Islands to Port Moresby where studies of the rain forest, searches for rare animals, birds and flowers, and community building projects among the developing peoples of Papua New Guinea and its off shore islands will be undertaken. Rushing rivers never before navigated, and dense jungle seldom penetrated will be tackled by the Young Explorers. Similar work on Pacific Islands will follow and other young people will spend some weeks in the Red Sea assisting Anglo-Sudanese teams of scientists working underwater to investigate the rapid spread of the coral-eating starfish. Walter H. Annenberg, former Ambassador to the Court of St. James, serves as U.S. President of the expedition. Contributions to support young people&#39;s participation in this notable international interprise may be made to the National Society (marked &quot;Operation Drake&quot;), and further information may be had from us, or from Operation Drake, PO Box 23, 210 Euston Road, London NW! 2DA, England.

Many young people, I believe, long to have the chance of tasting adventure, of achieving something through personal endeavour or simply giving service where it is needed. Today, however, there seem to be few opportunities available to satisfy these aspirations. Therefore, I am particularly pleased to be so closely associated, as Patron, with Operation Drake-a two-year, round-the-world expedition for young people.

Operation Drake will help bring to fruition a number of scientific and community projects in several parts of the world but it will also provide many Young Explorers with the adventure of a lifetime .... This is a unique opportunity for young people not only to benefit from this experience but also to contribute to better international understanding.

CHARLES H.R.H. The Prince of Wales

The 150-ton brigantine Eye of the Wind, floating base for Operation Drake, was built in 1911 at Braca on the River Weser, near Bremen, by the firm of C. Leuhring. Built for the GermanyArgentine-Cornwall-Germany trade, she carried salt from Germany, hides from the Argentine and china clay from Cornwall, making two trips a year. In 1923 she was bought by a Swedish family who owned her until 1958 when she was sold, again to a Swedish concern. During this time she traded with cargo in the Baltic and the North Sea in the winter months and drifted for herring off Iceland in the summer. In the late sixties there was a serious fire in her accommodation while she was ice-bound in the Baltic. She was eventually towed back to Gothenberg. Her present owners, two of whom come from the United Kingdom and three from Australia, are people who have considerable experience in sailing square-riggers, all of them at one time or another having been crew members on New Endeavour, a square-rigger now in Australian waters. They were determined to have their own ship and for years searched for a vessel for themselves. In early 1973 they heard of the burnt-out hulk in Gothenberg and after a lot of heart-searching purchased her. It took six months to patch her up sufficiently to get her from Sweden to England and she lay at Grimsby for twelve months while they drew up their final plans and raised the money required to fit her out. In April 1975 they moved her to a berth at Faversham and then began eighteen months hard work. An amazing variety of materials were employed in the rebuild. The magnificent oak floor of the main saloon, for example, came from a dance hall that was being converted to bingo. Benches around the walls are pews from an old church made of Oregon wood. The owners made the Âˇspars from English larch from selected trees, felled and shaped by adze and spokeshave, and they also forged such items as the chainplates themselves. In September 1976, Eye of the Wind sailed for Australia by way of the Pacific. She is currently on her way back to the UK by way of Singapore, Sri Lanka, the Suez Canal and the Mediterranean.